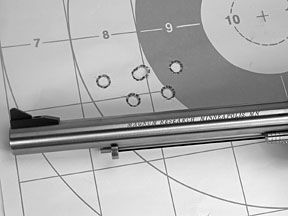 The market for big revolvers is actually rather small. The biggest-selling revolvers are smaller models that offer concealment or portability as well as simplicity. For hunting, a revolver or any other handgun should be of the largest caliber one can shoot for the sake of a quick kill. Then again, some very big revolvers are for the hunted. Super calibers like the .454 Casull and .480 Ruger can function as a more portable alternative to a rifle or shotgun in places like Alaska, where being surprised by a bear in your driveway isn’t out of the question. Revolvers that shoot a rifle caliber are another way to go because rifle ammunition may indeed be cheaper and more plentiful than a specialty round like the .454 Casull or 480 Ruger. When Magnum Research expanded its line of BFR (biggest, finest revolvers) products to include models that chamber the .45-70 Government and .450 Marlin we decided to test them. First, we wanted to know if the guns themselves could stand up to these cartridges. We also wanted to see how much accuracy could be achieved when these rounds were placed in a revolver instead of a rifle. Here’s what we found.

In terms of appearance and design, both our .45-70 and .450 Marlin BFR revolvers shared identical features. Each gun measured just less than 16 inches in length and weighed in at a healthy 76 ounces. Construction was stainless steel throughout, and the grips were a comfortable two-piece rubber design. Each gun came with a fully adjustable rear sight and quick-change front sight. These were single-action-only guns with heavy, round stainless-steel barrels. The outer diameter of the barrel on each gun was the same, but the width of the inner wall of the barrel varied with the diameter of the caliber. The crown of each barrel was recessed approximately 0.030 inch. Viewed from the muzzle, the ejector rod assembly was located at 8 o’clock. Ejection was smooth and sure. To accommodate the long rounds, the cylinders are inordinately long, making the guns look odd. The flat-topped frame that contains these 25-ounce cylinders measured almost 4.75 inches in length.

To load these guns does not require pulling back the hammer. Opening the loading gate allows the cylinder to turn freely for filling or emptying the chambers. With the hammer pulled back, the gate is prevented from being opened. This way the guns cannot be loaded while the hammer is back, preventing accidental discharge. Power was supplied to the hammer with a heavy coil spring. The trigger-pull weight on our .45-70 model was a smooth 4.5 pounds. In terms of action, we like the word “consistent” better than “crisp” to describe this BFR’s trigger.

We fired three different rounds through this gun with results that were, once again, consistent and in some ways predictable. Our two semi-jacketed 300-grain rounds each produced five-shot groups under 2.0 inches in diameter. The Federal cartridge topped with Speer’s HOT-COR bullet (Federal and Speer belong to the same company) recorded 2.0-inch average group sizes. On average, the Federal product traveled 1390 fps, some 60 fps faster than the Winchester Super X. Although the Federal round was more consistent, the Winchester round produced the smallest group of our sessions, measuring just 1.7 inches. Two-inch groups at 50 yards with open sights and a whole lot of power is some good shooting. The big, fat 405-grain lead bullets from PMC shot groups that varied considerably by comparison, but still averaged right at 3.0 inches. Actually, we’d shy away from this round for use in the BFR or other revolvers.

Firing the PMC lead flat-point bullets, it wasn’t long before we experienced difficulty loading the rounds fully into the chambers. In fact we found two different reasons why this happened. First, the lead from the bullets was collecting in the chambers. Also, we found that some of the PMC rounds would enter a given chamber and another would not. This could signify a bulge in the surface of the lead bullet just ahead of the crimp, or as we suspect, there was actually a bulge in the case at the web. Still, this round was pleasant to shoot and produced excellent power. The heavier, slower-moving 405-grain bullet forced us to change the front sight to a taller model. This was very easy to do, and the single screw held the alternate front-sight blade firmly in place. We followed up this coarse change in elevation with fine-tuning at the rear sight. We enjoyed the BFR in .45-70 because it was powerful enough to give us a thrill but not so punishing that we couldn’t prepare for it. Yes, we wore a PACT shooting glove on our strong hand and a less padded Uncle Mike’s on our left hand, but the gun shot so well we didn’t mind.

Unfortunately, our .45-70 BFR suffered a serious problem. Each time we stroked back the hammer the gun played “Wheel of Fortune” and spun out of control, unable to catch the cylinder stop. To complete the test we had to carefully pull back the hammer and correct the indexing until it clicked into place. The gun never came out of battery during fire, but the hammer would sometimes lock back with the cylinder out of sync. The reason: Probably a weak cylinder stop spring. Still, we feel an overhaul of the cylinder stop is in order. For one, the notch in the cylinder could have been bigger. In fact, the notch cut into the cylinder of the .450 Marlin BFR is measurably bigger. Compared to the cylinder notch found on two different .38Spl/. 357 Magnum revolvers we had on hand, the BFR notches were narrower and only slightly deeper. Suffice it to say that a 25-ounce cylinder that packs a rifle cartridge should be fit with a much heavier lockup.

The .450 Marlin BFR had only three features or characteristics that distinguish it from the .45-70 model. This model offered a much sturdier lockup, and the trigger was not as pleasing. Although the action on this gun required only a half pound more pressure, we felt as though we were bending the trigger like a torsion bar prior to let-off. But we do not think this was completely responsible for the difference in accuracy between the two models. This, we believe, was the result of the .450 Marlin’s level of power that we found to be less controllable. Looking at the exact figures, an average five-shot group measuring only 2.7 inches is very good at this distance with open sights. But an average of 2.0 inches is much tougher to achieve, and the single 2.0-inch group we fired with the .450 Marlin BFR required much more work, especially in terms of follow through, than any of the sub-2-inch groups we fired with the .45-70. The power of .450 Marlin ammunition made shooting this gun both tiring and painful. We did our best to avoid the effects of this powerful ammunition by having one shooter fire preliminary shots across our Oehler 35P chronograph and another shooter fire the groups of record. Each of our testers required the use of padded gloves, and our accuracy shooter even bound his strong-hand wrist for support and protection from injury.

We think the BFR chambered in .450 Marlin isn’t the best choice. It is too difficult to control, and it is too punishing for the shooter. Also, .450 Marlin ammunition is costly and not widely available.

Magnum Research .45-70 BFR, $999. Conditional Buy. This is perhaps the most accurate and consistent of the BFR series we’ve tested so far, and .45-70 is probably the best match of caliber and BFR design. However, the cylinder stop needs to be strengthened, in our view.

Magnum Research .450 Marlin, $999. Conditional Buy. The 450 Marlin enjoys a heavier cylinder stop than the .45-70 model. It proved more secure, but the power and recoil of this gun will interfere with most shooters’ ability to enjoy it or shoot it with accuracy.

Also With This Article 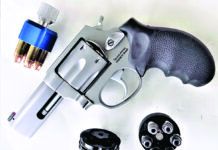 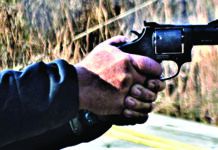