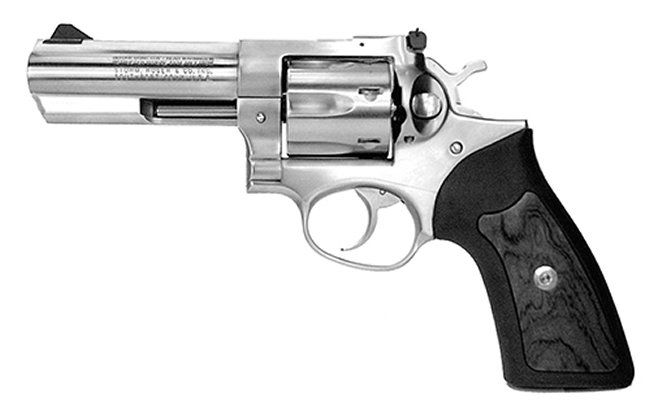 We recently attended a major sporting event where security was provided by uniformed police. We couldn’t help but notice how many officers, male and female were carrying revolvers instead of semi-automatic pistols. Never shy to interview, we took turns asking various officers why they had chosen a revolver. Here are some of the reasons they gave. “It can’t be knocked out of battery.” “The trigger doesn’t change after the first shot.” “I can get a really good action without worrying about reliability.” “It was easy to find a replacement grip that fit me.” “No mags to buy and this gun will last.” “It didn’t need any work to make it more accurate.” Most of the guns we saw were .38 Special/.357 Magnums, which offer a wide range of power without affecting reliability.

There are many different types of .38 Special and .357 Magnum ammunition currently available. We decided to bypass frangible or other types of specialty rounds in favor of more traditional loads. First, we chose 148-grain lead wadcutters from Black Hills Ammunition. This is a classic target load, and in our opinion one of the most accurate over-the-counter rounds you can buy. Our choice of magnum ammunition consisted of American Eagle 158-grain jacketed soft point rounds by Federal, and Black Hills 125-grain jacketed hollow points.

Members of our test team collected accuracy data by firing the gun single action only from a sandbag rest at a distance of 25 yards. We documented our group sizes by taking measurements from center to center of the two widest hits inside a five-shot group. In addition, we fired standing unsupported at a cardboard IPSC silhouette target double action only from a distance of 7 yards. This part of our tests was performed with PMC 150-grain JHP .357 Magnum ammunition.

The purpose of our single-action test was to determine fine accuracy. The double-action test was designed to tell us more about recoil and trigger control. By engaging the target five separate times with two shots to the body and one to the head, we used the pattern of hits to help us evaluate rapid-fire capability.

Ruger lists seven different models in the GP100 family with barrel lengths of 3, 4, and 6 inches. Finishes are either blued or stainless steel. Manufacturer’s suggested retail prices range from $552 for the .38 Special +P only models to $615 for the stainless steel .357 Magnum revolvers with barrel lengths of either 4 or 6 inches. All models come with a rubber grip complete with a rosewood insert. Our 4-inch barreled KGP-141 had a pleasing bright-stainless finish and an adjustable rear sight. Elevation was the familiar clockwise for down and counter clockwise for raising the point of impact. The windage adjustment required opposite movement for changing point of impact.

A second, very small screwdriver was required to turn the windage-adjustment screw. The rear-sight blade was partially protected from impact by riding back and forth inside the body of the unit. The rear notch was accented with white trim. The front sight on our Ruger was a black ramp grooved to reduce glare and dovetailed into place.

This is not the only feature on the Ruger revolver that distinguished it. The top of the barrel shroud was flat and grooved. The shooter pressed the cylinder release rather than slid it forward. The full-length ejector rod played no part in lockup, but a heavy detent mounted on the forward surface of the crane meshed with the frame. The Ruger featured a full-length underlug and overall gave the impression of being overbuilt. The cylinder lugs, for example, were deeper and wider than those found on other guns. The grip was in fact a rubber sleeve that covered the butt frame that also housed the coil mainspring. It was held in place by a barrel-shaped lug captured by the rosewood inserts. The inserts had to be removed from each side and the lug pushed through before the rubber portion of the grip could be slid off of the frame.

Tthe Ruger mixed squared edges, such as at the trigger and the hammer, with graceful sweeping lines on the barrel and behind the cylinder. The Ruger revolver did not offer an internal safety lock. A padlock designed to pass through a single chamber with the cylinder swung away from the frame was supplied.

The trigger on our KGP-141 revolver weighed in at about the same as our Smith & Wesson, but the feel was much different. The single action was smooth, but had a more pronounced let off. The Ruger double action was smoother from start to finish with the same felt resistance each time. Starting and stopping the cylinder produced little interference. This was followed by the smallest touch of stacking, which indicated the coil mainspring was fully loaded. Our shots fired double action formed the best group at center mass in our rapid-fire test. Four out of five shots to the head area formed the tightest group as well. From the bench our single-action-only shots averaged 1.7 inches firing both the hottest loads (the 125-grain magnums) and lightest, the Black Hills Match Wadcutters. But even in the case of firing the 158-grain .357 Magnum JSP loads, the difference between smallest and largest group was very narrow.

Given the fact that our accuracy test was performed under overcast skies with light rain, we would judge the sights on the Ruger revolver to be the best among our three guns. Due to the clear, rugged design of the sights combined with the consistency of the trigger, in both single and double action, we never lacked confidence firing the Ruger GP100 revolver.

Our Pick. The Ruger may only be a six-shooter, but we think it functioned with the most consistency and would likely offer the most durability. The front sight can be easily replaced and the adjustable rear sight was built to last. The ejector rod was shrouded, lockup was braced, and the GP100 shot with the least amount of muzzle flip.