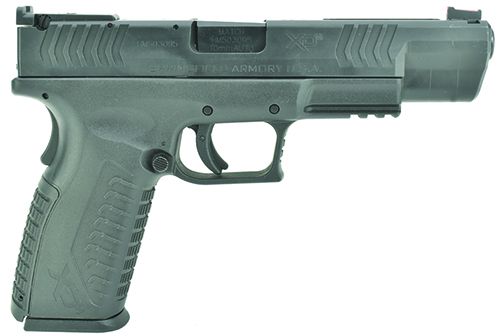 The XD-M is made in Karlovac, Croatia by HS Product and has been imported by Springfield Armory since 2002. The match version (the reason for the “M” suffix) was introduced in 2009. Various XD iterations have been tested by Gun Tests over the years to very good reviews. The 10mm chambering was added in late 2018 and was no exception. Check out the Springfield video at TheArmoryLife.com that documents a 10,000-round torture test the pistol went through before introduction.

The XD-M is a polymer-framed, striker-fired pistol with a Melonite-finished stainless-steel slide. We secured a sample with the 5.25-inch barrel. It employs the same concepts on slide design that the 9mm and 40 S&W versions designed for USDPSA/IDPA use. The slide is longer to put more weight out front to help with recoil control and improve sight radius. But because Springfield doesn’t really want to add too much weight out there, there is a slot milled out of the top of the slide a la the Glocks 34 and 35. The lighter reciprocating mass also lessens muzzle movement as the slide cycles. Two very visible sights, in the form of a low-profile fully-adjustable rear and fiber optic front, are mounted on the pistol. As is normal with XDs, the pistol also mounts a striker-status indicator on the rear of the slide, which protrudes if the striker is cocked. There is also a loaded-chamber indicator, which is a small lever that angles up from the slide at the rear of the barrel hood when a cartridge is present in the chamber. The design provides three safeties; grip, trigger, and firing-pin block. The trigger requires fairly little movement in compression, especially for a polymer-framed pistol. While not the equal of a tuned 1911 trigger, the XD-M trigger was very usable, only requiring an average of 5.6 pounds for compression. 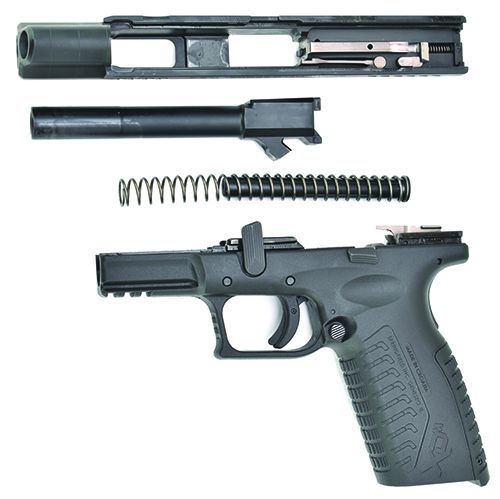 The XD-M is a polymer-framed striker-fired pistol with a Melonite-finished stainless-steel slide. The 5.25-inch barrel sits inside a longer slide that puts more weight out front to help with recoil control and sight radius. A slot milled out of the top of the slide has a lighter reciprocating mass that also lessens muzzle movement as the slide cycles. The frame has a three-groove Picatinny rail molded in, along with the older-style grip surface. Our XD-M came with the older style, big-bump texturing. The trigger guard is large with plenty of room for a gloved hand. 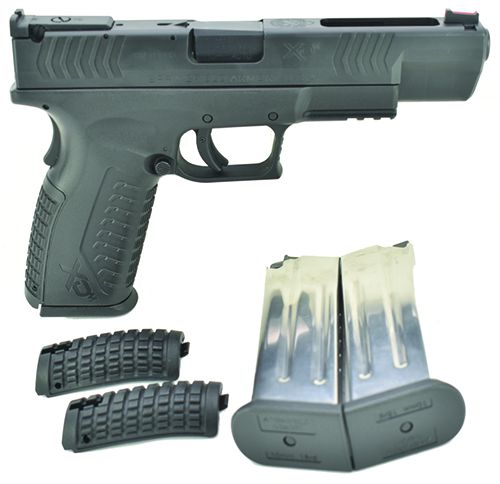 The XD-M comes with grip inserts that allow shooters to customize the fit for their own hands. 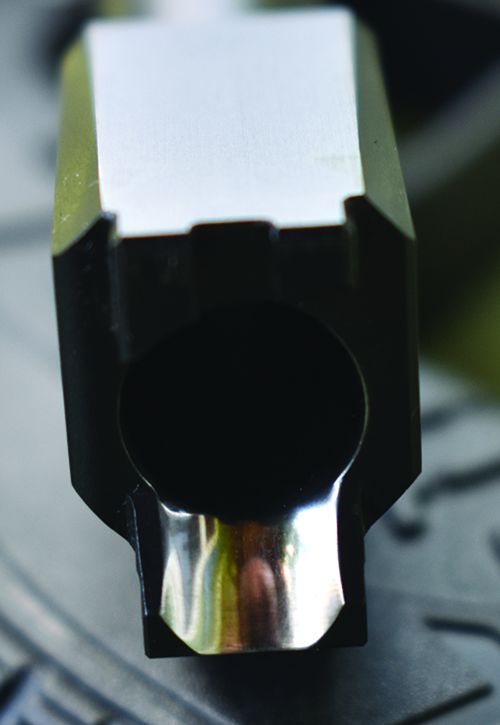 The brightly polished feed ramp of the XD-M is just one of the match features added to this pistol. 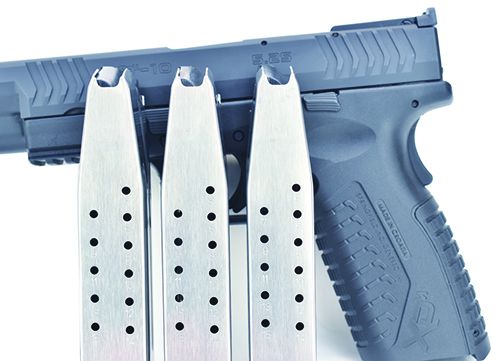 The XD-M comes out of the box with the most opportunity for firepower. Three double-stack 15-round stainless- steel magazines is impressive. We would like to see three magazines as the baseline amount provided with any handgun. One is not enough. 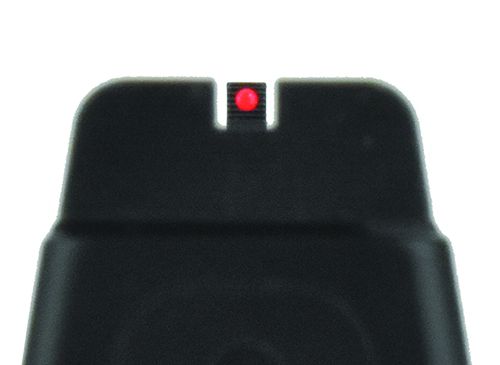 This is the slot milled out of the top of the Springfield’s slide, a la the Glocks 34 and 35.

The slide has cocking serrations fore and aft. The frame has a three-groove Picatinny rail molded in along with the older-style grip surface. Our XD-M came with the older style big-bump texturing. We’ve remarked in the past on how we like the new XD Mod 2.0 grip. It would be interesting to test this pistol with the new style and see how the most recent grip feels in our hands during recoil.

The trigger guard is large with plenty of room for a gloved hand. The XD-M offers a truly ambidextrous mag release with buttons on both sides. The magazine well is beveled for easy reloading.

Takedown on the XD-M is simple. Remove the magazine. Make sure the pistol is unloaded. Lock the slide open and rotate the takedown lever 90-degrees clockwise. The upper part of the assembly will slide forward where the recoil spring (mounted on a full-length guide rod) and the barrel can be removed. The grip safety must be depressed before the slide can be locked to the rear, but it does not matter whether the striker is cocked or not. You do not have to press the trigger to drop the striker before disassembly.

Our sample arrived in a box that could easily double as a very secure carrying case. It contained all the required paperwork and safety lock along with a total of three 15-round magazines and two additional sizes of grip inserts.

We wish we had the test-ammo budget that Springfield has, but that is not the case. So, we didn’t get to run 10,000 rounds through the XD-M as shown in their video, but everything we did try cycled perfectly. Recoil was a little snappier than the heavier pistols, though not as much as we thought might happen. As is usual, the polymer frame itself flexes and helps soak up some of that movement. Interestingly, the XD-M had higher muzzle velocity with three of the four ammo selections than the Colt and with all four vs. the SIG.

Picking a favorite is tough when we have four quality firearms. The Colt won the first speed test and the SIG won the second. Results for each particular test of the three semi-auto pistols were within about 0.6 seconds. We didn’t think that was statistically significant. Double-action shooting with the Smith & Wesson was a bit slower, but that was no surprise or problem.

Our Team Said: To come up with recommendations, we had to think situationally, such as if “X” were the situation, we would prefer “Y” gun for “reasons.” For example, if we were looking for a duty pistol where firepower was a huge factor, or if we were backpacking where we were going to carry one firearm and weight was really a consideration, we would pick the XD-M.