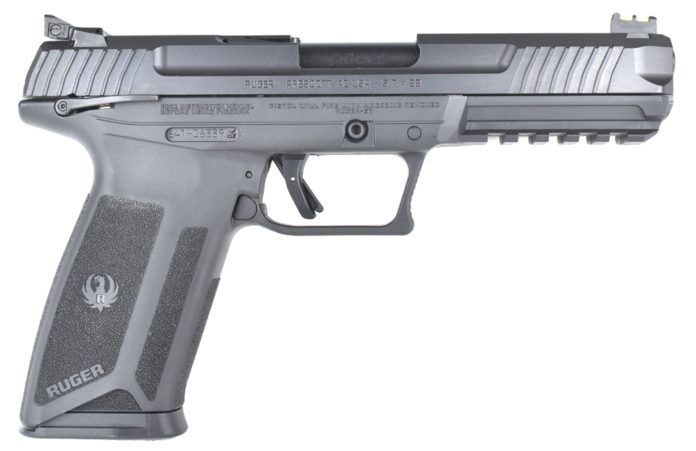 The Ruger-57 is a hammer-fired delayed-blowback semi-auto pistol. When the trigger is pressed, the pistol fires essentially single-action with the barely-visible internal hammer having been cocked by the reciprocating alloy-steel slide. Unlike most blowback designs, where the barrel is fixed, the barrel on the 57 moves to the rear for a short distance (about 0.25 inch) in step with the slide. By that point, the bullet has left the muzzle and pressure has dropped enough to allow the breech to open. The slide continues to the rear, ejecting the spent case and stripping another off the magazine as it moves forward to begin the cycle again. In contrast to a tilting-barrel lockup, with its mechanical connection to the slide for a short time, the Ruger-57 relies on slide mass/weight and spring pressure to keep the chamber sealed while pressure drops. Because of that, spring pressure is a bit heavy, and the weight of the slide is critical. The top of the forward end of the slide has been milled out, and about 50% of the length of the slide sports a scalloped area that further reduces weight. The lower mass of the slide not only helps reliability for the 57, it also allows for less muzzle flip. This pistol just did not move much when we pressed the trigger. The slide also has curved grooves cut fore and aft as cocking serrations. The internal hammer is visible through a port in the rear of the slide. 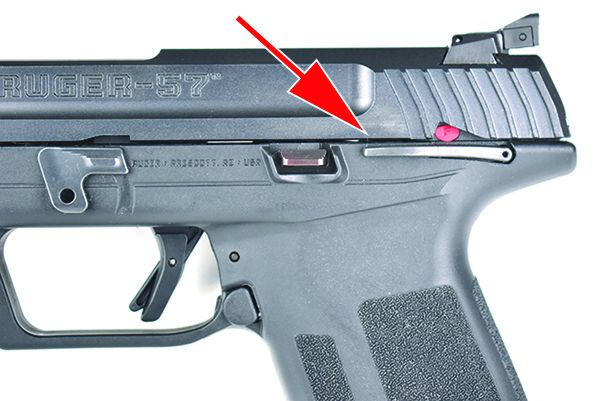 The feel of the Ruger grip and controls remind us of a 1911. The lever safety has a positive feel engaging or disengaging. 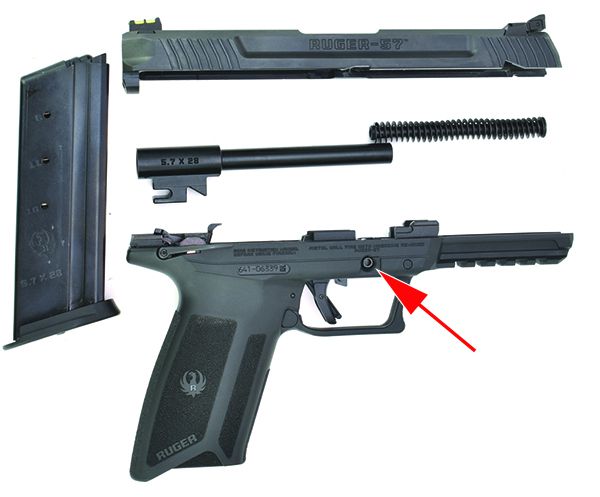 Field-stripping the Ruger is easy. Push this pin through from right to left, rotate the pin, then lift off the slide assembly. 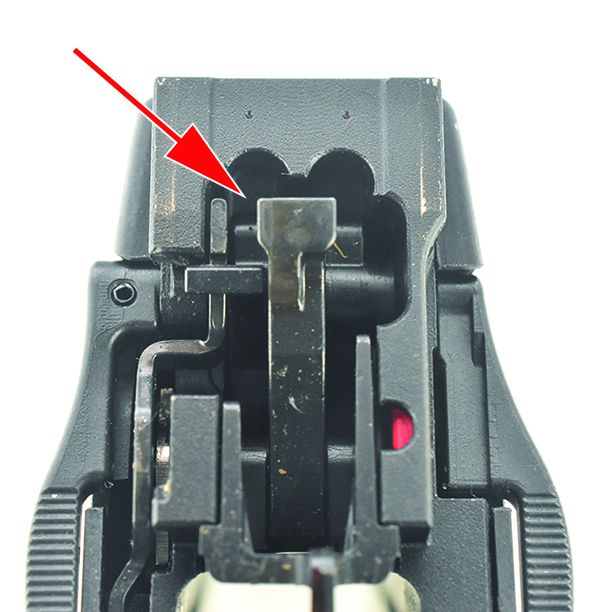 In spite of its appearance, the Ruger is a hammer-fired pistol. The hammer is simply enclosed inside the gun.

The top of the forward end of the Ruger’s slide has been milled out and about 50% of the length of the slide sports a scalloped area that further reduces weight. The lower mass of the slide helps reliability, yet it doesn’t increase muzzle flip. 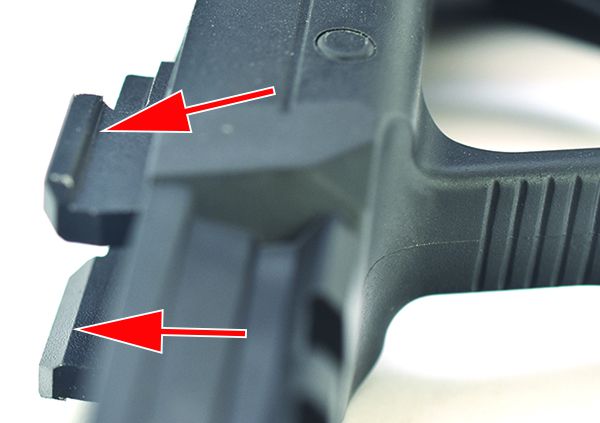 The chassis and rails built into the Ruger-57 are a great aid to accuracy and dependability. 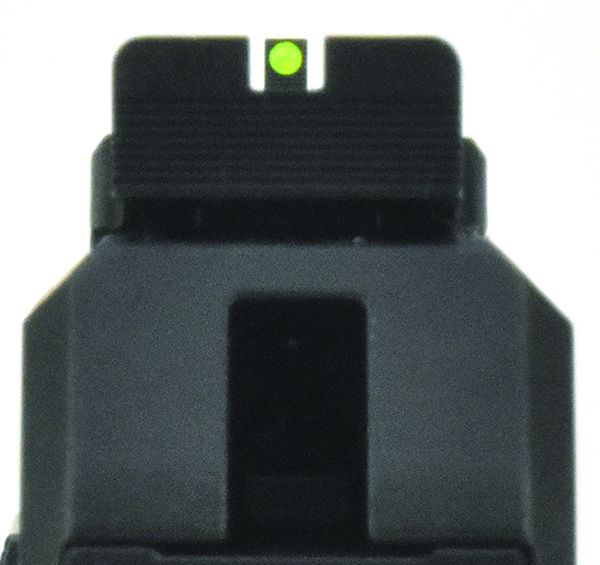 The luminous green dot of the Ruger-57 is easy to see and place on a target black. 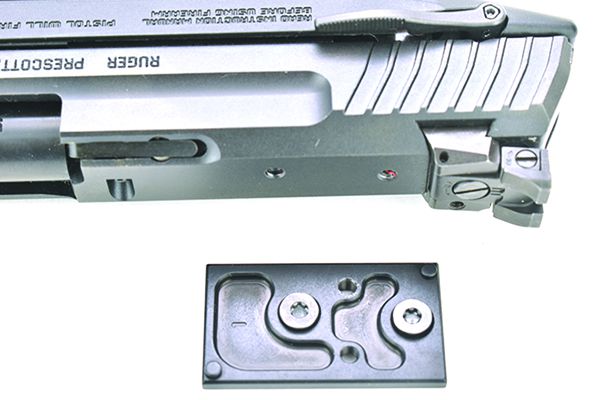 The Ruger is drilled and tapped for a red-dot base. Order the base for the sight you need from Ruger.com.

The 57 arrived with a great set of sights. The rear is a fixture, mounted in a dovetail, that is adjustable for elevation and windage. The front sight is a well-protected fiber-optic tube, also in a dovetail. The front is big enough to see without totally filling the rear sight notch — an arrangement we prefer. The top of the slide is drilled and tapped for adapter plates that can be used with most of the current crop of red-dot sights. None of those are supplied with the pistol, but they can be ordered at ShopRuger.com. Be sure you get the right mounting screws from the manufacturer of your red-dot sight.

Takedown is a bit interesting, but there are great pictures in the owner’s manual, so you shouldn’t have any issues at all. Remove the magazine. Check to make sure the chamber is empty. Check again. Lock the slide to the rear and look on the right side of the frame. You will find a hollow pin projecting just above and forward of the trigger. Use some non-marring tool and depress that pin, pushing right to left. This motion extends the takedown lever on the left side of the frame to the point where it is accessible. Rotate the lever 90 degrees clockwise and stop. Do not over rotate. Depress the slide stop, allowing the slide to move forward. When the slide looks like it is about a quarter-inch ahead of where it would be while in battery, you should be able to gently lift the slide off. Lift out the captured recoil spring from the rear. Remove it and the barrel, and you’re done. Reassemble in reverse order.

With the slide removed, the working parts are exposed. The shooter will find a fire-control group CNC milled from aluminum nestled in a glass-filled nylon frame. The frame has ambidextrous thumb safeties that are a bit on the thin side, but they worked well for us. Anyone remotely familiar with 1911-style safeties should be right at home with these. The pistol uses Ruger’s Secure Action Trigger with the trigger-mounted blade safety. We found the trigger to be of a reasonable weight, but a bit creepy. Initial take up required about a half-inch of movement, and reset was a bit long, but that may be getting picky.

The extractor is a hinged, external setup that contacts the case at about 11 o’clock as you look at the breech face. The ejector is frame-mounted and rides through a slot impinging on the empty case at about the 6 o’clock position. Not what we might consider normal, but that appears to be the only place the engineers had to put them. There isn’t much working room on the inside of the 57. We are also accustomed to replacing barrels on pistols like this where they fit down into some type of notch in the frame. The 57 uses a slightly different fit and can rotate a good bit when lowered into the frame. No big deal. Just be sure to square up the cam on the bottom of the barrel with the recoil-spring guide rod, and everything goes together just fine. The slide stop is protected but still easily activated. The magazine release is reversible. The fairly long dust cover allows a five-groove Picatinny rail. There is enough texture on the grip to allow a decent purchase without overly abrading the hand. Unlike many newer polymer-framed pistols, there is no arrangement for altering the size of the grip to your hand. One size fits all here.

The ergonomics of this pistol reminded us a bit of a 1911. Grip angle is almost exactly the same on the front strap, though the rear is slightly curved. Front-to-back length for the grip on our sample was about 2.10 inch at its widest point. Checking one of our 1911s at the depressed grip safety, we measured it to be right around 2.06 inch. We measured the thickness of the Ruger-57 to be about 0.15 inch less than the 1911. Ruger managed to keep things this compact while engineering the pistol to accept a magazine that is almost 0.30 inch longer than a 1911 magazine. The 57’s magazine holds 20 rounds of 5.7×28 in a shell that reminds of us more of an AR magazine than a standard pistol. It is a double-stack affair where new rounds can be loaded by just snapping down through the middle instead of having to be slid under feed lips. The magazines also have a wide basepad that mates up with a slightly scalloped grip frame, allowing a great grip for ripping out a stuck mag. Two mags ship with the pistol and more are available from Ruger.

Our Team Said: Reliability was 100% throughout our testing, and delivered energy was substantial for such a small cartridge. Muzzle blast was very noticeable on all three of our test pistols, but, subjectively, we agreed that the Ruger had the least muzzle flash of the three. We liked the controls and how easily they could be reached. As with the other two pistols, recoil was minimal. We like that the 57 comes drilled and tapped for a red-dot base.