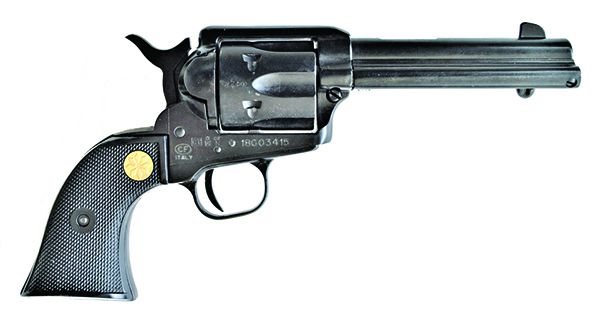 When we first looked at Tradition’s 22 revolvers, we discovered the previous 22 single-action was discontinued in favor of the version illustrated. It should be noted that the Italian gun makers often offer widely differing variations on the same basic revolver. A centerfire single-action revolver with a brass frame for $229 at a chain store and a beautifully finished single action for $499 from Cimarron are common offerings manufactured in the same factory to the importers’ specifications. In this case Traditions, looked to Chiappa for a single-action 22 price leader. While encased in a Traditions box and packaging, the piece is a Chiappa-made revolver. However, there are significant differences between this revolver and the 10-shot Chiappa 1873. First, and most obvious, the Rawhide Rancher is a six-shot 22. The action feels different, as it must, to rotate the cylinder proportionately in a wider arc, but there are other differences as well. The index is more positive. When placing the piece on half cock, we saw the cylinder move and index properly, and there was no problem locking the hammer into half cock. Whether we got a bad ten-shooter or perhaps all ten-shooters have the half cock problem, we cannot say for certain, but there is a good chance it is the latter. The Traditions revolver, however, has a major change that we applaud. This is a transfer-bar ignition revolver added to the original design, and it certainly works. The hammer cannot touch the firing pin until cocked and the trigger pressed. In addition to having the safety, the Traditions revolver is a much-better-handling revolver, mechanically, then the Chiappa 1873. Another feature we really like on such an inexpensive revolver is a hammer-spring tensioner. We experimented with the device, and it works. We did not use it extensively during the test, leaving the trigger at the factory setting.

During the firing test, the Traditions Rawhide Rancher performed similarly to the other revolvers. The action is smooth, and in firing offhand, the Traditions revolver exhibited little to no muzzle flip. The balance is much closer to the traditional SAA revolver than the small revolvers. Accuracy is not impressive, but it was reasonable for the type of revolver. The Chiappa-made Traditions revolver still fired low, which we could easily regulate, but was dead on for windage, which we could not have fixed easily. We rated the Rawhide Rancher down a half grade for accuracy. Just the same, we find it to be a useful revolver well suited to plinking.

Our Team Said: There was some debate concerning which handgun should be the Best Buy, but we gave that title to the Heritage revolver based on its modest cost and good performance. But the Traditions Rawhide Rancher is worth the money.