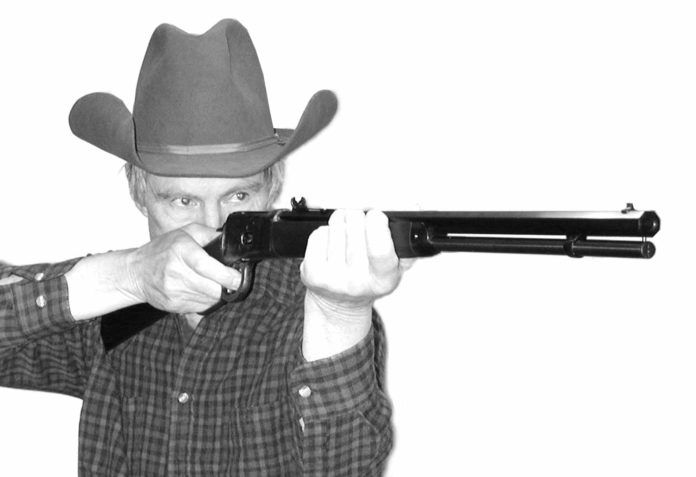 THINKING IT WOULD BE fun to get involved in Cowboy Action Shooting, and maybe do a little hunting with lever guns, I started on a quest for the appropriate hardware. For me, the commonly available calibers were too boring. However, unlike military bolt guns, lever guns chambered in uncommon calibers were expensive. The calibers that intrigued me most, like .38-55, .25-35, .32-40 and .38-40, werent available in new-production rifles in the early-to-mid 90s, and original antiques in good condition were priced out of my reach.

All was not lost, however, as the local pawnshops were literally full of Model 94 Winchester carbines in .30- 30 and .32 Winchester Special. Marlin 1894s were easy to be had in .44 Magnum, and the prices of most specimens were reasonable enough that I decided to look into having one rebarreled to a caliber more suited to my tastes. My goal was to end up with a like-new rifle in an interesting caliber for much less than the price of an original Winchester or Marlin.

On a Quest Now, my task was to find a suitable gun, a qualified gunsmith and a rough idea of what I wanted the gun to look like when it was finished. When I started thinking about the project, I scooped up every book I could find about lever guns. I ran across a copy of Winchester 94: Americas Rifle by Sam Fadala, and things fell into place. Fadalas work focuses mainly on loading for and hunting with the 94 Winchester in .30-30. In one chapter, he talks of having a custom rifle built on the 94 action – The Storey Conversion, built by Dale Storey (DGS, Inc., 404 N. Jackson, Casper, WY 82601).

My first Storey Conversion started as a .32 Winchester Special carbine built in 1948. I traded a Savage pump .30-30 and $100 cash for it. Since I had about $25 in the Savage, the basis for my first conversion cost $125. After I had acquired the rifle, I got in touch with Dale for pricing. He sent me a price sheet to use as a guide and said to write a letter telling him what I wanted so he could work up an exact quote. In order to stay within my budget, I ordered a round barrel, because the octagon barrel I wanted would have cost nearly double the price of the round one. My wifes grandfather happened to have a rifle-style forend and a shorty front sight ramp that he sold me for $10. I could have used the original buttstock, but I wanted one with a larger buttplate.

My search for a replacement stock led me to Precision Gun Works, 110 Sierra Road Kerrville, TX 78028-7129. PGW makes several styles and grades of stocks and forearms for lever guns, and theyre available either semi-fitted or custom-fitted to your gun. Since I had the forearm, I ordered a semi-fitted buttstock with an original Winchester checkered steel shotgun buttplate fitted by the craftsmen at PGW for $115. Dale said he would custom-fit the stock and forend to the rifle for a fraction of what it would cost to have him make a stock from a blank. Dale installed a 24-inch tapered round barrel and chambered it for .38-55. He fitted the forearm that I supplied as well as the buttstock from PGW. He installed my front ramp and added a gold bead front blade and a Lyman tang sight. Dale then polished and blued the metal, but left the wood unfinished, as I wanted to do the finish sanding and apply the hand-rubbed oil in order to save a little money. The total bill from Dale was $658. This in- cluded the new Douglas premium barrel, all the labor, and the parts required to complete the work.

The total cost of the project was $973, including the following: The rifle @ $125, the forearm and sight ramp @ $10, the buttstock from PGW @ $115, Lyman tang sight @ $65, and the bill for Dales work @$658. Ill admit, $973 is a chunk of change, but an original 94 Winchester in excellent condition would be double that. The .38-55 shoots as good as it looks. On its first outing, it produced a three-shot group just over a half-inch at 50 yards. I moved the target to 100 yards and proceeded to shoot a five-shot group measuring 1.5 inches. With accuracy like that, the price was a bargain. My plans for this rifle include some hunting and long-range side matches at cowboy shooting events. The Marlin Cowboy Rifle My cowboy competition rifle started as an 1894 Marlin Sporter .44 Magnum rifle built in 1973. Found in a pawnshop and purchased for $215, the Marlin was a neat rifle in its original condition. It had a 22- inch barrel, a half magazine and a curved hard rubber buttplate. With full-house .44 Magnum loads, however, it was a bit hard on the shoulder, and it wouldnt feed .44 Specials through the magazine. Since the overall length and head diameter of the .38-40 cartridge is nearly the same as the .44 Magnum, and since the action seemed to feed .38-40 dummy rounds just fine, the Marlin Sporter was destined to become the companion rifle to my pair of .38-40 single action revolvers. I wanted this rifle to be suitable for cowboy shooting, so it needed a full-length magazine. I wanted an octagon barrel, so I would need a new forearm and cap to fit it.

The Gun Parts Corporation, 226 Williams Lane, West Hurley, NY 12491, had everything I needed. Marlin had produced an octagon-barreled version of the 1894 in 1973, and Gun Parts had a supply of replacement forearms. I shipped the rifle and the parts off to Dale and he put together another masterpiece. It has a 24-inch tapered octagon barrel with a Marble front blade and semi-buckhorn rear sight. Dale then hand-polished the barrel before applying the blue metal finish. His bill for this one was $680. Douglas premium octagon barrels cost more, and are more expensive to have installed and finished. The total cost of this project was $940. The rifle @ $215, magazine tube, forearm, and cap @ $45; and the gunsmithing @ $680. This rifle is capable of 1.5 inch or better groups at 50 yards.

Storey Conversion No. 2 started as a 1938-production .30-30 carbine. This one, was $75 – my kind of bargain! The buttstock was broken, that would be replaced anyway, and the right side of the receiver had some rust pitting. Digging through a box of buttplates at a gun show, I found one like I had on my .38-55. The price was $5, so I snapped it up. I sent the buttplate to PGW along with my order for a new, semi-fitted buttstock and forearm.

The bill for standard grade wood and fitting the buttplate was $114. Dale put together a quote for this rifle, which has a 26-inch tapered octagon barrel with integrally milled front sight ramp and sling eye. Again, Dale fitted the wood and left it for me to finish. It has a gold bead front blade and a Marble tang sight adjustable for windage and elevation. The price for the sight was $125, and its worth every penny. Since the receiver was rust pitted, I opted for a non-glare, bead- blasted blue finish on the metal. The rifle is very accurate. I shot a ragged 3/8-inch, one-hole group at 50 yards and about a 1.25-inch group at 100 yards. The total cost of this rifle was $1,314. The rifle @$75, the buttplate @$5, the tang sight @$125, and the bill for Dales work was $995.

Storey Conversion No. 3 Intended for hunting deer-sized game, this rifle started as a 1950s-production .30- 30 carbine, purchased at a pawnshop for $210. Again, looking for an uncommon caliber to chamber it for, I settled on 7- 30 Waters. I know its not an old one, but based on its performance, its a good one. It has a flat trajectory and can shoot out to 200 yards with no problem. I purchased a reproduction hard-rubber buttplate for $15 and sent it to PGW for fitting.

They charged me $130 for the wood and fitting the buttplate. Dale in- stalled a Douglas premium tapered round barrel fitted with a barrel-band sling swivel base, a Williams shorty front ramp and a gold-bead front sight. A Lyman receiver sight is mounted on the side of the action. Again, Dale fitted and shaped the wood and left it for me to finish. To go with the barrel band front swivel, Dale inletted a Talley two-screw swivel stud into the buttstock. Just as he did for my other rifles, Dale made the magazine button, modified the tube and supplied the forearm tip. And like its predecessors, Conversion No. 3 now sports a hand-rubbed oil finish.

.32-40: Uncalled-for Caliber?
About three years ago, I had asked Dale about chambering one of my projects in .32-40 Winchester. He said I would have to pay for the .32-40 chamber reamer since he didnt have one on hand. In most cases, Dale will split the cost of a reamer with a cus- tomer if he believes theres a calling for that caliber. However, he didnt think the .32-40 reamer would see much (if any) use, so I would have to bear the entire cost. The cost would be around $120. I put the .32-40 idea on the back burner until I found Brian Sipe, owner and operator of The Mon- tana Rifleman, 2593A Highway 2 East, Kalispell, MT 59901.

He makes custom rifle barrels and performs bar- rel and action work. His price to re-barrel a Model 94 was $375 for a round barrel or $575 for an octagon one. This included refitting the forearm and rebluing the entire gun. Sight dovetails were an extra $30 each. He had a .32-40 reamer on hand, so I decided to give him a try. Here are the details of the .32-40 rifle: It started as a .32 Winchester Special carbine built in 1941. It cost me $275. The Montana Rifleman fitted it with a 26-inch round barrel, a PGW forearm, and a forearm cap and magazine tube that I supplied. The magazine is not a button type, but ends just ahead of the forearm cap. I had a Lyman front globe sight installed, along with a tang sight. The .32-40 is a work-in-progress. So far, the cost of this rifle is around $800. Once completed, the total will be around $1000.

Timing
How long does it take to complete these projects? The range is nine months to a year. You just cant rush this type of work, and the finished product has always been worth the wait.