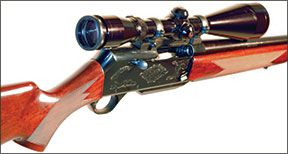 We had the loan of a Browning Safari BAR semiauto rifle in 338 Win. Mag. and had a chance to try it out in very cold weather here in Idaho. The Browning BAR sporting rifle has been in production since 1967. Originally made for Browning by FN in Belgium, they are now made in Belgium, but – as our test rifle indicated – are assembled in Portugal. Our first inspection of the big rifle showed it to be well made, with great attention to detail, excellent bluing on well-polished and flat metal, and with attractive, though pseudo, engraving on the sides of the action. The wood was decent, though certainly not fancy, most likely chosen for strength in some areas rather than eye-stopping beauty that might show cracks from slight abuse. The glossy stock finish was impeccable. The stock design was classic and hand-filling in its dimensions without being club-like.

The checkering was unbelievable, quite fine and nearly perfectly done. The forend was wrapped with enough excellent checkering to cover six rifles, and the pistol grip also had an abundant amount of it on each side. If we owned this rifle, wed rub some linseed oil into the checkering and brush it out with an old toothbrush, which is one of the best ways to preserve what looks like bare wood on the checkered areas. The fine checkering served us well in the cold to help get a good hold on the rifle.

The test Browning was fitted with a huge Nitrex 3-10X variable scope in Leupold rings. We were not at all sure that big scope was appropriate here. After all, the game one hunts with such a rifle is large enough that it can be easily seen at the limit of the rifles range with even a 3X scope. We thought this big optic only added weight to the already hefty rifle. We really didnt care for the incredible weight of this package. With the big scope, the rifle tipped our scales at 9.9 pounds. Weve seen 458s that weigh lots less than that. The only way to reduce the weight, short of major surgery, would be to put on a lighter scope, but youd still have a weighty 338. The Nitrex scope weighed 1.3 pounds. With the scope off the rifle, it felt much better balanced, and a good deal more lively, though it still weighed 8.6 pounds. A more suitable scope would bring the weight to about nine pounds. Is that too much? Maybe not, but would you be happy to pack that weight on a hunt?

Yet some hunters will like all that weight to help cut recoil, in preference to the BOSS system, which is a muzzle-brake option on this rifle that reduces kick but adds to the already significant blast. From our bench rest on a cold day, we didnt find the recoil to be unpleasant. The recoil pad was mighty stiff and didnt do much to cut the kick. A Winchester M70 in 338 WM weighs 8.6 pounds scoped and loaded.

Cleaning the Brownings barrel has to be done from the muzzle. Care must be taken to ensure no damage is done to the crown during the life of the rifle. Detail stripping is not recommended for the amateur. We did none of it, the rifle being clean and ready to shoot as we got it, though we replaced the scope rings with higher ones to prevent the scope touching the barrel.

The magazine held three rounds, and you could load a fourth if desired. The magazine box came right out of the floorplate for easy loading. Just grab it and pull. And of course you could carry a spare loaded magazine if you expected to get into a shoot-out with the elk. We tried the BAR with two types of ammo, Remington 250-grain Core Lokt PSP, and Hornady Heavy Mag 225-grain SP. The rifle much preferred the Hornady, giving us groups around 1.5 inches for three shots at 100 yards. The Remington ammo went into groups that averaged just over 2.5 inches.

The trigger was creepy and, besides the weight, was one of the few things we found about the rifle we didnt much like, though we could live with it. Were not too sure we liked the control locations on the rifle. The lever to drop the bolt was far up the right side of the action, not a natural place to look for it. The safety was a shotgun-style crossbolt behind the trigger, again not really handy for riflemen, but shotgunners would be right at home.

The big rifle handled all our ammo perfectly, even in the cold weather. Feeding and firing were perfect. Ejection was positive, the empties going somewhat forward and away from us. They were not thrown so far as to be lost, though, which we liked. We thought the accuracy was just fine, all youd ever need with such a big rifle, but the choice of ammo seemed to be critical in that regard.

Our Team Said: We really could not find anything else wrong with the Browning, and if you can live with the glossy finish, the creepy trigger and the hefty weight, it should serve you long and well.