The Sturmgewehr 44, commonly abbreviated as the StG44, was one of the earliest examples of what became known as assault rifles. First introduced by the Germans on the Eastern Front in 1944, the StG44 was a gas-operated select-fire (semi- and full-auto) rifle with a pistol grip and box magazine. The original rifle’s intermediate 7.92x33mm Kurz cartridge (123-grain spitzer at 2250 fps for 1391 foot-pounds of energy) and in-line design helped mitigate recoil during automatic fire. Reputed to work well in the cold and be surprisingly accurate, the StG44 possessed many of the characteristics now considered standard features of modern assault rifles. A collector today should expect to pay tens of thousands of dollars to add a historical StG44 to his or her collection.

The German Sport Guns GSG StG44 in 22 LR is a more modern blowback rimfire replica of the StG44 assault rifle. It is also much more reasonably priced, with a MSRP of $529 and a street price of $330 at CDNN Sports (CDNNSports.com). It comes with one 25-round magazine, and additional magazines are easy to find around $30 apiece. The rifle makes an immediate great impression, as our example came in a sturdy replica wooden crate with a modified Waffenamt stamp and American Tactical StG44 burnt onto the lid.

Opening the latches of the box revealed the StG44 broken down into two sections, the barreled receiver and a wooden buttstock. It was simple enough to assemble by connecting the two pieces and inserting the included spring-loaded pin. Care is advised when removing the rifle from the crate to prevent the upper and lower receivers from opening and spilling the parts from the action. If this does happen (and it will happen eventually), it is very easy to re-assemble the action using the detailed and illustrated instructions included in the excellent manual.

The rifle was accurately sized at 37.3 inches long with a 16.3-inch barrel. While heavy at 9.15 pounds, this is still a full pound lighter than an original StG44 and felt well balanced between the hands. Fit and finish were historically accurate, which in this case means very basic, with lots of metal stampings and simply finished wood. The metal finishing was very evenly applied and has held up well to heavy usage. Considering the manufacturing difficulties encountered by the Third Reich at the end of WWII, the GSG edition of the gun would probably qualify as a very-high-quality example. The Schmeisser-marked receiver appeared to be stamped out of a zinc-alloy material. We took the opportunity to show this rifle to a senior gunsmith at an internationally recognized gun shop. He expressed no concerns with the material used in the receiver. In fact, we thought that the material provided an accurate look and feel to the piece. While plastic is used for some parts with little concern, our testers were not fond of the plastic cocking handle. However, it has held up well under heavy usage.

The buttstock and grooved pistol-grip panels are made from simple, straight-grained wood with a basic, but well applied, finish. In fact, the only part of the rifle that showed any wear at all over the course of our shooting were the pistol-grip panels, which showed some slight wear. The gunsmith noted that there was nothing in the GSG design that would concern him in the unlikely event that a repair was required. Breakdown is just as simple as assembly and is well described in the included manual. Since this firearm has a split receiver, this is an easy rimfire to clean from the breech. Because improper cleaning damages many rimfires, this is a potential longevity advantage for the GSG and should certainly help with long-term reliability.

Every tester was excited to try out the GSG StG44, and the rifle created a stir on the range every time we took it out. Many shooters of the younger generation know the StG44 well from modern video games. Shooting the StG44 was an enjoyable experience for most shooters. There was almost no recoil due to the weight. Some of the shooters found the weight made the rifle more tiring to shoot for long periods from a standing position. The sights consisted of a pyramid front post and a V-notch rear, with spacing geared more toward precision than speed. The sights are black and were a little difficult to see in low light or against a black background. They were very clear and easy to use in an outdoor setting. The sights are easy to adjust, using a button for elevation and a knurled knob for windage, but our example tended to shoot much lower than marked. Research indicated that while the sights are marked for historical accuracy, they are actually designed to work at rimfire distances. Just drop the last zero and it will get you close to the target range.

The two-stage trigger had a long, light take up with a crisp release and moderate overtravel. While it was one of the heavier triggers at slightly more than 8 pounds, shooters noted the trigger was very smooth and easy to use. The rifle was an accurate plinker. One shooter noted that it was so easy to hit the target that it was almost boring. Another shooter expressed surprise at how similar the GSG StG44 was to gameplay of the StG44 in his favorite video game. The 25-round magazine loaded easily and inserted easily. The magazine-release button was on the left side of the action, very large, well checkered and very positive in its usage, but the magazine did not drop free. None of the testers considered this a problem because the magazine release button was so large that even those with small hands could easily remove the magazine while pressing the release. The bolt was held open when the magazine went empty. While some have reported problems with the bolt hold open, our example exhibited no issues.

The left-side two-position safety was large and sturdy with Fire marked in red at the up position. All the controls were easy to use for testers of all shapes and sizes. We found the GSG StG44 very easy to use in cold weather with gloves due to the enlarged trigger guard, large magazine release and safety, and easy-to-grasp cocking handle.

In formal accuracy testing, the StG44 performed well with the Aguila 40-grain roundnose ammunition with 0.9-inch average groups and Winchester 36-grain hollowpoints with 1.0-inch average groups. This rifle was one of only two rifles that did not perform well with the 40-grain Federal roundnose load, averaging the second worse group of 1.3 inches. Again, this kind of ammunition preference is normal behavior for a 22 LR semi-automatic firearm. We shot more than 500 rounds through the rifle in both hot and cold conditions. The GSG StG44 did not experience a single failure to function of any kind. This is remarkable performance for a semi-automatic rimfire using bulk ammunition.

Our Team Said: We appreciated the historical accuracy of the GSG StG44 replica. The rifle was a surprise hit with the younger video gamers in the group and the StG44 turned heads wherever we went. We found it to be accurate and unfailingly reliable. Though it was a little heavy, everyone found it easy to use and a lot of fun to shoot. 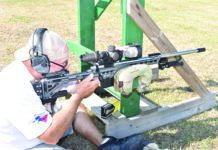