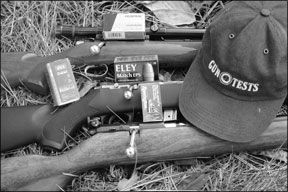 Bolt-action 22 rifles are among the most basic and useful of all firearms. They are fine trainers and excellent tools for a variety of uses limited only by the imagination of the owner. Weve seen em used for just about anything, and about the only constant is that decent 22 bolt rifles generally have long and useful lives. In this comparison we look at two older 22s by Winchester and Marlin, and a new Marlin as well.

The new Marlin had a black synthetic stock and stainless barrel and action. All the rifles were adult size, with good weight and reasonable dimensions. We tested them with CCI Velocitor HP, Federal Classic round-nose, Eley Match EPS, and Remington Yellow Jacket HPs.

Bear in mind the Winchester Model 69A and Marlin 80-DL are not modern rifles. If you choose to buy one, be sure you get it all, and that it functions when you buy it. Spare parts are going to be hard to find. Gunsmiths might refuse to work on them. If you need a simple rifle youll find many modern ones cheaper, easier to find, and far less risky over the long haul. We dont condemn the older rifles, but the buyer must be aware there are plenty of choices in 22 bolt rifles today. But if you happen to come across one of the old blued-steel and walnut 22 bolt rifles, they might please you as no modern rifle can. Heres what we found.

The street price of this little rifle is about $250, averaging three sources. As such, its a better bargain than the Winchester, and much easier found than the old Marlin 80 DL. The Marlins black synthetic stock had excellent checkering, and the stainless metal had a finish that would shame many costlier rifles. The trigger guard was synthetic, and seemed to be very sturdy. The older Marlin also had a plastic guard, but not as nice as this new one. The only thing we didnt like about this rifles looks was that the magazine hung down like an afterthought. We found it took two hands to remove the magazine, which we considered to be a safety feature.

The next thing that caught our eye was the bright-orange front-sight insert. This, we found, stood out well against nearly any background. We wished for a good aperture rear sight to use with it, but one is not offered. Instead the rear sight was the old “buckhorn” type with stepped wedge for elevation adjustments

against the spring of the sight leaf itself. A button on the wedge made this an easy process. Windage was by drifting either the rear or front elements.

The stock had a molded-in buttplate that was integral with the stock. This gave a clean, uncluttered look that we liked. In fact, the overall look and feel of this rifle was that of a full-size big-game rifle. The trigger pull was stiff but clean on the break. The Marlin had clearly marked Safe and Fire positions to the rocking lever at the right rear corner of the action. Bolt removal was by pressing the trigger, a feature shared by all three rifles. Extraction was by two opposing sprung fingers, again as in all three rifles. This Marlin had the biggest extractors.

All three rifles magazines required some dexterity to load. This one held seven rounds. The magazine fit solidly and securely into the rifle. The rifle fed all rounds well and ejected them quite forcefully, a quality lacking in the other two rifles.

We tried the rifle with its iron sights at 50 yards, and groups were not as good as we got with the other two rifles, which had an aperture sight and a scope to help them. To make the test fair we installed a 12X Leupold in tip-off rings, using the grooves in the Marlins receiver. This helped things, but didnt make this into a tackdriver by any means. Best groups were with Federal Classic, at 0.9 inch on average. There were no failures to feed, fire, or eject.

As with most older rifles this one had a visible history of having been slightly altered. The stock, which was attractive walnut with pleasant and interesting grain, had been refinished in best-quality oil. The near-pristine original bluing was marred on the barrel by some slight and old rust-spotting, which we were informed was the result of storage in a humid environment for a time during which the rifle was not inspected. The rifle had been fitted with a Lyman

aperture sight of the same vintage as the rifle. The notch in the barrel for the original sight was filled with a suitable metal wedge. The Lyman aperture sight had positive click adjustments for elevation and windage, with adjustable indexes. This means you could set the sight for a center strike at, say, 50 yards, slide the windage and elevation scales to align with the zero marks on the sight, lock them in place, and always be able to return to zero as future adjustments are made for windage or different types of ammo. This was an excellent setup.

The front sight was a round bead on top of a base dovetailed into the front ramp. The front sight could be easily changed by means of two locking screws if you had a different one with, say, a flat top. There was provision for a sight cover or dust shield, but none came with the rifle.

The somewhat clunky-shaped stock had been originally fitted with sling swivels, but these had been removed. We thought the plastic trigger guard was ugly, shiny, and inappropriate for this rifle. In front of the trigger guard was a plate of steel that provided a slot for the magazine and a bearing surface for the takedown bolt. One of the screws that secured to the rifle was stripped, so the front of the plate hung down. All of this did nothing for the looks of the rifle, but did not affect its function at all. The magazine was rather large, and held eight rounds. Its insertion and removal were somewhat vague. In practice it worked very well.

The rather crude safety lever was in the same place as on the new Marlin but worked exactly backwards. There were small, partially concealed letters that were hard to read that told whether the safety was On or Off. They may have been filled with paint at some time. Removing the bolt required first removing the slide from the Lyman rear sight. Then the trigger had to be pulled to get the bolt out of the rifle. The bolts design was very similar to that

of the new Marlin. The trigger was a chrome-plated affair that had lots of creep in two stages and then broke crisply. Despite that, this rifle gave accuracy with its aperture sight about equal to the new Marlin with its 12X scope. Clearly a trigger job was needed here, and it was easy to see why its owner had refinished it.

Once again we had a modified old rifle on our hands, though this one appeared to be something of a thoroughbred. The walnut stock had been refinished in oil, and some extensive checkering had been done to it. The checkering wrapped around the forend, and covered the pistol-grip area extensively. The formerly chrome-plated trigger guard that was originally stuck on as an afterthought had been polished, blued, and inletted into the stock. We thought the effort could have been made to sink the magazine-well plate into the stock also, but this had not been done. The rifle was fitted with a period Weaver B4 3/4-inch-diameter scope with uncovered adjustments. The rifle retained its original iron sights, consisting of a leaf-type rear with small U-notch, and a bead front dovetailed into the barrel. The receiver was also drilled and tapped for an aperture sight, which we did not use.

The original bluing was still excellent, and the markings on the barrel were perfectly legible. The five-shot magazine released somewhat reluctantly via a button in the left side of the stock. This was an eyesore, we thought, though part of the original design. The short bolt – white metal like on the other two rifles – came out via pressing the trigger. It had a design very similar to the others but was a good deal shorter. The bolt handle was somewhat loose, which we were told is characteristic of these older Winchester 69s. The safety lever was loose, but did move in the conventional direction for safe and fire. It was again at the right-rear of the action. The word Fire was revealed with the lever forward.

We later discovered that the owner, who had done the checkering, had also altered the stock shape here and there, so this rifle didnt look like your average Model 69A Winchester. It looked a lot better than most. The rifle had the original hard-rubber Winchester buttplate, with checkering and the Winchester Repeating Arms logo in the center. And it had sling-swivel studs, too.

On the range we found the Winchester gave the best accuracy. It shot everything well, averaging under 1-inch groups with three of the four ammos. No wonder its owner had made it look so much better. We liked the simple sight picture of relatively fine crosshairs, easily seen. The rifle had quite a few failures to eject the spent case fully. Were not sure why, but when we worked the bolt fast it worked all the time. The trigger pull was the best of the test as well, but again it had been “breathed on” by its owner.