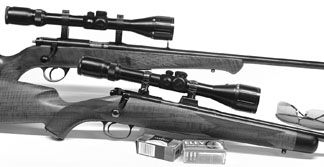 A well-made rimfire rifle will make other shooters at the range stop, stare, and sometimes drool. Some people might buy them simply to admire their beauty or impress onlookers, but we believe that no matter how good a gun looks, if it doesn’t perform, it isn’t worth our consideration.

We recently tested two models that fit, or perhaps define, the high-end rimfire sporter market: The Anschutz 1710 D KL Monte Carlo No. 220.2030, $1413; and the $1877 Kimber SuperAmerica. When other shooters saw these rifles at the range, they usually stopped and asked, “What kind of rifles are thooose!”

To find out if these guns shot as well as they looked, we enlisted a panel of testers that included seven teenagers (four male and three female) and three adult males. The teenagers’ experience varied from first-time shooter to four years of hunting and target shooting. The adult males all had over 25 years of shooting experience of all kinds. One of the adults commented that these rifles were “too good for teenagers to shoot.”

The Anschutz came with a height-adjustable folding-leaf rear sight and hooded pearl post sight, also height adjustable. The receiver was dovetailed, and drilled and tapped. We used see-through scope mounts, which gave us the advantage of being able to use either the iron sights or the scope. Iron sights are not an option on the Kimbers. We chose a Shepherd Enterprises 3-10×40 riflescope (No. 310-P22LR, $599 from www.shepherdscopes.com/) to top both of our test rifles.

At the range, we fired two rounds of ammo through the guns: Federal Champion 40-grain No. 510 lead solids; Remington Thunderbolt 40-grain No. TB-22 lead solids; and Eley Tenex Ultimate EPS 40-grain lead solids. To collect accuracy data, we fired three-shot groups from a rest at 100 yards. To capture velocity data, we used an Oehler 35P chronograph with the first skyscreen 10 feet from the muzzle.

The barrel and receiver of this gun were matte-blued steel, which most of our testers with a hunting background preferred. The free-floated barrel on the Anschutz is more than 0.10 inches greater in diameter than the Kimber’s, and its length exceeds the Kimber’s by about 1 inch, but, surprisingly, it consistently produced bullet velocities 40 fps slower than the Kimber. However, this extra metalwork contributes to the Anschutz weighing 13 ounces more than the Kimber. Anschutz also makes a heavy-barrel version with a classic straight stock (1710 D HB) that is heavier still. In our testing, the smaller teenagers preferred the lighter Kimber.

The Anschutz’s wing safety is located at the rear of the bolt. We had our panel of testers shoulder the rifle and put the safety on and off. No one had a problem putting the safety on by pushing down on it, but everyone found it difficult to take the safety off. No one’s thumb was strong enough to take the safety off while keeping their fingers in the trigger guard, unless they used their support (left) hand to take off the safety. When the safety is on, the bolt cannot be opened, unlike the Kimber’s. If game were in earshot of these rifles, most hunters would choose to operate the safety slowly, using both their thumb and finger to reduce the noticeable click heard from both of these rifles when the safety is taken off. The majority of our panel preferred the safety on the Kimber, and we think hunters would also prefer the Kimber, because they need to use the safety more often than target shooters.

The Anschutz has a light single-stage trigger with slight take up. The trigger has grooves on it that peak in the center. The panelists were split concerning trigger preference.

The stock is a beautiful light colored European walnut with vertical stripes in the grain. The pores of the wood have been completely filled in. The diamond-cut checkering is impressive. The Schnabel forend is narrower than the Kimber’s. Accordingly, panelists with smaller hands tended to prefer the forend grip of the Anschutz. The rollover Monte Carlo cheekpiece was preferred by a small majority of our right-handed testers, but all of the lefties found it uncomfortable. Anschutz does manufacturer some left-hand rifles, but not in the 1700 series.

The buttplate was hard plastic with horizontal cuts. It was nicely fitted and had a white spacer, as did the rosewood pistol grip cap. We thought the Kimber’s rubber recoil pad provided a better mount to the shoulder for most of our panel.

All of the blued steel on this rifle is highly polished, which some of our panelists, especially the females, preferred, but in a hunting situation it could produce a glare that a game animal might spot.

The Kimber’s bolt knob is smaller than the Anschutz’s (the majority of panelists preferred the larger bolt knob), and only swept back about 10 degrees, but the throw was over 90 degrees. Our team preferred the Anschutz bolt’s operation.

The Kimber stock is a beautiful AAA dark walnut. About 20 percent of the pores in the hand-rubbed oil finish had not been filled in. Kimber also offers other versions of the rifle in AA and A walnut grades and a grey-laminated stock with varying degrees of checkering at lower prices. The Kimber’s rubber recoil pad provides a firm shoulder weld.

The gun also comes with sling swivel studs, which hunters will appreciate, and a steel grip cap, which limits stock dings to some extent.

The five-round magazine fits flush into the rifle, and the release lever is also nearly flush. To release the magazine, the shooter pulls the lever toward him, opposite of the Anschutz. About half of our panelists had problems with the magazine not fully seating. They would have the bolt open and push in a loaded magazine. They would hear a click and the magazine looked flush, but when the bolt was pushed forward, the magazine would come out slightly and the bolt would not catch the second round. Sometimes this would happen twice in a row. However, once the shooter got used to pushing in on the rear of the magazine (a second click could be heard) they never had any more problems.

However, we noticed when we were taking a second look at the magazine seating issue that when the Federal ammunition was fed into the chamber and we tried to extract it without firing, it would not come out without the aid of a knife blade. There were no problems with the other two brands tested. The Anschutz did not have this quirk.

Two items in particular contributed to the Kimber’s solid performance at the range: Its free-floated, lapped, match-grade barrel with tapered match-grade chamber and target crown is press fit and pinned in alignment with the bore. And its trigger was wider than the Anschutz’s and completely smooth. The trigger pull was a hair heavier than the Anschutz’s, but there was no take up. About a third of our shooters preferred it to the Anschutz trigger.

Anschutz Model 1710 D KL Monte Carlo No. 220.2030 .22 LR, $1413. Our Pick. This rifle lived up to Anschutz’s outstanding reputation for quality and accuracy. If you are a right-handed shooter or want iron sights, definitely buy the Anschutz. Lefties should pass on this version of the 1710, however, because of the rollover cheekpiece.

Kimber 22 SuperAmerica .22 LR, $1877. Buy It. Once you get used to fully seating the magazine, this rifle functioned as good as it looked and its accuracy equaled the Anschutz. Left-handed shooters could consider the classic-stock version of the SuperAmerica, but neither rifle is a good choice for southpaws, in our estimation.

Kimber’s lower-grade wood rifles cost one-half to two-thirds the cost of the model we tested, and some of our panelists thought the lower priced wood looked better. We would take a close look at the lower-quality AA or A wood models, because you might find one that looks better to you at half the cost. If that were the case, then consider the SuperAmerica a Best Buy.