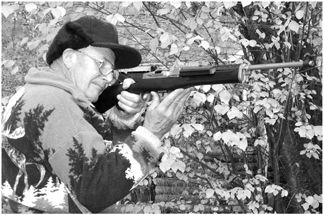 Many a rancher, farmer, and outdoorsman has a perceived need for a lightweight, handy carbine that uses the tiny .223 cartridge. The need is apparently to be able to sling repeated tiny bullets at a varmint or small-game animal without a lot of fuss or muss. The rifle has to be simple, without a lot of frills. While the simplest and perhaps most useful setup is with aperture sights, some think it’s necessary or useful to mount a scope on such a rifle. The idea of shooting small game or pests with such a rifle means the rifle should have adequate accuracy for the task at hand. But even more important than pinpoint accuracy, we thought, is a package that is shootable, with a good trigger, and that can make up for a little lack of accuracy through shooter friendliness and ease of handling.

Some shooters, perhaps most, want such a rifle for self defense, and while it is far from ideal for that purpose, it serves better than nothing at all. (We realize the U.S. military uses the cartridge, but also realize soldiers who can get a similar rifle that uses a larger cartridge always opt for the bigger one.) In self-defense use, pinpoint accuracy isn’t necessary, but reliability is paramount. In this report we try to keep in mind these perhaps dubious or questionable uses for the .223 and its semiautos.

One of the solutions to this firearm problem is the Ruger Mini-14 Ranch Rifle ($809), so we got one of those. Rumor has it that the very latest Ruger is a more accurate rifle than earlier versions, so we got the loan of an earlier example. We also gathered an AR-15-type rifle by Olympic Arms, its Model K3B ($780). The little carbine came set up in a manner that was quite illegal a few years ago, with 30-round magazine, collapsible stock, and flash hider. We set the Ruger against the AR-15, and this is what we found.

[PDFCAP(1)]
Our new Ruger came with a black synthetic stock and stainless metal work. It felt handy, we thought, particularly without a scope mounted. It was a solid and attractive little rifle. We compared it to an [PDFCAP(2)] with wood stock and stainless metal. The obvious difference was the synthetic stock on the new one, which had functional checkering. The older wood stock, of birch, had none. Ruger’s new rifle may be had with an uncheckered wood stock, and the new version has a recoil pad. The action of the newer rifle was more rounded at the back. We could see no advantage to that. A big point was the new rear aperture sight, which was more of a “ghost” ring than the older one. It had protective ears, and was adjustable for windage. The older folding rear sight was not really protected, and was more of a hole in a wall than a ghost ring. The new front sight was better protected too, and mounted a full inch farther out on the barrel, giving that much more sight radius.

The trigger pulls, old and new, were comparable, with the older one being a bit lighter at 5.3 pounds versus 5.8, and with no discernible creep. The new one was a touch creepy. We found the new magazine fit the older rifle, but it was tricky to get it in. However, each rifle ultimately accepted both magazines, though the 20-rounder was non-Ruger. The scope rings from the old one fit perfectly on the new. Workmanship on both old and new were, so far as we could see, identical and excellent.

All the evident attachments and mounts and construction practices on old and new Rugers were the same, so far as we could tell. We preferred the synthetic stock to the wood one, though wood might be more friendly in cold weather. The new Ranch Rifle is available in either blued or stainless steel, and with either a hardwood stock with a flat, rifle-style recoil pad (gone is the curved metal butt plate) and sling swivels, or the synthetic stock we tested. The blued-metal version is about $60 less costly, at $750 suggested retail. Twist rate for the Ruger is given as one turn in nine inches.

We [PDFCAP(3)] with PMC 55-grain FMJ, Wolf (Russian) 55-grain FMJ, Black Hills 62-grain FMJ, with a handloaded 55-grain soft nose, and unofficially with a variety of bullet weights up to 68 grains, looking for some clue to better accuracy. Our initial testing of both Rugers was with the older rifle’s Bushnell 3-9X scope. Accuracy was disappointing with everything. We wondered if a higher-grade scope would make a difference in accuracy, so we mounted our Leupold 36X. Accuracy was just as good — or bad — with either scope mounted. We found no great difference in accuracy between light and heavy bullets in the two Ruger rifles, nor in the Oly when we got to it. Function was perfect, though empties ejected a long distance.

[PDFCAP(4)]
We experienced great delight on opening the box in which this fine little carbine came. We noted with glee the genuine flash hider and the 30-round magazine. The rifle also seemed to have one of those phony collapsible stocks, but this one was sort of loose to the touch. A brief inspection proved it to be a genuine collapsible stock. A touch on the rear lever let the stock collapse to roughly two-thirds of its original length. There were a total of six locking positions you could choose for the butt length. That was enough to make this one mighty handy in tight quarters, and ideal, we thought, for house protection or for the use by shooters with shorter arms. The top carrying handle was fixed to the action, so if you want to scope this particular model you’d have to use one of the many setups for high scopes that work in the top groove of the standard AR-15 handle. A quick-point sight might be ideal.

The rifle had adjustable sights, which were right on the money when we tried them. We’d have liked a bit more downward adjustment, but of course the front sight was adjustable for protrusion, so it would be easy to get more “down” to the sights. The rear had two leaves, a small one for precision and longer range use, and a genuine ghost ring for fastest “combat” use. We liked the sight setup immensely. Two ratcheted wheels provided adjustment.

Most of the rifle, from its matte-black finish to its flash hider, breech cover, shell deflector, pistol grip, bayonet mount (!), and even a forward assist, was mil-spec. There were no compromises for lefties, however. The rifle was set up for right-handers. The safety was easy to use. The trigger was excellent, we thought, clean and light enough at 4.8 pounds. The break was a touch soft, so you never knew when it was going to fire. Some of us have found that to be beneficial to fast shooting, once you are used to such a trigger. Barrel length with the brake/flash hider was about 17 inches, and a touch less minus the brake. We noticed the big ball of flame seen in front of the Ruger with PMC ammo didn’t exist here. The hider hid it. Also, all accessories for AR-15s or M16s would fit just fine, so far as we could tell. There was a sling and a good operator’s manual in the nice olive-green hard gun case, but only one magazine. One odd thing was that the caliber marking was not easy to find. We finally found it on the front of the barrel. It was not on the lower action, nor on the owner’s manual. Even the company website keeps the calibers secret, something we’d like them to change.

Workmanship inside and out was outstanding. We could find nothing at all on which to dun the maker, as far as quality of work went. We were becoming fond of this little rifle, and we had yet to shoot it. We shot with the iron sights, at both 50 and 100 yards, and recorded all our results at 100 yards. The rifle fed and functioned perfectly. We noticed the tendency to cluster some of our test groups into mighty small groups, but as with the older Ruger, there were some “flyers.” The degree of flyers and their occurrence seemed to diminish the more we shot this handy little carbine.

To our surprise, the little K3B with its iron sights more than held its own against the scoped Ruger Ranch Rifle, and we’d expect it to outshine the Ruger if we scoped the Oly. But as with the Ruger, we felt that would probably be a mistake. The whole idea of such a rifle is to be both fast and handy, and also to be there when needed. This holds for self defense and hunting uses. There would be little need to try really serious hunting with this carbine, we felt, because there are better options. So a scope doesn’t make sense for us.

Gun Tests Recommends
• Ruger Mini-14 Ranch Rifle KMINI-14/5P, $809. Buy It. With the new Ruger’s accuracy in the realm of three inches, we wondered at the wisdom of mounting a scope. The rifle had excellent iron sights, and that is how we would use it if we owned it, especially in a self-defense role. But some shooters like a scope because of poor eyesight or small targets. Despite rumors that the new rifle is more accurate than the older one, the only change we noticed is that the older rifle had a tendency to put four (of five) shots into a tiny cluster and one of the five a short distance away. The newer rifle tended to spread all its shots out, though into about the same average group size. We liked the well-protected sights, and the new synthetic, checkered stock. We thought the Ruger was attractive, fully functional, and a viable option for the shooter who wants a semiauto .223, even though it didn’t win our hearts.

• Olympic Arms Model K3B (AR-15), $780. Our Pick. We liked the Oly Arms a whole lot. It was well made, handy, had a decent trigger, had all the good stuff that is once again legal, and we thought it was by far the better self-defense weapon, particularly in light of its collapsing into a smaller unit for use in tight quarters. It is easier to scope the Ruger, but its lack of accuracy makes that a questionable setup, we felt. We thought the Oly was an all-purpose little carbine that could throw a slug quickly with sufficient accuracy, and look good doing it. We got the impression it would last a long time, though Ruger’s Ranch Rifles are surely at least as durable. One odd thing about the Rugers is they fling their empties a long way. The Oly favors the handloader, and puts its empties where they are easily found. Bottom line, we’d choose the Oly Arms K3B over the Ruger, though both were pretty nice rifles. We felt the Oly was more comfortable, better balanced, gave at least as good accuracy, and cost less in the bargain. Street prices might change that, and there are lots of Rugers floating around the second-hand market, so you might find a bargain; but in new rifles, we’d take the Oly over the Ruger any day.

A self-defense note: Ruger now offers the Mini-Thirty (7.62×39) at the same price as the .223 Ranch Rifle, and those who want a Ruger semiauto rifle for self defense are well advised to get the Mini-Thirty, which we hope to wring out in an upcoming test on these pages.