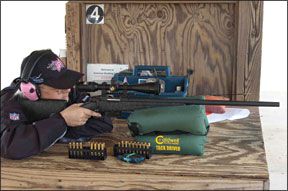 In making the case for the AR-15 platform to serve as a hunting rifle, it was pointed out that its military pedigree does not really set it apart from the other rifles we love carrying into the field. Almost every rifle from musket to semi-automatic was born of military design, so why should the Modern Sporting Rifle be any different? Likewise, were also seeing a growing acceptance of bolt-action hunting rifles with military profiles. Just like the AR-15, if a certain stock configuration and features like removable box magazines work well for snipers and designated marksmen, then they are sure to work efficiently for the hunter, too. Hence the appeal of our test rifle, the $885 Model 527 Varmint Target from CZ-USA chambered for 204 Ruger.

The M527 Varmint Target is also available chambered for 223 Remington, but with 223 being in short supply, we chose the 204 version to make sure we would be able to stock up for our next prairie dog hunt at Rifle Ranch in White Owl, South Dakota [(605) 985-5516). Both the 204 and 223 versions of the CZ-USA 527 Varmint Target rifles carry the same suggested retail price and both models feed from a single-column detachable magazine with a maximum capacity of five rounds.

The stock was a black Kevlar composite with aluminum bedding blocks and a textured finish. It had a steeply cut pistol grip and long forend featuring a pair of sling studs at the front. This offered us a choice for sling attachment but more importantly an extra point at which to connect a bipod should the bipod not supply an auxiliary sling stud of its own. The comb of the stock was high, straight, and quite long, extending far enough forward to require a groove to accommodate pulling out the bolt. The underside of the buttstock was parallel to the comb for much of its length to provide a surface for using a rear bag. The 24-inch-long medium bull barrel (with 1:12 inch twist) was free floated. All steel parts were bead blasted and blued, offering a matte finish.

With so much of the 527 Target Varmints design amenable to shooting from the prone position, we performed all of our 100-yard accuracy tests stretched out on the floor with a bipod up front and a beanie bag supporting the rear. For optics we shopped Brownells.com and purchased a $550 Nikon Monarch 4-16X42SF scope with BDC reticle. We chose this scope for its clarity, range in power and the eye-catching circles found below center as part of the BDC reticle.

The receiver of the 527 arrived cut with an integrated 16M dovetail and a pair of steel rings to match. The rings were quite hardy and indexed so that the top strap of each ring cannot be swapped or reversed. But since we wanted to get our scope up a little higher, we ordered a scope mount from the CZ-USA.com accessory shop. The Weaver adapter synched in with a mating groove so it was virtually non-slip. Using a set of high Warne Maxima rings, we set up our variable power scope so that the adjustment ring easily cleared the bolt handle.

For test ammunition we tried three different bullet weights. All varieties of 204 Ruger ammunition travel quickly, so we thought the pitting of slower but heavier rounds versus lighter and faster would prove to be strictly academic. Nevertheless, we fired Hornadys 24-grain NTX Superformance Varmint rounds, Winchesters 32-grain Ballistic Silvertip ammunition, and Federals 40-grain Nosler Ballistic Tip to see what we could learn. We also planned a trip to the 300-yard range at American Shooting Centers to find out how well we could shoot the CZ 527 at ranges more typical to prairie dogs hunts in the windy wide open spaces of the Dakotas.

We performed a minimal break-in procedure of 45 shots, shoot once and clean ten times, shoot twice and clean ten times, then shoot three and clean five times. Along the way, we were able to sight in the rifle beginning at the 50-yard line. We also learned how to best load the magazine into the rifle – directly upward, beginning with the rearward edge of the magazine against the guide channel located at the front of the trigger guard. The release for the magazine was a vertical tab located on the right-hand side of the magazine well. Reaching blindly beneath the magazine, the middle finger proved to be the most obvious digit for the job. We found this to be awkward not just because we couldnt see the lever but also because the lever offered a fair amount of resistance, and the middle finger is rarely called upon to do this type of work. But a left-handed shooter firing a right-handed 527 would likely delight in this arrangement because the release would be visible and the strength of ones thumb would be more than up to the task.

The single-column magazine (one was supplied) was loaded by pressing down upon the follower and sliding in the round front to back. The magazine spring was heavy enough so that upward pressure from the top round against the bolt made cycling difficult. We were able to moderate this condition by leaving the magazine loaded so that the spring wore down a little bit. Single-round loading without seating the round in the magazine was a pleasure because the short throw of the bolt was actually quite smooth when it was not hampered by pressure from the rounds beneath. CZ refers to its controlled feed system as Micro Mauser. With such limited capacity to the magazine we would need to carry extras. (Additional magazines cost $40 each.) But sooner or later, a bolt-gun shooter on a prairie-dog hunt ends up single loading. For storing rounds on the forearm, we like to use an ammo cuff from Mark Otto (motto1930@att.net) for holding up to 40 rounds of ammunition.

At the range we learned that the 3.75-pound trigger (as shipped) was predictable despite being rough. In fact, our ability to shoot this rifle accurately was surprising given the vibration and the sounds that were being reported from the trigger through the stock. Results of our range sessions showed that the 527 Varmint Target favored ammunition topped with lighter bullets. When 204 Ruger was first introduced, the 40-grain bullet was, in our experience, the most accurate. But just as we have seen in our recent tests of 243 Winchester bolt actions, accuracy drawn from lighter bullets is rising to the top. The best group we were able to print firing the 40-grain Federal rounds measured about 1.1 inches across. The 32-grain Winchester rounds were better, but only one group measured less than 1 inch across. But all of our five-shot groups printed by the 24-grain Hornady Superformance rounds were sub minute of angle, including a best of test 0.65-inch-wide group registered at 100 yards. Average velocity produced by our two lighter weight bullets was in excess of 4000 fps. The 40-grain rounds flew at about 3675 fps on average.

The CZ 527 rifles (of which there are seven variants) offer a three-way adjustable trigger (trigger-pull weight, take up, and over travel). We were able to drop the pull weight to less than 2.5 pounds, but were not able to remove the sticky creep. We also noticed that pull weights fluctuated as much as three-quarters of a pound. The other alternative was to engage targets using the set trigger feature. After cocking the action the trigger can be physically pushed forward to an alternate ready position where take up is drastically shortened and pull weight is reduced. As delivered, set trigger pull weight was about 2 pounds. We tried a second round of 100-yard accuracy tests using the set trigger exclusively but couldnt realize significantly better results. Our best group from this session was achieved firing the 24-grain Hornady rounds measuring about 0.75 inches across.

We found that the only way to overcome creep in the trigger was to either press very slowly and wait through a false break or two, or pull the trigger straight through in one deft motion. But the latter method tempted us to snatch the trigger no matter which mode we tried including the set trigger. Taking into account that our prairie dog hunts often involve bouncing around inside a vehicle, safety is always a concern. The 527 offers a two-position safety located on the right side of the receiver. Lever to the rear and downward renders the trigger inoperable and locks down the bolt handle. If the trigger has been staged in the set position and the shooter wishes to deactivate and return to the standard trigger, CZ recommends activating the safety, pointing it in a safe direction and pulling the trigger. We did this at the range and the trigger clicked without igniting the round. But on a hunt in open range its not always possible to determine a safe direction. Opening the action and pressing the trigger to expend the set trigger is a less risky method in our view, hence the preferred practice of single loading. Ultimately, we decided to concentrate on using the standard trigger adjusted to its original setting of about 3.75 pounds.

Returning to the range for 300-yard tests, we were greeted by 22-mph winds that streamed from about 4 or 5 oclock over the right shoulder. Since the 204 Ruger offers a flat trajectory to begin with, we didnt dial in any additional elevation but instead relied upon centering our shots on the 8-inch-wide bullseye inside the first circle found below center on our Nikon BDC reticle. Actually, this was strictly playing a hunch because the Nikon owners manual didnt offer a calibration for 204 Ruger, only for much larger calibers. But our hunch paid off and elevation looking through the upper circle turned out to be perfect for 300 yards. (For more, Nikonhunting.com/spoton provides further information.) Our first group was fired shooting the 40-grain rounds. But after firing some unsatisfactory 4-inch-wide-plus groups, we tried the 32-grain rounds, which werent much better. To our surprise, the 24-grain Hornady rounds cut through the wind the best. Frankly, we were skeptical that the 0.80-inch average achieved at the 100-yard line would translate to anything resembling a 2.40-inch group at 300 yards. But the 24-grain rounds cut through the wind and delivered an average size group computing to just less than 2.65 inches, maintaining its sub-MOA performance. As a result, our 300-yard groups firing the 24-grain Hornady Superformance rounds from the CZ-USA 527 Varmint Target were within the parameters to qualify the shooter to move on to greater distances along the advanced rifle ranges at American Shooting Centers.

Our Team Said: Right away we all thought this was a very appealing rifle. It had all the ergonomic benefits of a prone rifle without being so heavy that offhand or over the shoulder field carry was not out of the question. The bolt action was fast and smooth during single-round loading, but cycling was laborious when interfered with by the stout single-column magazine. However, we were able to reduce friction just by leaving the magazine loaded, so this problem should abate with time. The creaking trigger was a surprise given our past experience with other CZ rifles. A smoother trigger in this package would make this rifle impossible to pass up.