Home Rifles Rifles223 Entry-Type AR-15s Are Short. Is One of These Rifles for You?
Print
Email
Facebook
Twitter 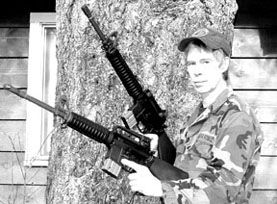 In previous tests on these pages we’ve been far more excited about lightweight AR-15 types than about the normal, full-size military configuration of that rifle. We looked long and hard at the Carbon 15, and one or two others. We think we’re not alone in our attraction to the lighter .223 rifles, judging from our letters. But how about “entry” type carbines, with short barrels and stocks? Do they have any use in the field? Many a cop and shooter want the smallest, lightest yet most efficient .223 autoloader available, so here we present three more alternatives. Two of them are built around the AR-15 concept, but have short stocks and barrels to cut weight and bulk. The third is the often-overlooked Ruger Mini-14 semiauto, which is a lot less imposing in its wood-stocked configuration, but may be just what the doctor ordered if you need a .223 semiauto that is less intimidating but just as effective as the AR-15 types.

Bushmaster XM15-E2S Shorty AK, $885
This gun has a street price around $750, and for that money the owner gets a tricked-out gun with a copy of the AK-74 muzzle brake and detachable top handle with fully adjustable aperture sight within the handle. This good-looking and well finished little rifle had a fluted, chrome-lined barrel. The barrel was 16 inches long with its permanently attached brake, and had a 1:9 inch twist rate. The actual barrel, without the brake, was 14.5 inches long. The mil-spec receiver had protective rails around the magazine release, and also had a forward-assist button. There was a deflection block to keep empties off the face of lefties.

The entire rifle — stock, forend, receiver and barrel — was evenly matte-black finished. The butt stock was very short, as was that of the Rock River AR-15, described below, and there was no trap in the butt. These short butt stocks are commonly called “Entry” or “Tactical” or “Entry Tactical” stocks, but by whatever name they go, you’d better be sure you want one before you buy. On the Bushmaster, this stock gave a pull length of 10.4 inches, which might be ideal if the shooter were wearing a bulky SWAT vest. For most shooters it would be two or three inches too short. Yet with a little practice we found it became almost comfortable. Without doubt, the short butt stock contributed to the fast handling of this rifle, and to the Rock River’s as well.

The pistol grip was small like original Colt AR-15s, which gave easy access to the non-ambidextrous safety. The forend was formed of two tapered plastic pieces, held to the receiver with the original-design, mil-spec sprung collar. Everything fit well, and all was tight. The front sight was a protected post with provisions for fine-tuning the elevation. There were sling swivels fore and aft.

Peering inside this well-made rifle we found no surprises, just excellent workmanship throughout. The rifle came with hard case, sling, and one ten-round magazine. We eagerly took the package to the range.

Our first shot didn’t connect with the generous paper target at 50 yards, so we moved up, and went to work on the sights. As they came, the sights were way off to the right, and the elevation was also off. When we got on the paper, the rear sight was nearly as low as we could get it, and the aperture was almost exactly centered within its protective ears.

The rear sight had the common two apertures found on AR-15s, a field sight with large hole and a smaller-holed leaf for more precise shooting, which was the one we used. Both the Bushmaster and Rock River rifles had the two-aperture setup.

The trigger proved to be a slight burden to achieving best accuracy, even off our machine rest. It broke at 7.8 pounds with a little creep. Also, the front sight on so short a rifle was out of focus for some of our shooters’ unaided eyes, never mind the aperture effect. However, from our machine rest we’re sure we got about all that all three rifles had to give.

The Bushmaster didn’t much like the Malaysian ball, but liked the two types of Black Hills fodder well enough. One group with the former ammo was over five inches at 50 yards, and no, the bullet didn’t strike anything on the way to the target.

There were absolutely no problems with the rifle’s feed or function. It gave the shooter a sense of reliability that inspired confidence. Our biggest problems were the heavy trigger and the very short stock, which made it very difficult to shoot from a dedicated bench rest. However, we got more than acceptable accuracy with the 62-grain Black Hills FMJ ammo, and even better results with that company’s 68-grain match ammo.

We also tried the rifle (all three, actually) offhand, for speed of target acquisition and handling ease. Both the Bushmaster and Rock River rifles were well suited to such close-quarters-battle-style shooting, probably better than the Ruger. The short stocks lent themselves to indoors work very well, and would thus be ideal for home defense or for SWAT applications.

However, we felt the average shooter would want a longer stock and a longer barrel. The longer stock would add lots of comfort for casual shooting, and a longer sight radius would give better field performance with iron sights. Mounting a scope on the Bushmaster would involve either getting a mount that would fit the handle notch, or removing the handle to use the Weaver-style rail beneath it. Then you’d have to find a scope that could be mounted far enough forward to keep it out of your eye. We believe these short-stocked .223 carbines are special-purpose weapons, however, and scopes would be out of place on them, except perhaps for a night-vision device.

Rock River Arms LAR-15, $875
The other name for this gun, as marked on the box, is CAR A4 Rifle ML, and it regularly sells for around $750. But the only designation to appear on the rifle receiver was LAR-15. In fairness, the “Shorty AK” moniker didn’t appear on the Bushmaster. Right off the bat we noticed the Rock River didn’t quite have the nice balance of the Bushmaster. The Rock felt muzzle heavy, which was understandable looking at the two barrels side by side. The Rock River didn’t have fluting on its 16-inch barrel, and the barrel was an inch-and-a-half longer. The Rock River also had almost two more inches of forend length, which gave a two-inch-longer sight radius.

The muzzle brake of the Rock River was more intricate looking than that of the Bushmaster, though they worked about equally well in reducing felt recoil. Both had about the same blast effect, which was not obnoxious with this cartridge, despite the short barrels.

The Rock River rifle was almost the same overall setup as the Bushmaster. The description of the Bushmaster would closely match that of the Rock River, including fit and finish. Differences include the grip, which on the Rock was by Hogue, finger-grooved and rubber-textured.

Also, the Rock had two swivels at the front, one beneath the front sight mount and a removable one on the left side. Another big difference, the detachable rear sight of the Rock River was carried in a second rail, not a handle. This meant you could attach some accessories, like a scope or night sight, without having to remove the rear aperture sight from the rifle. This, however, made for a poor handle, and most of us would prefer a normal carry handle over this setup.

The range session began with the first shot hitting dead center on the paper. Clearly, Rock River spent a little more time getting the sights looking where the barrel looked than Bushmaster. Despite the longer sight radius, the Rock River’s front sight was not a whole lot sharper looking than that of the Bushmaster, to a few of our shooters’ eyes anyway.

The Rock’s trigger was a delight, though, breaking cleanly at 4.8 pounds, a big improvement over the Bushmaster setup. Accuracy was about the same with either AR-15, though the Rock didn’t have the gaping flyers with the Malay ball that we got with the Bushmaster. There were again no unhappy surprises with feed or function with the Rock River rifle. These two manufacturers seem to have the AR system fairly well sorted out.

Ruger Mini-14 rated a Conditional Buy in this company.

Gun Tests Recommends
Bushmaster XM15-E2S Shorty AK, $885. Our Pick. We thought the Bushmaster was a fine rifle, and for those who could use a short, handy rifle for the .223 cartridge, this would be one good choice, in our estimation. We really liked the fluted barrel, the balance, and the fine workmanship throughout. We would have liked a better trigger, which is easy enough to achieve with this design. We thought the balance and overall handling of the Bushmaster was slightly better than that of the Rock River, but the two were very close to each other in performance and value.

Rock River Arms LAR-15, $875. Buy It. The Rock River was a well-made, shorty version of the AR-15 that would please the same categories of shooters who would like the Bushmaster. Some slight feature differences would make the ultimate choice up to you. In both cases, we think the shorty AR-style rifles are better choices than the similar Ruger Mini-14.

Also With This Article
[PDFCAP(4)]