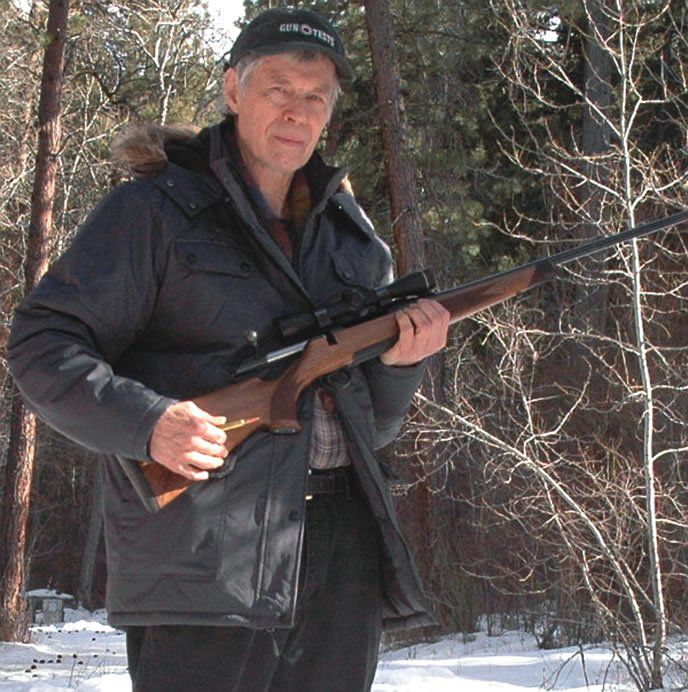 It’s not often we get a truly interesting rifle to test. Most are commonplace, and frankly carry little excitement for our test team. Once in a while a surprise comes along, and that’s what happened recently. This is the Roessler Titan 6, with interchangeable barrels in 300 Winchester Magnum and 270 Winchester (about $1980 for the rifle). The rifle came with no scope mounts and no iron sights, though both are available from the importer. There was, however, an excellent manual with the rifle printed on heavy stock that should last a long time. The receiver was a simple cylindrical type, and we guessed — correctly — that Remington Weaver-style bases would work on it. We used a Leupold 4X scope in Weaver rings for all our testing. We tested the gun with both barrels, using Remington and Winchester 180-grain loads in 300 Mag; and 130-, 140-, and 150- grain JSN Federal ammo in 270. Here’s what we found.

Our search for information about these rifles led us to the Roessler Waffen (Rwa) website (www.Titan6.com), where we were confronted with the worst choice of colors imaginable. It was nearly impossible to read anything on the website, the printing being dark gray or dark green on a black background. Was it the intent of the makers to keep us in the dark about these interesting rifles? It sure seemed so.

Hidden on that webpage and elsewhere on the ‘Net was information that the rifles are also available with stainless-steel barrels and polymer stocks, if desired. After long looking, we found the importer’s website, and it helped us get a grip on this product. The lone importer in the U.S. is TR Imports (TRImports.com) near Dallas. That website has some legible information and a good short video explaining the Titan rifles. However, no pricing information was to be found there for the spare barrels/bolts/magazines. Changing from the magnum to standard caliber requires not only a different barrel, but also a different bolt and magazine. However, each of the bolts and magazines serves for many calibers, so you won’t go broke buying separate ones for each different caliber. For example, the 270 magazine ($93) serves for four other calibers. We phoned them to find out the 270 barrel will set you back $407, and the spare bolt (without the interchangeable striker assembly) is $368.

It’s immediately obvious to us that if you need two calibers, the way to save money is to get them with the same head size. For instance, a 243 and a 30-06. That lets you use the same bolt for both, with only a different magazine needed. Having a standard caliber and a magnum caliber is an expensive way to go. But if you have two calibers on the same rifle, why not have more? Adding a 338 Win. Mag. to our test rifle combo would cost only $407. And there are 31 calibers available, so the choice is yours.

Roessler tells us it is small, independent, and based in Kufstein, Austria. The company began in 1996 with the intent of building top-notch hunting rifles that incorporate innovation and a classic, hand-worked look. As noted, the company offers no fewer than 31 different calibers, from 222 to 375 Ruger. Half a dozen of the smaller ones utilize the Titan T3 action, with three bolt lugs. The remainder are in the T6 setup with its six-lug bolt. Not to confuse the issue too much, but Roessler also offers a 16-lug straight-pull rifle in a multitude of calibers. We will not discuss that rifle further here.

Both the Titan 3 and Titan 6 have a 60-degree bolt lift. Some of the barrels are made by Wilson Arms in the U.S. Others, probably the metric calibers, are made by Heym in Germany. The rifle has an aluminum receiver, available, like the barrels, in two finishes, black or silvery (stainless). The bolt locks into the back of the barrel, not into the receiver. This results in a light rifle with an exceptionally smooth bolt. Further, it permits for easy barrel changing. More on that later.

The tricks for removing and reinserting the bolt are the nicest we’ve seen in many long years. To get it out, open the bolt, press the trigger and pull the bolt smartly out the back. To get it back in — which stymied us until we read the manual — insert it with the bolt knob vertical, press the trigger, and shove the bolt halfway home. Then simply twist it to the right until it stops. That’s it. The lock time is incredibly fast. Tests (not ours) have shown it to be 1.7 milliseconds, compared with the fast Remington 700 rifles at 2.6 milliseconds.

The stock appeared to be French walnut, though some of the information we managed to find indicates the wood is from Italy. The style is very much to our personal liking, though the average U.S. shooter might not like it, until he tries it on his shoulder. There is a Schnabel in contrasting rosewood. The main stock wood has sufficient grain to keep it well out of the “plank” category. The pistol-grip area is curved and well checkered so one can pull the rifle firmly into the shoulder to alleviate recoil. The recoil pad is slim but entirely sufficient in its design to have kept the rifle from hurting us when shot off the bench with hot 300 Win. Mag. loads with 180-grain bullets. The slight cast-off helps that, too.

The wood has an oiled finish, which makes it easy to repair nicks and dings that are relatively permanent in epoxy-finished stocks. There were sling-attachment points under the forearm and butt. The four panels of checkering were of excellent quality. Fit and finish were excellent everywhere we looked. The integral trigger guard and magazine housing is made of polymer. Inside the rifle the recoil is taken by a polymer box that captures the barrel-changing clamp at the front, and by an aluminum insert at the back that holds the rearmost of the two action screws. These are Allen headed, metric size, and the same-size wrench is used to remove the action from the stock and to undo the clamp screws to swap barrels. We were somewhat surprised at the use of polymer for the recoil box, but found that not only does it work to perfection, the rifle was extremely accurate in both calibers.

With an all-up weight of 7.8 pounds with our 4X Leupold attached, we expected the rifle to kick us severely. That did not happen, not from the bench nor while standing. Yes, the barrel rose in recoil significantly when we were standing and shooting the 300 Win. Mag. loads, but the stock design, combined with the good recoil pad, caused us no discomfort. Part of that might have been from the somewhat upright head position this rifle requires, another part of the excellent stock design.

The magazine comes out by squeezing two opposing serrated latches. A spring-loaded plunger shoves the mag free of the rifle, easing its removal. The magnum magazine held only two cartridges, so the rifle is a 2+1 when set up as a magnum. If that’s not enough, extended magazines are available. The standard-caliber magazine holds three rounds. Slipping a round up the spout is easy, unless the loaded magazine is fully in place. Then the rifle prefers to feed from the box.

The barrel length for the 300 Win. Mag. was a full 26 inches, so it got the maximum out of the loads. The 270 had a 22-inch length. Changing barrels was extremely easy. We used our own Harbor Freight 4.5mm wrench with T handle (the accompanying Allen wrench got lost in shipping). We took out the two action screws, first removing their small rubber caps, a nice touch that keeps the wrench holes clean.

The action came out easily. The same wrench loosened two clamping screws on the receiver front, and then the barrel pulled out easily. We first lightly oiled the 270 barrel and wiped off all the excess oil and slipped it into the receiver. Before tightening those two screws, we put the bolt in place and locked it down. We then tightened the two locking screws, checking our guesswork with a torque wrench. The suggested torque is 62 inch-pounds, which translates to a good squeeze on the T handle. We were right on the money (having calibrated fingers, of course). This was all spelled out in the excellent manual. We then put the rifle back into the stock, and with the same torque snugged down the two action screws.

Testament to the Titan’s system was that our shots were still on the paper, the impact having moved maybe 5 inches down from the change of barrels. The 270 set up performed perfectly, with one of our groups going just under an inch. We happily noted that the rifle preferred the heavier 270 bullets over the 130-grain ones, which matches our own preferences in that caliber.

On the range, the rifle performed flawlessly. Feeding was as slick as we’ve experienced in any rifle. Ejection was by a plunger, and worked just fine. The extractor was reminiscent of the post-’64 Winchesters, a spring-loaded sliding catch. The movement of the bolt in its raceway was also glass-smooth. The trigger was absolutely a wonder. It’s the best we’ve experienced since the Savage AccuTrigger, light, clean, crisp, zero overtravel. Just think of firing it and the rifle goes Bang! It is vital to keep your fingers off the trigger until you are ready to fire because let off is only 2 pounds.

The safety was also a joy, being a tang type that we found natural to operate. Pull it all the way back, and it locks the bolt. In the middle it unlocks the bolt, and all the way forward lets you fire the rifle. Note that you cannot remove the bolt from the rifle unless the safety is fully off, because it’s necessary to be able to press the trigger enough to release the mechanism.

There is one thing we don’t like about this rifle. The bolt takedown is simplicity itself, and we loved that. Twist the rear slightly to the right and the innards come out. This reveals the firing pin, which we don’t like even a little. It’s tiny, sticking out from its square base with no stress relief. We strongly suspect it’ll break with not much dry firing. To reassemble the bolt, you must drop that pin into the bolt and rattle it around until it slips into place. Then the rest of the mechanism goes back in easily and snaps back into place with a twist. That, too, is great. But we think the tiny firing pin is the Achilles heel of this set up.

The only other problem we can see with this rifle, if you want one, is finding one. To give an idea of the chance of your finding a Titan outside the U.S., there is one distributor in Argentina, two in southern Africa, one in Australia, one in Iceland, one in New Caledonia (can you find that on the map?), a few other distributors here and there, and many dozens throughout Europe.

Our Team Said: We think it’s well worth the trouble of looking for the Roessler Titan 6 rifle. We found the Titan offers excellent performance and innovation in an attractive package, plus the option of changing calibers with the twist of a wrench. While it’s not inexpensive, it’s a great rifle, and we were mightily impressed with it.