The roller-locked CETME Model 58 was the basis for Heckler & Koch’s G3-based rifles, followed some time later by a semiautomatic version labeled the HK-91, which isn’t gas- or recoil-operated in the conventional sense. The rifle employs a delayed blowback system with a nonrotating head and twin rollers. These rollers, located on the bolt on each side, lock into detents in the trunnion of a stamped steel receiver.

On firing, force on the bolt keeps the action locked until the bullet exits the barrel, then the action unlocks and the bolt is jolted to the rear against spring pressure. The bolt then returns to battery, stripping a cartridge from the magazine along the way. We have previously tested three roller-locked rifles made in the U.S., including the 308 Win. PTR-91 from JLD Enterprises. We mostly praised the PTR-91 rifle in the January 2005 issue, save it needing a trigger job and a flash hider. We also gave Buy recommendations to the Vector Arms V-53 in 5.56 NATO and the Bobcat Weapons BW-5 9mm in that same article.

Here, we revisit the PTR-91 and a similar rifle, the Century Arms C91 Sporter, both chambered in 308 Win./7.62 NATO. The original PTR rifle was first conceived in 2002, when JLD Enterprises purchased tooling and designs for the HK line of roller-lock weapons from Fabrica Militar of Portugal. The original “Precision Tactical Rifle” HK-91 clones were produced mostly from surplus parts acquired around the world from 2002 to 2006. Then, in 2006, PTR91 Inc. was organized and expanded beyond the original 91-style clones. The company was re-organized in 2010 with new management, and then three years later, PTR Industries made news when it announced it was leaving Bristol, Connecticut and was moving to South Carolina because of the former state’s just-passed stringent gun-control laws.

Century Arms, headquartered in Delray Beach, Florida, makes and warehouses its surplus firearms and accessories business in Georgia, Vermont. Founded in the 1960s and run by William Sucher and Manny Weigensberg, Century is the largest importer of Romanian-made WASR-10 AK variants. The C91 has been supplanted in the Century Arms catalog by the C308 rifle.

So, no surprise — accurate, powerful, and well-made 308-Win. semi-auto rifles remain strong sellers. The question we wanted to know is, do shooters have to pay a premium to get one of these roller-locked mechanisms? The short answer is “No,” but the longer answer appears below:

At the time of this writing, CDNNSports.com had this rifle in stock for the price listed. The PTR-91 and the C91 use the characteristic fluted chamber that helps to dispel pressure and allow easier extraction of the fired case. There is an interesting history behind these rifles, beginning with engineers escaping Germany after World War II and developing the Spanish CETME rifle, followed by the adoption of the rifle by Germany as the G3/HK-91 and now the variants we are covering in this report.

The PTR-91 G.I. version as tested represents a base rifle. There are other tactical rifles and target guns available from PTR91, but they share the same action. The operation of the rifle was straightforward. An operating handle on the left side of the barrel was used to cock the action. This handle does not reciprocate with the bolt as the rifle fires. The cocking handle may be used to lock the rifle open. The barrel featured a six-port muzzle brake, a feature not found on the C91.

The synthetic forend offered excellent gripping surface. Just below the cocking handle was a checkered section about 4.25 inches long. The ribbed, vented forend offered good adhesion when firing the rifle. The firing grip handle wasn’t stippled, but instead was smooth and hollow. The handle offered good retention by its geometry.

The receiver was particularly well finished, we thought. The bolt was also well polished. The welds necessary on a stamped-steel receiver were less pronounced and noticeable than the welds found on the C91 rifle, in our view. The magazine release was tight and positive in operation. The safety operated smoothly with a positive indent. All of the controls were readily accessible and allowed rapid manipulation. Trigger compression was smooth but relatively heavy at 9.5 pounds. The stock featured a hard-rubber recoil pad.

We liked the muzzle brake of the G.I. model, and in firing it seems to have made a difference in control. The greatest advantage of the PTR-91 over the C91 was the sights. The shrouded front post is the same on each rifle. The rear diopter sight on the PTR is among the best battle sights ever fielded, in our opinion. The drum was easily moved from the 100-meter position to the 400-meter position. The short-range setting uses an open V-type rear sight. The PTR-91, however, used a company-developed rear sight that also featured a windage adjustment — an important advantage in a rifle intended for all-round use.

There are a number of different magazines for CETME, C91 and HK-91 308 rifles. In this case we had eight magazines total from various sources. All locked into the PTR without difficulty. In the C91 rifle, four locked as designed, but four gave trouble and required a hard slap to properly seat. This was definitely a point in favor of the PTR-91.

After the initial range work and accuracy testing, we traveled to the range again. An additional five magazines were fired with the Portuguese surplus, Winchester USA, Fiocchi FMJ and the remainder of the loads used in accuracy testing. There were no malfunctions.

Firing for accuracy at 50 yards, we were limited by the heavy trigger and the iron sights. The best group of three shots was with the Black Hills Match load, just under 1.2 inches. In offhand fire both braced and unbraced, hitting the X-ring on man-sized silhouettes wasn’t difficult. We thought the PTR-91 offered a steady firing platform and excellent practical accuracy.

Our Team Said: After firing the C91, we feel that the PTR-91’s muzzle brake helped in controlling recoil. The PTR-91 also had a superior rear sight and compatibility with all types of magazines. Like our test many years, ago, this rifle would be vastly improved with a trigger job.

The forend, cocking handle, and mode of operation were identical to the other gun. Much of what has been said concerning the operation of the PTR-91 also applies to the Century Arms C91, so we won’t re-cover that ground again.

Elsewhere, the first and most noticeable difference between the two rifles was the finish, with the PTR-91 rifle having OD green furniture and the CA rifle a black stock and forend.

On the action, we noticed more weld marks on the C91. The rifle is assembled from surplus parts and this cannot be helped, but it may be a consideration. Otherwise, fit and finish were good to excellent, the equal of the PTR-91 G.I. in most cases, we thought. Overall, the C91 seemed to be a credible result of putting together a supply of military surplus parts.

Functionally, the safety operated positively, and the magazine release functioned as designed. The Century’s sights proved well regulated for 308 Win. loads as tested. We liked the grip of the C91 better — its modest thumb rest and solid construction impressed us. Trigger compression broke at 10.5 pounds, a full pound heavier than the PTR-91. Still, it was not a factor in offhand fire or firing for accuracy, we felt.

We mentioned the issues with magazines, which is something familiar to HK/CETME/ PTR-91 rifle enthusiasts. We learned a bit and found that with a bit of file work, we could convince most magazines to insert and function.

The C91 is supposed to require a modest break in by reputation, but this rifle came out of the box firing for our team of shooters. The initial 100 rounds of mixed loads were fired without incident, using five different magazines, and finishing off the Portuguese surplus. We felt that we could detect the absence of the muzzle brake on the PTR-91, but it wasn’t a big issue in the final scoring, our shooters said.

Firing off the bench for accuracy, the C91 delivered its best results with the Silver State Armory 168-grain boat-tail hollowpoints at 1.5 inches, with average accuracy for all three loads trailing behind the PTR-91. Since the sight picture was identical and the trigger similar, we had to conclude that the PTR-91 rifle was just more accurate.

We also had occasion to test a second Century C91, this time with an eye toward upgrading the rifle. On it, we fitted a PRS2 stock from MagPul Industries ($255). This rifle stock allowed length-of-pull adjustment from about 15 to 16.2 inches. The adjustable cheekpiece rose up to 1.8 inches in elevation and offered 0.65 inch of comb adjustment front to back. The C91 class of rifle has a forward weight bias, so the heavier PRS2 stock resulted in an excellent feel in any firing position. This part will fit either the PTR-91 or the C91 rifles.

Our Team Said: There was nothing wrong with the Century Arms C91; however, when we put it side by side with the PTR-91, our shooters uniformly preferred the latter. 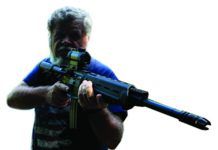 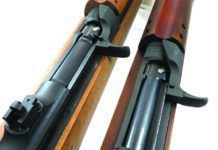 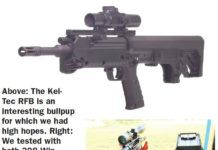