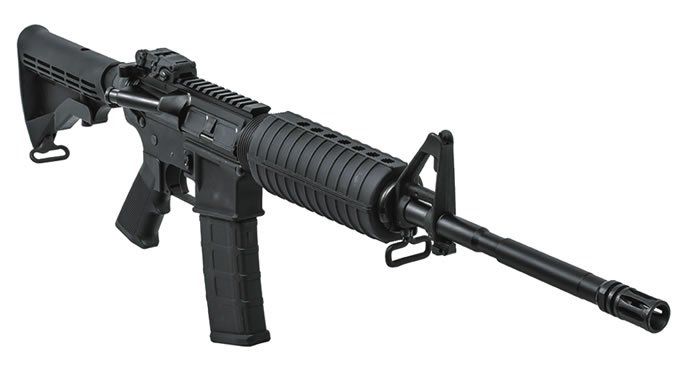 It isn’t unusual for a dozen AR-15 rifles from different makers to be on the shelf at most gun shops. Some are regional makers, some are giants like Colt, and a few are new companies trying to earn a good name for themselves. The modular construction of the AR-15 means that the basic receiver may be fitted with a number of different barrel types, stock designs, and other accessories. As such, the price point is flexible, depending upon whether the user wants an entry-level rifle or something more. We picked the rifles in this report to see if the details and accessory package on a more expensive rifle really offered enough performance to justify the extra money. There are literally dozens of choices to make between rifles in this price zone, so as much as anything, this was a test of accessories and set-up, culminating in our advice on how to buy an AR that’s a flexible platform for growth as possible.

The AR-15s We Tested

The Mk4LE 55AE160 5.56x45mm rifle, $925 MSRP, is what CMMG says is “our basic rifle.” The Mk4LE is available in 5.56 NATO, as tested here, as well as 300 AAC Blackout, 9mm Luger, and 22 LR. All versions feature a nitrided 16.1-inch-long 4140 Chrome/Moly steel barrel in an M4 profile, except the 300 Blackout has a M300 multi-role barrel profile. The standard configuration includes a “F” marked front sight base and a MBUS rear sight. The muzzle had an A2-style flash hider on top of 1⁄2×28 threads, in case you want to add another flash hider or suppressor. Furniture included M4-type two-piece handguards, an A2-style pistol grip, and an M4 6-position buttstock on a Mil-Spec receiver extension. The upper receiver was a forged 7075-T6 AL M4-type with a Carbine-length gas system. The lower was a standard AR-15 type. The trigger was a single-stage Mil-Spec style unit that broke at 6 pounds. The gun weighed 6.8 pounds unloaded. The W.A.S.P.-treated barrel finish (Weapon Armament Surface Protection) is a salt-bath ferritic nitrocarburizing surface conversion more commonly referred to as nitriding. The nitriding conversion is applied to the barrel inside and out, along with the front sight base on CMMG’s LE rifles and uppers. CMMG claims nitriding offers improved wear, abrasion, and corrosion resistance when compared to hard-chrome lining or phosphating. We found this model in stock recently for $782 at CheaperThanDirt.com, $790 at Impact Guns, $800 at HinterlandOutfitters.com, and $885 at NelsonTactical.com, so we listed it in this comparison at $825, not including the various charges businesses tack on to get you the gun.

This was a gas-impingement rifle with a flat-top receiver, but it retained the standard gas-block-mounted front sight. The MK4LE’s handguard differs little from the original M16 furniture. In our experience, this handguard is fine for most shooting. We found the CMMG handguard did not limit the shooter in firing tests, but it does limit choices for mounting accessories, such as a light. The pistol grip was also a standard type, with serrations on the back of the handle and a finger groove in front. The rifle featured a good-quality pop-up MBUS sight that fit directly on the rail, and which could be used with the existing front post as the primary sight. The 6-position stock featured the pointed-toe design, which worked fine for us except in prone fire.

We ordered a Battle Rifle Company BR4 LIT Carbine 5.56 NATO/223 Rem., $1495, which came with added factory-available upgrades. The most noticeable difference in the BR4 compared to the CMMG product was the handguard, a Midwest Industries KeyMod-type rail that’s lighter than a Picatinny-style front, but to which the shooter can attach accessories with a special connector. A quick look at the MI website shows that this rail would cost about $200 to add to another rifle. The fold-down Magpul MBUS front and rear sights were good examples of the breed, and the front sight mounted on a small front section of Picatinny rail. The BR4 also featured a six-position Mission First Tactical Battlelink stock with an angled bottom piece. The Battlelink Minimalist features an enhanced cheekweld and a non-slip rubberized buttpad, which is angled for faster presentation and a sure mount for the gun, even when wearing body armor or a tactical vest. There was a quick-detach sling-mounting point under the buttstock to allow for ambidextrous use. The pistol grip was an Ergo Grips soft-rubber design. The flash hider was a BRC model that was about three-quarters of an inch longer than the CMMG rifle’s hider.

The charge given the team was to compare these rifles as personal-defense, 3-Gun competition models, and hunting rifles. Recreational shooting is probably the use to which most AR-15 rifles are put, but we want a reliable and accurate platform irrespective of the task.

To get started, the rifles were field stripped and inspected. The BRC had a chrome-lined bore and chamber, which we prefer over the CMMG’s nitriding coating. A properly staked gas key is even more important, and all AR-15 rifles are not properly staked. These keys may still be removed with enough elbow grease, but proper staking to keep them from coming loose is essential.

The bolt carrier of the AR-15 rifle has a protruding part along the upper area of the bolt. This is the gas key. During firing, the gas key accepts firing gas that is bled from the barrel. The gas key directs this gas to the piston chamber of the bolt. The bolt unlocks, and the bolt-carrier group is forced to the rear. This cycles the action. The gas key must remain flush with the bolt. Otherwise, gas will flow around the bolt and not operate the action. Both bolt carriers exhibited proper carrier-key staking. However, the bolt group of the BRC rifle showed superior staking, in our view. Also, the bolt group of the BR4 is boron-coated. The advantage will be recognized by those firing prodigious amounts of ammunition. When cleaning each rifle in this test, one bolt cleaned up as well as the other.

Ammunition was divided into three types: burner, service or hunting grade, and match grade. The rifles would be fired at least 300 rounds each, using a combination of PMags and Brownells, magazines which we have previously rated highly in head to head testing. We assessed general handling, reliability, bench rest, and position shooting, including offhand fire. Off the bench, we used the iron sights as supplied at 50 yards. At 100 yards, we fitted a Nikon M-223 3-12x scope with 42mm objective and a corresponding one-piece M-223 mount that mated with rails on both rifles. M-223 3-12x42SF BDC 600 riflescope with side-focus parallax adjustment. The BDC’s see-through ballistic circles offer an advantage for long-range shooting, yet allow a normal sight picture for shorter-range shots where the crosshair itself is the aiming point. The various aiming points built into the BDC reticle allow hunters to hold dead-on up to 600 yards, taking the guesswork out of figuring elevation and bullet drop compensation.

The majority of the loads used in testing in offhand were the Black Hills 55-grain FMJ load in the blue-box remanufactured line, which cost $28 per 50 rounds at Surplusammo.com. We also used a variety of bullet weights and styles for accuracy and function testing, including 52-grain Black Hills Match loads, Hornady 55-grain jacketed soft points, and Fiocchi 77-grain Exacta loads.

There were no rifle-related failures to feed, chamber, fire, or eject during the tests and side trips by raters. Both rifles were reliable with a variety of ammunition. Each rifle demonstrated good accuracy, but the Battle Rifle Company rifle was more accurate at every range and with every load.

A considerable difference was noted in the trigger action. The CMMG rifle’s trigger compression broke at 6.0 pounds. The action was good, and reset as rapid as an AR-15 should be. The Battle Rifle Company trigger was heavy at 8.75 pounds — a noticeable difference. The CMMG trigger certainly had the better trigger action. However, that advantage didn’t translate to better accuracy.

Most of the firing was done in combat-type drills on silhouettes at 25, 50, and 100 yards. Though the sight pictures on both were fine, we soon noticed the shorter sight radius on the CMMG wasn’t as accurate when fired side-by-side with the BRC. This was due to the Battle Rifle Company’s sights being mounted further forward on the KeyMod rail.

The CMMG demonstrated all of the good points of the AR 15 — fast handling, light recoil, rapid fire hits on target, and reliability. The CMMG’s polymer handguard was fine for most shooting; after all, the AR-15 does not kick much. The BRC likewise handled well at short range, our shooters said. The appearance of the rifle and the handguard give the impression of a longer rifle, but this isn’t true. Only the long muzzle brake makes the rifle 0.75 inch longer than the CMMG rifle. Our testers said the BR4 was as lively in the hand as the CMMG. The Midwest Industries forend received high marks. It was light, comfortable when firing, and allowed many options in mounting accessories.

The BRC’s buttstock, from Mission First Tactical, received high marks for its release, which we deemed the superior type, and for superior rigidity. The indented buttplate was also better than the M4-style pointed metal version on the CMMG, in our view. In more detail, our military rater went prone and really homed in on the 100-yard target with both rifles. He did not like the design of the CMMG’s stock. Its pointed buttplate wasn’t as stable as the flat butt surface of the BR4’s stock, he noted. The stock of the CMMG had slightly more play, which varies from stock to stock in the AR-15. It would cost about fifty bucks to upgrade the CMMG with the MFT buttstock. This was a clear edge for the BRC.

A minority of the team liked the serrations and feel of the pistol grip of the CMMG better. One noted that it was less sticky when moving from firing to rapid magazine changes. However, most raters preferred the Ergo Grip, which may be added for about $30.

When the CMMG rifle is available for about $825, it’s hard to knock it. It was accurate enough and seemed well built. But when we shot the Battle Rifle Company LIT Carbine side by side with the basic CMMG AR, it was easier to see how the more expensive gun’s superior handguard, buttstock, grip, and sight radius added up. The BRC’s boron-coated bolt adds even more expense.

We felt that with a better trigger action, the BRC rifle would have performed even better, but in the end, its heavier trigger was not the detriment to accuracy we first thought it might be. The forend of the Battle Rifle Company was superior on the grounds of comfort in firing, not only compared to the CMMG, but also to various quad-rails with sharp edges. The BR4 forend also allowed better control in firing, so its comfort and control received high marks. The buttstock was likewise superior.

If we were just entering the AR market, we’d choose to pay for as much gun as we could stand from the get-go. In this case, the Battle Rifle Company BR4 LIT Carbine costs a lot more, but it’s a better gun in nearly every way. That isn’t always the case with other handguns, rifles, and shotguns. Oftentimes, we’ve found, the less expensive gun outshoots and outhandles a supposedly better product that simply winds up costing more. In this case, however, if you were to shoot these rifles side by side as we did, we think you’d agree with our ranking. 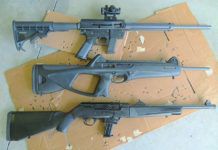 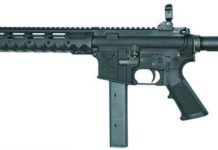 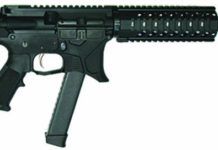