At was Colonel Townsend Whelen who famously said, “Only accurate rifles are interesting.” We recently tested four examples of today’s crop of 22 LR bolt-action rifles to see if any could achieve “interesting” status, and we were gratified at what we found.

Choosing samples from the less-than-stratospheric part of the market, we wanted to know if these somewhat more moderately-priced rifles were sufficient for certain accuracy applications. Our first test piece was the Ruger Precision Rimfire 8401, $480. The next entry was the B14R from Bergara, $950. Third was the Tikka T1X, $519, and last was the Christensen Arms Ranger 22, $830.

Still mired in the great ammo panic/hoard/drought, we used our standard source to locate match 22 LR ammo. AmmoSeek.com is an aggregator that does a very good job of finding and listing ammo that is currently available for sale. Sticking with 40-grain standard-velocity rounds throughout these tests, we selected SK Match, Eley Tenex, and Eley Match. All testing was done at American Shooting Centers in Houston. We fired multiple five-shot groups at 50 yards. All rifles were well-sandbagged in a Caldwell TackDriver Pro (Brownells.com 100-027-023, $49), further supported by a large rear bag, heavy from Tab Gear (TabGear.com, $34). Velocities were measured by LabRadar (MyLabRadar.com, $559). 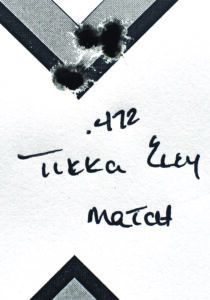 For optics, we used one of the outstanding Bushnell Elite Tactical XRS3 scopes with the G4P Precision Reticle (Model: ETXRS3G4, $1700). These are very popular on the PRS circuit right now, and we can see why. The Elite Tactical XRS3 is a 6-36×56 variable. The 6-36 power range may be a bit much for PRS, but it works well for F-Class, and the shooter always has the option to dial down the magnification. The G4P reticle provides a variety of subtensions, especially on the horizontal crosshair, which, in turn, makes holding off for wind calls simple and precise. We found the glass to be clear and the adjustments to be consistent. Competitive shooters might easily spend $4000+ on good scopes, but not everyone can. Not everyone has to. There is even a Production division in PRS where they try to limit the initial investment a shooter has to make to get started in the sport. The $1700 price tag for the Bushnell fits well within the price parameters (maximum $4500 for rifle and optic) for Production division without handicapping the shooter. Do yourself a favor and check this scope out. Now to the rifles.

Gun Tests magazine has covered Tikka centerfire rifles in the past (see the March 2020 and October 2021 issues) with very favorable results. While certainly not cheap, neither are they expensive and, we feel, offer a great value for the cash required. Tikka is owned by Sako which, in turn, is owned by Beretta, three companies that know something about producing quality firearms.

The Tikka centerfire rifles share quite a bit of common technology with the more expensive Sakos. They tend to reduce their price point by limiting options. For example, a single action length is used for both short- and long-action cartridges. We wondered if the Tikka T1x would do the same thing. The two lines share a few of the same traits, but the compact T1x is 22 LR sized all the way. Bolt throw was only about 1.5 inch, feeling smooth and fast all the way. The bolt handle is the same size Tikka ships on its hunting rifles, though not the oversize piece to be found on a Tikka T3x Tac A1. Bolt throw was very short and fast to operate.

The 20-inch barrel is cold-hammer forged and is threaded 1⁄2×28. Of course, a thread protector is provided. The medium-profile tube measured 0.73 inch just behind the threads. We thought it was heavy enough to stabilize while shooting and light enough to be carried in the field. The barrel is free-floated from the stock, which offered several cool features of its own.

The synthetic stock is very rigid and allows the pistol grip to be swapped out for a more vertical piece. Check the Beretta website for more information. A beavertail fore end can also be added, and an aftermarket adjustable cheek piece is available. These may be synthetic stocks, but they are also foam-filled, keeping them from making that “thunk” sound when we allow them to touch a tree. Length of pull was a bit short for us, but spacers can be added to fix that.

Our action arrived with a 5.7-inch Picatinny rail on top. It is a 0-moa piece, so no additional elevation is added to the scope, perhaps leaving this rifle somewhat limited in the long-range game. That is easy to fix with an extensive selection of Tikka aftermarket parts at TikkaPerformance.com. We spent a whopping $10 to replace the trigger spring, lowering the trigger pull from 2.5 pounds to 0.9 pound — safely and easily. The thumb safety is a two-position piece mounted to the rear of the bolt handle. The 10-round magazine is proprietary. Operating smoothly and consistently, we had no issues with it.

Our Team Said: Accuracy was very good, averaging 0.474 inch for five-shot groups fired at 50 yards. This effort placed the Tikka in third place, but it was only 0.035 inch on average out of first place. The Tikka preferred the Eley Match ammo. The light weight became a bit of an issue when we tried go-fast drills, but this rifle wasn’t designed for go-fast shooting. We found the balance to be outstanding for a rifle we might carry in the woods all day. We had access to a KRG chassis that accepted the Tikka T1x barreled action. Suddenly, we had a long-range rifle, and whoever might choose the Tikka would also have the option to specify which purpose their rifle would perform.

We tested at American Shooting Centers in Houston. We used a LabRadar chronograph (MyLabradar.com, $559) to determine muzzle velocities. We fired all shots for group from a Caldwell TackDriver bag ($49 from Brownells.com) and a Tab Gear large rear bag, heavy ($34 at TabGear.com).