In the sporting clays world, shooters are always looking for an edge to give them an advantage over other competitors. Naturally, firearm manufacturers are more than willing to make new and improved models of shotguns available to this anxious audience. At times, the new and improved versions feature radical changes in typical shotgun dynamics, while there are some cases when just a minor tweaking is unveiled to the shooting crowd.

One of the latest models to be introduced into the sporting clay market of moderately priced over-and-under shotguns is the Remington Premier Competition STS. This shotgun is a dramatic change from the companys over-and-under that once dominated the skeet and trap fields – the Remington Model 3200.

Lighter, trimmer, and quicker handling, the Competition STS was developed after consultation with top sporting clay competitors who drew upon experience and personal desires to offer suggestions about features in the new model.

We were able to get our hands on one of the new models and selected the well-established Browning Citori XS Sporting as a good head-to-head match up.

The Browning model has been a popular shotgun in the sporting clay circuit for several years and features the same solid, dependable design of several over-and-under shotguns made in Japan for the company.

With its trademark deep receiver – a full quarter-inch deeper than the Remington – that features locking lugs in the bottom of the receiver, the Browning is one of the big boys on the range and has a well-established reputation.

This gun is considered a classic over-and-under that is similar to the popular Model 425, which has been discontinued, and the current production Model 525 Sporting. They are all made in Japan with similar frames and locking systems that use lugs in the bottom of the receiver to help reduce recoil.

The tapered locking bolt, recessed into the bottom of the receiver, also allows the bolt to set deeper through extended usage to keep the system tight as a drum.

With the locking lugs underneath the receiver, the recoil is transferred through the bottom of the action, rather than the top, and reduces muzzle jump. That is a feature we appreciate.

Weighing in at a slightly heavy 8.25 pounds, this was the first 32-inch-barrel shotgun handled by some of our test-team members. To a person, they liked the heft and feel of the Browning, particularly in the way it pointed and then glided through targets.

Drop at the comb was 1.5 inches, and drop at the heel of was 2.25 inches, fitting our team in an acceptable manner. The adjustable length of pull, created by moving the trigger forward or backward, was a well-received feature of the Browning, in addition to the three different styles of gold triggers. The LOP range was 15 inches down to 14.5 inches – receiving high marks on our score cards.

We were also very impressed with the trigger pull of the Browning. The top barrel broke at 4 pounds and the bottom pull was 4.25 pounds. Both pulls were very crisp, and we consider them some of the best factory triggers we have encountered.

Both the Browning and the Remington featured palm swells on the grip for right-handed shooters. Since none of our team members was a lefty, this feature was appreciated by everyone in our group. A palm swell allows for a firm, yet comfortable grip with the trigger hand – a plus for any shooter planning to spend a lot of time on the range.

We liked the inclusion of several different colors for the HiViz Pro-Comp front sight (white, red and chartreuse) provided as part of the accessory package, but the offering of three different styles of triggers was our favorite feature.

Adjusting, removing and reinstalling the triggers was very simple and was a customizing feature that found favor with each member of our test group.

During our trip to the patterning board, the Browning produced a nearly uniform 50-50 spread at 30 yards, with half of the hits above the center and half below. We were impressed with the solid pattern that also produced solid hits on clays.

The only downside to the Browning was the lack of extended chokes, although several after-market versions are available in addition to extended chokes marketed by Browning.

As for handling ability and target-busting ability, we found no fault in the Browning.

This is the companys latest venture into the over-and-under market and is quite a change from the venerable Model 3200 that once dominated the skeet-and-trap fields.

Our first impression was that the Remington, made in Italy, was very similar in shape and appearance to Beretta over-and-under shotguns, which are also made in Italy.

Unfortunately, we dont believe that a lot of thought went into the design of the forearm release mechanism. Several of the smaller, less muscular members of our team encountered problems in attempting to depress the release.

With its 30-inch barrels, the Remington was exactly 2 inches shorter than the Browning, but also tipped the scales at only 7.25 pounds. That one pound made quite a different in the heft and balance of the shotgun.

We found that the balance of the Remington was more to the rear (near the right hand for right-handed shooters) rather than between the hands like the Browning. Just that little difference in the barrel weight and handling could be felt in moving to targets.

The glide factor was not quite as smooth as the Browning, although with minor adjustments, we soon had little difficulty in busting clays.

One of our major concerns was with the trigger pull. The top barrel touched off at 7 pounds and the bottom barrel pull was 7.25 pounds. Both were deemed excessively heavy, and we would recommend a trip to the gunsmith for adjustments.

On the patterning board, the Remington produced a 40-60 spread at 30 yards, with more of the pellets striking below the center than above it. The pattern was also slightly ragged, with some holes that would have resulted in missed clays.

However, this shotgun performed well on the range and, with minor adjustments to the LOP and comb of the stock, just might give a shooter the edge necessary to earn a trip to the winners circle. 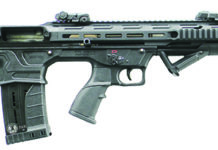