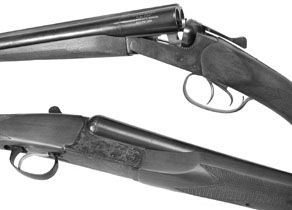 Dove hunting offers prime September shooting action in many states, and the quest for the best gun for that sport continues unabated. Because most dove hunters have batting (shooting) averages on par with a AAA shortstop coming to the bigs—if he hits his weight, he’s lucky—there’s always interest in finding a better gun to hit the tricky-flying birds.

We recently tested a pair of double-barrels suited to pass-shooting doves this fall. Both 12 gauges featured barrels chambered for 2.75- or 3-inch shells, and they were inexpensive enough where a little blood on the stock or a ding in the metal wouldn’t cause cardiac arrest. Our test guns were Baikal’s IZH43 Basic, $190; and American Arms’s Brittany Side x Side, a boxlock with an English-style stock, $450. We ordered both guns from CDNN, (800) 588-9500 or www.cdnninvestments.com.

Obviously, the Baikal had a significant edge in price. But from our perspective, a bad cheap gun isn’t worth the money, if it came down to that. So we lined up these 12 gauges and shot them side by side at American Shooting Centers’ Five-Stand setup in Houston to see how they hit a variety of flying targets similar to what we would see opening day.

Because the Baikal accepted only 2.75-inch shells, our test ammunitions included Estate Cartridge’s soft-shooting 23/4-in., 7/8-ounce No. 8s; Remington’s Shurshot Heavy Dove shotshells, loaded with 11/8-ounces of No. 71/2s; and the Federal High Brass Classic Lead rounds, which contain a heavy charge of 11/4 ounces of No. 71/2s. All are certainly capable of downing relatively fragile doves, but with double-barrels, it’s nice to load the light Estate shotshells in one barrel and a stouter load in the other, and select the round best suited for the shot presented. Easy incoming shots get the light load, and produce lighter recoil; the harder shots get the more powerful charge.

We have learned through hard experience that having only two barrels isn’t necessarily a disadvantage in the dove fields. Most of the time, when we shoot a third shot at a disappearing dove, it’s usually a miss. And even when we make the miracle shot, the bird often falls in brush or grass so far away that it makes marking it difficult, and we wind up losing it anyway.

But would these inexpensive double-barrels help or hinder our efforts at bagging a limit? Here’s what we found:

This is a boxlock-actioned shotgun with monoblock construction, machined-steel receiver, and hammer-forged barrels. It is available in 12, 16, 20, and 28 gauges, and .410 bore. The IZH43 has a checkered wood stock and forend, nonglare rib, automatic tang safety, and extractors. Other 12- and 20-gauge Bounty Hunters include internal choke tubes, but our test gun had fixed Modified and Full chokes. The gun had double triggers, with the rear trigger firing the left barrel.

It weighed 7.25 pounds unloaded, and had a 44.5-inch overall length. With the two triggers, there were two lengths of pull: 13.25 inches for the rear trigger and 14.25 inches for the front trigger. Drop at the comb was 1.5 inches, and drop at the heel was 2.5 inches.

The stock appeared to be walnut, and the buttplate seemed to be a wood-tinted plastic. The stock was checkered at the grip and on the splinter forend. Swivels were included on the buttstock and underneath the rib about midway up the barrels. An automatic tang safety reset every time the gun was opened—a good feature on a hunting gun. To bring the safety to the Fire position, the shooter simply slid the lever forward, revealing a dimly painted red dot.

Our inspection of the gun revealed adequate mechanical work. The engraved receiver was smooth on the side and fit tightly at the breech. Initially, the gun locked and unlocked with some effort, but as we shot it the action loosened up somewhat.

The blueing and woodwork were likewise satisfactory. We didn’t notice any glaring metal problems, and the matte wood finish accented decent wood grain. The nonglare rib was a welcome contrast to the shiny tops of the barrels, and we liked the combination of the 10mm-wide rib and tiny gold bead at the muzzle. They offered an unusually clean sighting system, and the height of the comb allowed us to see flat down the rib when mounting the gun.

Weight isn’t so much an issue with a gun we might use primarily for dove hunting, but we nonetheless appreciated the built-in swivels. That feature alone marks this gun as a working product, not a show product.

At the range, we were pleasantly surprised at the Bounty Hunter’s handling. The heavy weight of the barrels aided proper follow-through on crossing targets, and the 7-pound heft of the gun dampened recoil quite a bit. Is this a gun we would use for snap-shooting at grouse? No. But for open-field or tank work, it did the job fine.

Still, we had some criticisms of the Baikal. The fairly short splinter forend guaranteed that some shooters had to touch the barrels when shooting, which means using a glove on the lead hand. Combining heat from the combustion of shotshells and summer sun makes the metal hot to the touch. Also, we didn’t like the triggers at all. It required a conscious effort to make both of them break at 10+ pounds, and the rearward pull on the back trigger was horribly long and creepy. The plastic buttplate wasn’t too comfortable either. If you missed placing the stock just right, the sharp heel of the buttplate would dig into your shoulder. Some might question not having shell ejectors, but we weren’t bothered too much by that. Extractors pulled the hulls loose from the chambers, allowing us to pluck them from the bores. We’ve found it’s easier to collect shells this way than jacking them out of the gun and then having to pick them up.

The Brittany is distributed by North Kansas City, Missouri-based Tristar Sporting Arms. It comes with three choke tubes (Improved Cylinder, Modified, and Full), a single selective trigger, ejectors, a rubber recoil pad, an engraved receiver, and a checkered walnut English-style grip. Like the Baikal, this is a boxlock with a steel receiver. But the Brittany’s receiver is case-colored and the engraving is more elaborate. Also, engraving appears on the barrels and trigger guard.

The Brittany’s checkering on the straight grip and forend was more extensive than the Baikal’s, with the checkering running two-thirds of the way down the buttstock. It was nice looking overall, but some of the edges were broken.

The safety was located on the tang, and pushing the switch indicator to the left selected the bottom barrel to fire first. Pushing the button forward put the safety in the Fire position. Everything worked as it should have.

The walnut stock was backed by a soft-rubber buttplate. Swivels weren’t included. The receiver’s cosmetics were nicely done, and the metal fit was tight at the breech. We thought the Brittany was smoother locking and unlocking than the Baikal. We believed the blueing and other metal finishing were fine, and the matte finish was better filled on the Tristar gun. The nonglare rib, which was 9mm wide, was lined instead of checkered like on the Baikal. We preferred the Baikal’s treatment, probably because the glare off the Brittany’s glossy barrels was distracting. The Tristar gun also had a single gold bead near the muzzle.

We think we had more sighting problems with the Brittany due, in part, to the straight grip. Most of our shooters are accustomed to pistol grips, and adapting to the different stock shape posed problems for some of us. To get the trigger finger comfortably on the trigger, some shooters had to roll the hand clockwise on the grip to keep the wrist straight and comfortable. This tended to loosen the shooter’s grip on the gun.

At the range, the Brittany handled faster than the heavier Baikal, we thought, but we weren’t as comfortable shooting it, probably due to the grip. However, the Tristar gun’s trigger breaks were much better, going off at 4.5 pounds on the left barrel and 3.25 pounds on the right. These triggers also lacked the terrible takeup we noted on the Baikal’s triggers. Additionally, the soft-rubber buttplate on the Brittany was much more comfortable than the Baikal’s plastic plate.

Baikal IZH43 Bounty Hunter II Basic 180028 12 Gauge, $190. Buy It. This is a lot of gun for the money. Sure, it’s rough in places (the triggers in our gun badly needed work), and we would add a thin rubber buttpad. But for a dedicated hunting gun, this would not be a bad choice.

American Arms Brittany Side x Side 12 Gauge, $450. Conditional Buy. There was nothing overtly wrong with the Brittany; in fact, it was a fairly well finished, functional shotgun. However, we wouldn’t buy the gun if we didn’t already have a preference for straight grips. 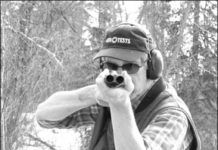