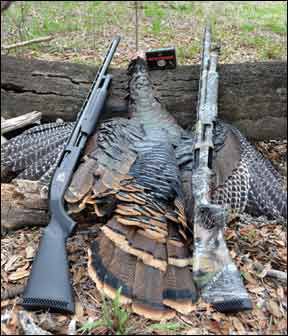 For many turkey hunters, getting their hands on the right gear is almost as important as getting into the game of gotcha with a big tom. If the hunters think a new camouflage pattern, a different style of call, or an updated version of their favorite smoke pole will give them the edge over a wary tom turkey, they are all for adding the new piece of gear to their hunting ensemble.

One of the recent innovations catching the eye of more than a few hunters are shotguns featuring thumbhole stocks. This stock design lets the shooter place his or her thumb through the stock rather than wrap it over the grip, as rifle shooters have found. For scattergun enthusiasts, the concept is fairly recent and has received a relatively modest reaction.

We decided to check out two models of O.F. Mossberg and Sons Inc. turkey shotguns, one with a standard stock and one with a thumbhole stock, to see if there was a difference in performance and handling between the two popular turkey tools.

The two shotguns in our test were the Mossberg Model 500 No. 55216 Turkey THUG 12 Gauge with a suggested retail price of $409 and the Mossberg Model 500 Mossy Oak Break Up Synthetic Thumbhole Turkey pump-action 12 gauge with a suggested retail price of $493. According to Linda Powell, director of media relations for Mossberg, the thumbhole stocks are popular with steady sales, but make up a relatively small percentage of the many thousands of shotguns the company sells each year.

The various versions of standard, black synthetic, camouflage and other models of Mossberg pump-action shotguns are among the most popular firearms found in the hands of hunters across the country. It came as no surprise that the two models we put to the test lived up to the pump’s reputation as a dependable and easily handling shooting tool.

As part of our handling and performance examination of the standard versus thumbhole stock, we selected several different types of popular shotgun ammunition. On the patterning board range, we used three different sizes of shot — Nos. 4, 5, and 6 — in 3-inch 1.75-ounce Winchester High Velocity Turkey Loads, all with an average muzzle velocity of 1300 fps. For overall handling and to test second- and third-shot capabilities, we switched to 2.75-inch Federal Game and Target shells loaded with 1 ounce of No. 7 1/2 shot, averaging 1290 fps at the muzzle. As noted in the comments below, recoil from the 3-inch shells in both shotguns was not particularly pleasing during the patterning tests. To reduce shoulder shock, lighter loads were brought into play for the multiple-shot review. Anyone who has spent much time touching off 3-inch shells at a patterning board can appreciate our decision. Here is our report:

This is the black synthetic version of a pump-action shotgun that has been a workhorse model produced by Mossberg since 1961. Millions of the Model 500s have been sold in a variety of versions, everything from standard blue receiver and hardwood stock to Parkerized or camouflaged finishes.

The simplicity of its action is one of the key features of the Model 500, and this black synthetic model lived up to the shotgun’s reputation. We were impressed with the smooth handling and reliable functioning right out of the box. Sporting a 24-inch barrel, this model was a little longer than the camouflage counterpart, with an overall length of 43.75 inches and a length of pull of 14.25 inches. The standard stock featured a drop at the comb of 1.5 inches and a drop at the heel of 2.25 inches, providing a good fit for most shooters.

Like all Mossberg turkey models, this shotgun barrel was topped with windage- and elevation-adjustable fiber-optic sights, plus a receiver that had been drilled and tapped for installation of a scope base. In addition, we liked the ambidextrous safety on the rear of the receiver. This safety could be quickly accessed in the standard stock model because the shooter’s thumb is just below it as the shotgun is gripped with either hand.

Another surprise came when we checked out the trigger pull of the standard shotgun. Featuring a Lightning Pump Action adjustable trigger, the factory setting out of the box was 3 pounds. This is the lightest setting on the LPA and makes touching off a shot a very pleasant experience with reduced chance for flinching. Most factory-set trigger pulls are in the range of 5 to 7 pounds, which can cause flinching or moving the barrel off target in anticipation of discharge of the round. While this is more important when rifle shooting, a smooth, light pull with a shotgun can help produce better target hits.

Even with the ported barrel designed to reduce recoil, firing the 6.5-pound shotgun with 3-inch ammunition was not shoulder numbing, but was not what we would call pleasant. Shooters just have to accept the fact that turkey shotguns are normally only put into play for one or two shots, so heavy recoil is just a factor that has to be accepted.

The performance of the standard model featuring an extended XX-Full Turkey choke (limited to lead shot only) on the Birchwood Casey Shoot-N-C 12-inch by 12-inch Turkey Vital Targets at 40 yards was impressive. On average, the shotgun produced 13 hits in head and neck vital areas of the target with No. 4 shot; 26 hits in the same area with No. 5 shot; and 35 hits with No. 6 shot. Only hits that would have produced a dead or mortally wounded bird were counted. The pattern with all three shot sizes was consistently centered on the target when shooting from a bench rest.

Both the standard model and the thumbhole model, as noted below, seemed to perform best with No. 5 shot in producing a tight, killing pattern. It is suggested that shotgun shooters test several different loads in their shotgun to determine which shell performs best in an individual firearm.

Moving to the second- and third-shot tests — sometimes required if a bird is missed or not hit well in the first shot — we found that the standard model performed flawlessly. Using the lighter Federal loads, the second and third shots were quick and smooth, and on-target hits were the rule and not the exception. The recoil of the shotgun set the pump action in motion to chamber another round, and sight acquisition down the barrel after the first or second shot was easy to accomplish.

Our Team Said: Several factors allowed us to give a slight edge to the standard model Mossberg turkey shotgun over its thumbhole stock counterpart. First was the ease of handling, particularly in second- or third-shot situations. Second was a very pleasing trigger pull with the adjustable trigger. And finally there was the price. At just over $400, this shotgun would be a good choice for anyone wanting to match hunting skills against the popular game bird.

About five years ago, Mossberg decided to offer a thumbhole stock version of the popular turkey shotgun models to hunters looking for an edge to improve their turkey hunting experience. The version that we put to the test is a fine example of modern technology that reinforces the theory a firm grip can produce a steady, accurate shot whether the firearm is a rifle or shotgun.

Admittedly, some of the veteran wing-shooters in our test group required a little adjustment time to get familiar with the thumbhole concept, but quickly adapted to the new feel and handling factors of the firearm. This shotgun is not designed to swing through a target flying through the air, but is set up to provide a secure and stable shooting platform for accurate and effective first shots on a standing or walking turkey.

Fitting the bill as a short, easy-to-maneuver brush gun, the camouflage Mossberg is only 39.75 inches long, with a 20-inch barrel and a 14.25-inch length of pull. The drop at the comb is 1 inch, and the drop at the heel is 2.5 inches.

As noted, with a little adjustment time our test team became comfortable handling and shooting the thumbhole-stock version. It does not handle with the ease and smooth-as-glass flow of a high-dollar wing-shooting or clay-target model, but it does provide a stable and steady shooting platform for which it was designed.

Weighing in at just 5.5 pounds, the shotgun is lighter and slightly easier to carry than the standard version in our testing. However, when matched with the 6-pound trigger pull — slightly heavier than we would like on a shotgun — we found that as expected, recoil would be a factor on the range. On the plus side, the model did come equipped with a ported Accu-Choke in XX-Full that seemed to help reduce recoil. But the shell-firing shock from the short, light shotgun, particularly in the right hand holding the thumbhole stock, certainly got our attention. We would recommend limiting range time for patterning purposes to a minimum with this shotgun.

We were pleased with the patterning performance of the shotgun, which like the standard model seemed to perform better with No. 5 shot than the other loads. The average number of vital area hits on the Shoot-N-C targets at 40 yards was 11 with No. 4 shot; 46 with No. 5 shot, and 31 with No. 6 shot. Also like the standard model, all the patterns were centered on the targets and were in the acceptable range for putting down a big tom.

One of the downsides of the thumbhole stock version, in addition to the higher recoil, involved handling. Unlike with the standard stock, engaging the safety on the rear of the receiver was a more complicated process when holding the thumbhole stock. The shooter must remove his or her thumb from the hole to reach the safety. It is an easy process, but not as smooth as operation as with the standard stock.

The action-release button on the left side of the trigger guard on both models could be accessed with the same ease. It should be noted that the design of the thumbhole stock restricts the use of the shotgun to right-handed shooters. Because of the grip and Monte Carlo-style comb, lefties are out of luck with this version of the Model 500.

In the multiple-shot tests using the lighter Federal loads, the thumbhole-stock shotgun was clearly not as smooth and fast to operate as the standard model. While only slightly slower to bring to bear on a second or third target, the thumbhole stock was second best in the follow-up shot category.

As a side note, while camouflage versions of Mossberg turkey shotguns are a hot ticket item, wildlife biologists do not believe shotgun color makes a major difference in hunter success. While turkeys can see versions of red, blue, and white, their finely tuned vision will alert them to danger more often from hunter shotgun movement than whether the firearm is blue, black or camouflage. That said, the camouflage version we tested was favored for its looks over the black standard model.

Our Team Said: First-shot performance and providing a steady and stable shooting platform were the main plus points for the thumbhole-stock version of the Mossberg Model 500. We have a concern about safety access and follow-up shot performance, but neither factor would be a deal breaker. We also had a slight problem with a price tag of the thumbhole stock that was nearly $90 more than the standard black version.