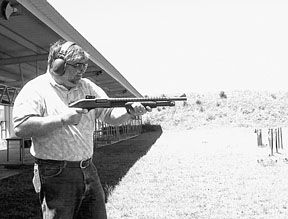 Of the millions of shotgun shells fired each year, rifled slugs and different sizes of buckshot loads make up only a small percentage of the ammunition put to use by scattergun enthusiasts. But for the self-defense user, these loads are crucial elements of the home-safety system. Used in the right shotgun, they offer power, repeatability, and control.

We recently tested a series of shotgun shells in a Norinco Hawk Model 98 pump-action 12 gauge, a short-barreled self-defense gun perfect for commanding a hallway or clearing out a household of uninvited guests.

We are happy to report that all of the ammunition functioned in a proper manner, with our testers noting that some of the shells with paper cases produced quite a bit more smoke and debris when fired through the test gun.

Water-filled jugs, large cans of tomato soup, heads of cabbage and paper bull’s eyes were all targets that our group put to good use. Naturally, the session was conducted in a safe area and the range was thoroughly policed of all trash at the end of the shooting tests.

Our test gun was an inexpensive Chinese-made 12-gauge pump, whose handling and function we’ll cover first, because the gun can vastly affect the perception of how the rounds performed. Then we’ll report the blow-by-blow results of the ammo shootoff:

[PDFCAP(1)]
As noted in earlier GunTest reviews, short-barreled shotguns, especially pump-actions, are a well-respected and highly popular choice as a close-range weapon. Quick to bring to bear on a target and packing a deadly punch, these shotguns rank at the top of the scale in the list of self-defense firearms in a close-range arsenal.

One of the firearms falling into this category is the Norinco Hawk Model 98 pump-action No. 0031615, imported from China by Intrastate Arms Corp. of Billerica, Maine. With a price tag of this import falling under $250, the firearm doesn’t put much of a dent in the average shooter’s gun-buying budget.

Factoring in its low production cost and accompanying lack of personal gunsmithing attention, the Norinco has the feel and handling ability surprisingly close to its higher priced counterparts. The shotgun manufacturer appears to have copied features from Remington, Winchester, Mossberg and others in producing a low-end version of a self-defense firearm. A Remington-style magazine cap, Winchester-style forearm and Mossberg-style heat shield (although the Norinco version is plastic) were just a few of the observations by our test group.

Typical of many self-defense shotguns, our test gun was a compact 38.75 inches in overall length with an 18.5-inch barrel. The sighting system featured an adjustable ghost ring peep sight in the rear and a large ramp and post front sight. Painting the front sight post in either white or red would be recommended for better visibility.

The unloaded weight of the shotgun was 6.25 pounds, probably one of the reasons for the unpleasant recoil with heavy shot shell loads. The LOP on the test gun was 14.0 inches, a little short for some of our test group, but not enough to cause any handling problems. The drop at the comb was 1.5 inches and drop at the heel was 1.75 inches.

While imitation is the highest form of flattery, unfortunately for the Norinco, shooting results are also a big factor in how well a firearm is judged.

As a side benefit to purchasing the Chinese import, buyers receive an owner’s manual that is in English, but uses phases not quite the same as those familiar to U.S. natives.

For example, the disassembled shotgun is called “dismounted.” A safety message included under the heading “The not so obvious” states: “Shoot only when you are bright, alert and fit. If you are tired, sleepy, boozy or distracted, you will not perform up to the standards of your gun: forget shooting and come back another day.”

Our test group of shooters, who were not tired, sleepy, boozy or distracted, collected a variety of ammunition to try out the shooting ability of the Norinco.

Compact and pleasing to the eye at first glance, this low-end shotgun has the feel and balance of its higher priced counterparts. The action, while not as smooth as glass, does function reasonably well and the weight of the shotgun is well distributed.

Concerns about the light weight of the shotgun compounding the recoil with heavy loads as the firearm was first examined were substantiated on the shooting range.

Recoil ranged from uncomfortable to “rock your world” when the full-length stock was attached to the shotgun. With the pistol grip in place, the jar from each shot smacked the shooter’s palm like a blow from a baseball bat.

Because of the recoil, control of the shotgun was difficult in speed-firing conditions. During several attempts to fire three or more rounds in rapid succession, empty hulls failed to properly eject. Using lighter loads and adding weight to the stock are a couple of possible solutions to the recoil problem.

Three-shot groups of the various slugs [PDFCAP(2)] were all unimpressive. All were very low (as much as 20 inches under the center of the target at 50 yards) and no adjustment of the peep sight provided any substantial improvement. Slug loads fired at ranges as close as seven yards also hit as much as six inches low. This was very disappointing for the shooters who liked the looks of the ghost ring. Patterns with the buck shot were still low on the target, but were not as disappointing. Each of the buck shot loads produced one to three pellets in the 10-inch center of the target, with patterns ranging from 18 to 24 inches.

The shotgun was fired from a bench rest, standing with the firearm shouldered and from the hip to test its handling ability in various shooting situations. In addition, the optional pistol grip that is included with the package was utilized for some unshouldered shots.

The pistol grip on the full-length composite stock of the test gun was checkered to provide a non-slip grip, but seemed a little thin for some of the larger members in our test group. The thin grip would be a plus for women or youngsters who normally have smaller hands.

Ammunition Results
The Federal 2.75-inch 1-ounce Hollow Point Rifled Slugs generated muzzle velocities of 1,610 fps and managed average three-shot group sizes of 5 inches at 25 yards. We thought recoil from this round was moderate to heavy, and we noted minor jamming malfunctions. Also, several shells failed to eject properly. Of note: This round provided the closest group to the bull’s eye of all the test slugs, with all hits at 9 o’clock about seven inches from the 10 ring.

The Remington Slugger 2.75-inch 1-ounce Hollow Point Rifled Slugs had muzzle velocities of 1,560 fps and shot 4-inch groups at 25 yards. We thought recoil was moderate to heavy. We encountered no malfunctions. Other Remarks: All hits at 25 yards were 10 inches low, although the performance could have been due to the firearm. Function was the smoothest of all test loads.

Winchester’s Super X 2.75-inch 1-ounce Hollow Point Rifled Slugs left the muzzle at 1,600 fps and shot 4-inch groups at 25 yards. We gauged recoil from these shells to be moderate to heavy. We had no malfunctions with the round. Other Comments: Although the group was 9 inches low, consistent patterns and ease of handling gave these shells high marks.

Among our shotshell samples, the Remington Express Magnum 2.75-inch No. 00 Buck had nine pellets in the cup. They left the muzzle at 1,225 fps. They shot group sizes of 20 inches at 25 yards, with two pellets in a 10-inch bull’s eye. We thought recoil was excessive. We had no malfunctions. Remarks: Nice overall pattern, but recoil was in the “rock your world” category.

The Winchester Super X 2.75-inch No. 4 Buck contained 27 pellets that had a muzzle velocity of 1,325 fps. They produced a 24-inch group at 25 yards, with five pellets in a 10-inch bull’s eye. We gauged this round’s recoil as comfortable to shoot. We had no malfunctions. Comments: This round was fun to shoot and offered a solid patterning performance.

The Winchester Super X 2.75-inch No. 00 Buck pellets (nine of them) left the muzzle at 1,325 fps. They shot 18-inch groups at 25 yards, with two pellets in a 10-inch bull’s eye. They were comfortable to shoot in terms of recoil, and caused no malfunctions. Remarks: Also on the low end of the recoil range, these rounds were pleasant to shoot with acceptable patterning performance.

Gun Tests Recommends
Norinco Hawk Model 98 pump-action 12 gauge, No. 0031615, $234. Conditional Buy. A plain, basic, low-dollar tool, this shotgun’s price tag is one of its best features. As long as the shooter doesn’t mind putting up with excessive recoil from some loads, this firearm could perform acceptable duty as a self-defense weapon.

Federal 2.75-inch 1-ounce Hollow Point Rifled Slugs. Don’t Buy. Moderate to heavy recoil and some jamming and ejection problems would make us pass on this one when shot in the Hawk.

Remington Slugger 2.75-inch 1-ounce Hollow Point Rifled Slugs. Conditional Buy. No malfs, smooth function, but low slug impacts at 25 yards. Of course, some of this must be laid at the feet of the gun.

Winchester’s Super X 2.75-inch 1-ounce Hollow Point Rifled Slugs. Buy It. Good groups (not quite as low as the Sluggers) and otherwise acceptable performance gives this round the nod.

Winchester Super X 2.75-inch No. 00 Buck. Buy It. Good groups, comfortable to shoot, and no malfunctions.