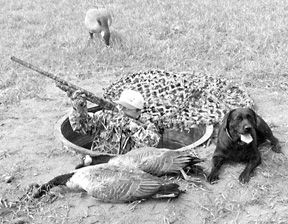 The pump is the quintessential American shotgun. It’s the one in the window of the pickup truck, behind the door in the farmhouse, on board the boat, and on the shelves at mass-merchandising retail shops across the land. It was the pumpgun’s simplicity and reliability that made it the darling of American trench soldiers before and during the first World War.

The pump was also the fearsome vehicle that facilitated the worldwide prohibition of shotguns and buckshot in warfare—a ruling that American armies continued to ignore as the Remington, Ithaca, Winchester, and Mossberg pumps saw plenty of face-to-face combat in World War II, Korea, and Vietnam. The pump first gained fame among the general populace shortly before World War I, when the prospering American economy began to afford more and more workers disposable income, but not in sufficient amount to afford double guns and early autoloaders. The alternatives were single-shots and pumpguns, the latter gaining popularity as an affordable and simple multi-shot firearm.

Bird hunters, particularly waterfowlers, like pumps because of their lack of heft and ability to take a beating and perform under adverse weather conditions. The 1930s was the dawn of the age of pump shotguns, and it continues today with Remington and Mossberg each selling more than a million pumps annually. Even among pumpguns, however, there’s price stratification, with many units running under $250, and a handful climbing to twice that MSRP. We recently tested two of the higher-priced pumps on the market, the Mossberg 835 ($571 suggested retail) and Ithaca Gun’s M-37 Waterfowler ($595 MSRP, all prices from Gun Digest 2001). The Mossberg was similar in some respects to the specialized turkey gun we tested in the April 2001 issue.

The guns were compared for finish, fit, feel and package-for-the-price, then were taken to the range for an extensive shakedown using 3-inch (also 3.5-inch steel in the Mossberg 835) steel, tungsten-iron, and bismuth goose loads (No. 2s and BB). Each gun and load’s performance was chronicled on a PACT System II chronograph (average velocity of 10 shots with each load in each gun), and they were patterned at 20-, 30-, and 40 yards on Federal steel-shot patterning targets. The 20- and 30-yard patterning was done to judge pattern formation, while the 40-yarder was a check-the-pellet-count test. We again averaged 10 patterns at that distance to show typical distribution.

In our view, the guns acquitted themselves well in various aspects of the tests, and one failed miserably in other aspects. We like the Ithaca M-37 Waterfowler better than the Mossberg, for reasons we outline in the text below.

The gun measured 44.5 inches and weighed 7 pounds 4 ounces unloaded. The magazine held five 3-inch magnum shells or four 3.5-inchers with another in the chamber. The stock was straight with a 1.25-inch drop at the comb and only 1.75 inches of drop at the heel. This design is used, we think, to better direct the brutal recoil doled out by 3.5-inch 12-gauge loads. The safety was a thumb-slide type located just under the sighting plane on the rear of the receiver. Length of pull was the norm at 14 inches.

Based on heft, feel, and stockweld to the cheek and barrel, we felt the gun had a world of potential, but the unit we tested performed miserably. The trigger broke at just under 5 pounds but had an excruciating amount of creep. The choke system’s threads were apparently crooked, since the chokes didn’t align with the bore and consistently shot 2 inches left at 20 yards and significantly farther off line at 40 yards. To get countable patterns at 30 and 40 yards, we had to hold at the right side of the 30-inch-wide patterning board. The patterns, when discernible, were concentric and evenly distributed, a tribute to the Mossberg’s backbored (nearly 10-gauge internal dimension) barrel design.

The gun failed to cycle three times, very unusual in a pump gun. Recoil from the 3-inch shells was acceptable, the punishment doled out by the 3.5-inch loads was a couple of clicks past excessive. We are simply not sold on stuffing what used to be an 8-gauge shot and powder charge in a 12-gauge barrel.

Ithaca M-37 Waterfowler
Essentially the company’s popular Turkeyslayer with a different choke-tube system, the gun we tested wore Realtree livery, though Mossy Oak’s Shadow Grass might better match swampy environs. Long the favorite of left handers because of the gun’s bottom ejection, they resemble the Browning BPS pumps in the feature.

The stock, receiver, and operating mechanism are virtually the same as when the John Browning-designed pumpgun was introduced in 1937. Its chambers have been lengthened and extractors subsequently changed, and the new M-37s come with birch stocks rather than walnut. Still, this gun is remarkably similar to its 60-year-old forebear.

The Model 37 was actually a pickup of the discarded Remington Model 17 bottom-ejection design that Browning sold to the Ilion, New York-based arms maker shortly after World War I. Stories differ, but a Remington buff at the company’s museum told us that Remington gave Ithaca Gun the design to head off potential monopoly charges. Books on Ithaca Gun history, however, say that Model 37s were clandestinely designed and manufactured in 1936 and held for release until Remington’s patent ran out.

The M-37 Waterfowler we tested was 46 inches long, 26 inches of which was vent rib barrel. It weighed 7 pounds 6 ounces and came with three Winchoke-thread choke tubes. The Waterfowler, like the M-37 Turkeyslayer, offers a barrel with significantly longer forcing cones at both ends—a simple, yet effective, alternative to backboring that enhances patterns and lessens recoil.

The Ithaca’s trigger broke crisply at 4.5 pounds, and its push-button safety was located in front of the trigger in the trigger guard housing. The M-37 had the most pitch of the two stocks tested, dropping 1.25 inches at the comb and nearly 2.75 inches at the heel, which caused considerable barrel jump.

The wooden stock was built around a hand-filling pistol grip and offered a very comfortable cheekweld. The half-inch recoil pad (on a quarter-inch spacer) could have been thicker on the hard-kicking design, but it is probably kept thin in deference to the gun’s already long 14.5-inch length of pull.

Though we liked the lines of the Mossberg better and preferred the Mossberg’s full-grip forearm to Ithaca’s “corncob” style, the Ithaca threw an excellent pattern with each load and performed flawlessly throughout testing and field use.

Gun Tests Recommends
Ithaca M-37 Waterfowler, $595. Buy It. Despite its hefty MSRP, (the M-37 specials often sell for $450) and goofy forearm, the Ithaca M-37 Waterfowler patterned well and had a good trigger. Also, it pointed well and showed no functioning problems. We’d rate it superior to the Mossberg for the upcoming waterfowl hunting seasons.

Mossberg 835 Ultra-Mag, $571. Don’t Buy. It simply did not perform well, in our judgment. We thought the trigger was poor, and the ejection system proved unreliable in our testing. Also, while the backbored barrel threw impressive patterns, the fact that our sample shot crooked is a fatal flaw for a waterfowling gun. 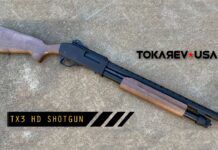 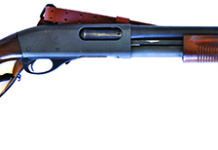