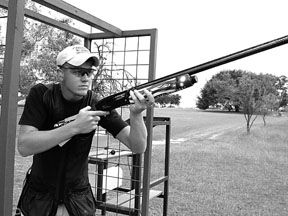 While training, physical ability and desire are major factors in developing a winning combination in sporting clays combination, using the right tool at the right time is also a big element in the equation. If we move past the debate between “two-holers” and “single-barrel shooters” to the subject of semiautomatics, a couple of the most popular shotguns finding favor with competitors are the Browning Gold Sporting and the Beretta AL 391 Urika.

The two shotguns are both gas operated, designed to reduce recoil while providing a smooth system of automatically loading the firearm to make it ready to fire. Because of this system that utilizes the high-pressure gas produced from firing the ammunition to operate the firearm, the down side is that the shooter’s gun-cleaning duties are a bigger factor than if an over and under or side-by-side were used.

Both of the semi-autos, and their more elaborate, higher-priced cousins, can be found at about any sporting clay competition in the country and are often the tools of the trade for top competitors.

At the end of the 2003 National Sporting Clays Association National Championship, the largest sporting clays competition ever held in the United States, the Browning Gold Sporting was the shotgun used by both National Champion Cory Kruse and National Ladies Champion DeeAnn Massey.

However, many original owners of the Brownings, including some of the top competitors, turned to Beretta or other shotguns after the Gold Sporting developed a reputation of mechanical problems such as broken firing pins. After a flurry of research and development activity by their factory gunsmiths, Browning officials are assuring potential customers that the problem has been corrected.

[PDFCAP(1)]This series is made in Belgium, assembled in Portugal and distributed by Browning USA. It is an out-of-the-box shooting pleasure. When this shotgun first entered the sporting clays scene several years ago, the most common observation was about how well the shotgun pointed and handled. Our test group agreed with this assessment.

Like the Remington 1100 semi-automatic that took the skeet shooting community by storm, the Browning Gold Sporting was a “must-have” for many sporting clays shooters and is still one of the most commonly seen shotguns on the clay target courses.

Our test firearm was the latest version of the shotgun to be marketed by Browning. Two of the latest features are a shim adjustable stock that allows the comb to be raised or lowered up to 1/8 inch; and two separate gas pistons to be used depending upon whether the shooter is using shot charges of 1 ounce or less, or heavier loads of 1 1/8 ounce or greater.

Both options were appreciated by our test group, although the fit and function of the shotgun right out of the box was acceptable for our shooters.

The Browning test gun was 48.5 inches in overall length, with a 28-inch factory-ported barrel and a length of pull of 14.5 inches. Weighing 7 pounds 10 ounces, the shotgun was surprisingly well balanced, in addition to pointing well for all members of our group. It is rare that this good feel and good pointing ability can be found in any out-of-the-box shotgun.

The drop at the comb was 1.5 inches, with the drop at the heel of 1.75 inches providing a very straight stock. The trigger pull was slightly heavy at 6 pounds, but did not cause any major problems in our shooting tests.

Recoil from all loads was within the acceptable range for our test group. The speed-loading function that automatically feeds a shell into the open chamber when it is loaded into the magazine found particular favor with our group after several boxes of ammunition were put into play.

For our use, the chartreuse-colored light pipe of the HiViz Pro-Comp sight offered the best focal point on the sporting clays course. Also utilizing the center sight bead on top of the tapered, ventilated rib, the pointing ability of the shotgun received very high marks.

The oversized, cross-bolt safety on the back of the trigger guard (which can be reversed by a gunsmith for left-handed use) was very easy to operate.

Only one malfunction was experienced during our shooting sessions of several hundred rounds, with one of the Remington No. 8 shot loads failing to eject properly.

Overall, the Browning handled and performed like a champion tool, capable of providing excellent service to both top shooters and those who just want to have a little fun.

[PDFCAP(2)]This gun is made in Italy and is distributed by Beretta U.S.A. In our view, it comes to the shooter’s shoulder with a slightly heavier feel than the Browning.

This heft and slightly thicker forearm and grip have ties to the firearm’s European roots. Shooters in Italy seem to favor a meatier firearm than their United States counterparts, and those features are clearly evident in this shotgun.

Our test gun measured 49.0 inches in overall length with a 28-inch barrel and a length of pull of 14.25 inches. The drop at the comb was 1.75 inches and the drop at the heel was 2.0 inches, providing a comfortable feel for all the members of our test group.

The rubber recoil pad on the Beretta (a spare is included in the package) provided a solid, non-slip foundation in the shoulders of all of our shooters.

To allow the shotgun to be adjusted for individual shooting preference by any knowledgeable gun fitter, stock drop and cast spacers are included with the shotgun. These features are a very big plus for someone who does not fit the “average” size of the shooting population. This was a nice touch very much appreciated by our test group.

The trigger pull of the Beretta was a crisp 5 pounds, well within the range of both safe and acceptable. Like the Browning, only one malfunction was experienced during our test sessions with a single Remington No. 8 shell failing to eject properly. Other than that one round, several hundred shells were fired with flawless performance.

The cross-bolt safety on the Beretta, also reversible by a gunsmith for left-handed shooters, is on the front of the receiver and offers easy access to the trigger finger.

While there is no speed-loading option on the Beretta, the shotgun does feature a magazine cut-off control on the left side of the receiver. When engaged, the cut-off prevents shells from being fed from the magazine when a round is fired, giving the shooter the option of using the firearm as a single-shot.

Because of its slightly heavier weight and feel, the Beretta was just a little slower on the target for our test group. However, the ability to swing through hard-crossing targets was enhanced by the shotgun’s weight.

On the downside, the more technologically minded Beretta was harder for all of our testers to reassemble than the Browning after the firearms were taken apart for cleaning. Several attempts were required to arrange the bolt and operating rod in the proper manner for the connecting rod to compress the recoil spring.

Other than this minor problem, which would be reduced or eliminated after the shooter becomes more familiar with the Beretta’s operation, the shotgun received high marks from our test group.

Gun Tests Recommends
Browning Gold Sporting 12 Gauge, $1,105. Our Pick. Both the tool of champions and a very fine out-of-the-box firearm that fits and points well for the average shooter, this shotgun edged out the competition as our tester’s choice as a top sporting clays gun.

Beretta AL 391 Urika 12 Gauge, $1,070. Buy It. Just a little bulkier than the Browning and a little more complicated to reassemble after cleaning, this shotgun is still an excellent tool for shooters who want to break their fair share of targets.