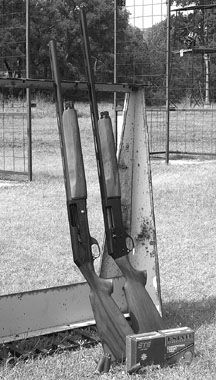 Many all-around hunters like to keep a “user” shotgun in their collection to handle situations where rough and tumble conditions may not be favorable for a fine fowling piece. As a veteran shotgunner once said of his well-worn scattergun: “She might not be the prettiest gal at the ball, but she’ll keep you dancing.”

An inexpensive, all-purpose shotgun can be a useful tool. Whether you hang it on a gun rack in the back window of your pick-up truck (unloaded please) or store it at the hunting lodge to help the cook keep meat in the stew pot, you don’t want anything too fancy.

Falling into that “user” category are two semi-automatics — an ADCO Diamond GE manufactured in Turkey and a MK Conquest Model 901 from Germany — we recently put through a shooting test both in the field and on some Five-Stand clay targets. Both shotguns carry a MFRP of under $500 and each featured 3-inch chambers that provide versatility in a variety of wingshooting conditions.

The concept behind extending the firearms’ chambers beyond the normal 2.75 inches for standard length shotgun shells was developed to increase the tools of today’s modern shotgunner. Waterfowl and turkeys are just two of the bird species that can send a hunter looking for 3-inch loads. The bigger birds often require more knockdown delivered by the longer shells, which allow for extra powder and shot.

Unfortunately, that extra power can deliver a punch at both ends of the shotgun, as happened to our test shooters with the Conquest semi-auto, available from MKV of Germany, www.mk-v.de, imported by EMF, www.emf-company.com.

The Model 901, listing for about $400, showed promise right out of the box with its heft and smoothness to the shoulder demonstrating the qualities of a higher-priced shotgun. The thin pistol grip and grooved forearm, both oil-finished walnut, and the light weight of the firearm were particularly pleasing.

As a sharp contrast, the $450 ADCO Diamond GE 12 gauge from ADCO Sales Inc., (781) 935-17999 or www.adcosales.com, was extremely muzzle heavy despite its short, 22-inch barrel and overall length of 43.75 inches. This shotgun has the balance of a weighted baseball bat, although the weight proved to be a benefit as actual shooting of the firearms was conducted.

To put the two shotguns through a good variety of loads, we conducted field tests in woods simulating turkey-hunting conditions; around a tank where waterfowl would have been the shooting fare; and at a Five-Stand course. The wood and tank shots demonstrated the shotgun’s ability to handle heavy loads and the Five-Stand offered a chance to run a box or two of ammunition through each firearm at a rapid pace to see how they would function.

[PDFCAP(1)]This shotgun was a teaser right out of the box. Smooth handling, with the comfortable feel of a thin pistol grip and grooved forearm had us looking forward to some fine field work. The shotgun assembled with relative ease, although the forearm remained loose no matter how hard we tried to tighten the forearm cap. The gas evacuation ring and spring just under the cap required unexpected pressure to start the cap on the forearm.

The butt pad is a combination of hard and soft rubber, with the hard-rubber top section designed to allow smooth mounting of the shotgun into the shooter’s shoulder. The solid pad did not provide much recoil relief and the hard rubber part was not rounded enough to perform as it should.

Our test gun measured 48.5 inches in overall length with a barrel 28.0 inches long, providing a very nice balance. The LOP measured 14.50 inches, a little long for your average shooter. Drop at the comb was 1.5 inches; drop at the heel was 3 inches. Combined with a light weight of 6.5 pounds and a very unusual pitch of 5.75 inches, this shotgun proved to be a shoulder shocker.

The first 3-inch shell touched off after a trigger pull of 5.5 pounds (with excessive creep) was a real eye-opener for our test shooters. Even the non-recoil-sensitive members of our group were surprised at the kick of the Conquest.

Maintaining a grip on the shotgun was surprisingly easy, with the hand checkering on the forearm and pistol grip providing good contact.

Though we did not have access to a patterning board, the five chokes that came with the shotgun appeared to handle the variety of ammunition in an acceptable manner. Shots fired into a tank demonstrated a killing shot string with the lighter loads and very few stray shots with the BBs. None of our shooters was interested in firing more than a couple of rounds with the 3-inch shells because of recoil.

One of the particular disappointments was how the shotgun handled the simple loading function. The bolt release is on the left side of the receiver, unlike most U.S. semi-autos with the release on the right side or underneath the receiver. Unless a shooter is very careful, there is a very real possibility of catching a finger or thumb in the action as the bolt is shut. Speed loading without practice would not be recommended.

During our field tests, the Conquest would jam and fail to feed or unload about every third round. Problems were encountered with both 3-inch and 2.75-inch shells. This problem was not encountered on the Five-Stand field, with the shotgun handling several boxes of light loads without a malfunction.

The 8mm flat channel ventilated rib and gold front bead provided an acceptable sighting ramp for both stationary shots in the field and at the Five-Stand clay targets. Both the trigger and the safety of the shotgun are also gold-plated.

The wood on the Conquest was plain, which is understandable for a low-end firearm. However, a strip of grain cutting across the bottom of the pistol grip of our test firearm may result in a split in the wood after excessive handling.

The overall light weight of the Conquest caused several of our testers, who are experienced Five-Stand competitors, to whip through targets rather than make solid hits. Topped by the uncomfortable recoil from even light loads, the Conquest was generally less than pleasurable to shoot.

[PDFCAP(2)]The wood on this semi-auto was a real attention grabber. The excellent grain and matte clear coat finish was striking for a “user” shotgun. One member of the field crew remarked: “This is $400 wood on a $450 shotgun.”

However, the barrel length of only 22 inches was a disappointment, in addition to the problem of extreme muzzle weight for such a short firearm. Because of the longer receiver on a semi-auto, the Diamond’s overall length of 43.75 inches was similar to an over/under with 26-inch barrels. But the balance of the firearm was similar to swinging a baseball bat — not good for longer wing shots or clay targets.

The length of pull was 14.50 inches, with a drop at the comb of 1.5 inches and drop at the heel of 3 inches. The trigger pull was 5 pounds, with creep, and the weight of the short-barreled shotgun was a surprising 7 pounds. The weight, plus less pitch of 4.75 inches, contributed to reduced recoil.

In putting the Diamond through the paces with the variety of shotgun shells, there were no malfunctions and shot strings from each of the three chokes provided with the test firearm were acceptable. As an added test, both the 3-inch and 2.75-inch shells were loaded in a variety of combinations, and the firearm handled all mixtures with ease.

After disassembling the action, it appears the firearm utilizes a trigger assembly similar to a Beretta semi-auto and a bolt and barrel connection similar to a Benelli. The bolt release is on the right side, just like a Beretta, and the firearm also features a carrier plunger button that must be depressed to lock back the bolt. For those field testers familiar with Berettas, loading and unloading the Diamond was a simple procedure.

Even with the short barrel, the heavier shotgun (7 pounds) was more pleasant to shoot than the Conquest. Less recoil was experienced from all the shells, partially because of the weight and also because of the thick rubber recoil pad. The shotgun could be mounted with ease and the pad provided a solid grip to hold the stock in the shooter’s shoulder.

During the field tests in the brush, the short barrel Diamond demonstrated a distinct advantage over the Conquest. Shots simulating turkey-hunting conditions, which are more like rifle shooting than wing shooting, and quick shots on rising quail can require a short-barrel shotgun.

Concerning the appearance of the metal on the Diamond, the matte finish on the barrel and receiver, which featured machine engraving, was attractive but seemed to lack durability. Even after the limited time our field testers handled the shotgun, there were a few noticeable small scratches on the receiver. A general-purpose shotgun should be expected to hold up well to anticipated abuse, and any kind of damage to the finish could lead to rust and corrosion.

Unlike the Conquest, the Diamond featured sling swivels on both the magazine cap and in the stock, allowing a shooter to “sling up” the firearm to carry it into the brush and bramble of general-purpose shooting situations. We did note that there were cracks in the wood where the swivel was mounted in the stock.

On the Five-Stand course, the short-barrel shotgun was at a distinct disadvantage to the Conquest. Close targets such as bouncing rabbits or quartering shots could be handled with concentration, but any target at a distance generally was in no danger. Function and handling the various loads was no problem, a plus over the jam-plagued Conquest.

Gun Tests Recommends
MKV Conquest Model 901 12 Gauge, $400. Don’t Buy. Even with the good initial feel of this shotgun, the downsides greatly outweigh any beneficial qualities. Excessive recoil because of its light weight and solid recoil pad, in addition to its 5.75-inch pitch, made this shotgun a questionable buy even at its low price.

ADCO Diamond GE 12 Gauge, $450. Conditional Buy. If you are looking for a “user” shotgun to keep at the camp or carry as a back up, this firearm could be counted on to meet your needs. It functions well, although wingshooting can be a chore because of its balance. On the plus side, the wood on the test shotgun was exceptional for an inexpensive firearm. We would suggest fitting the firearm with a longer 26- or 28-inch barrel to help smooth out its handling problems.