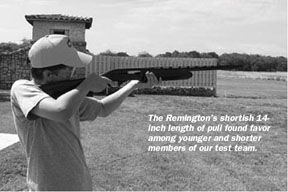 Looking at the market for semi-automatic 12-gauge shotguns with a price tag of under $1,000 can give shooters quite a variety of options.

Questions like Should I decide based on price or go for the pretty package? or How does the handling, balance and function of this model compare to the others? all seem to ?ow together. More often than not, the bottom line is often the bottom line – how the purchase hits the pocketbook.

We jumped into the issue with three semi-automatics that ranged in price from $435 to $907. The low-end model was the recently released Stoeger 2000; it was followed by another newcomer, the Franchi I-12 at $749; and the highest-dollar member of the trio, the veteran Remington 11-87 at $907.

Acknowledging that beauty is in the eye of the beholder, each of the models has its good points and bad points based on appearance. Some shooters prefer the wood and metal look of the Franchi and Remington, while others favor the spaceage features of the Stoeger.

One of the major surprises in checking out the three models right from the box was the very pleasing trigger pull of about 4 pounds for each shotgun. When an out-of-the-box shotgun arrives with a trigger pull of less than ?ve pounds (heavier trigger pulls are favored by most manufacturers for safety reasons), a new owner should put a check mark on the plus side of his ranking ledger. A lighter trigger means that the shooter can be smoother in the move, mount and shoot practice of engaging targets.

All three of the models also received favorable marks in their ease of assembly and disassembly for cleaning. Although the Remington is gas operated and the Franchi and Stoeger are ?xed-barrel inertia-recoil operated, all test models found favor during cleaning sessions.

On the handling side, we focused on smoothness to the target and how the shotguns allowed for ease in follow-through. Balance and ease of handling rank almost as high as reliability for most shooters.

Our test ammunition for the trio on the sporting clay argets was Winchester AA 2.75-inch 2.5-dram shells in both No. 8 and No. 7 1/2 shot. Both shells were 1 1/8-ounce loads, with an average muzzle velocity ranging from 1,100 to 1,145 fps. In addition, each of the shotguns was tested with a few Federal 3-inch 1 1/4-ounce steel BB shot loads with a muzzle velocity of 1,300 feet per second to check out recoil from heavy loads. Heres our test report:

Remington 11-87 Premier
12 gauge No. 25289, $907
Smooth to the target and easy to handle were among the ?rst comments as we put the Remington through its paces on a sporting clays course.

Featuring similar handling abilities of the veteran Remington 1100, this semiautomatic is on the heavy side, tipping the scales at 7.75 pounds. However, most of the weight of the shotgun is between the shooters hands, providing a very comfortable gun movement.

Combined with a short 14-inch length of pull, a drop at comb of 1.5 inches and a drop at heel of 2.25 inches, the Remington was particularly favored by the height-challenged members of our test team. Aftermarket stock adjustments are simple with the Remingtons standard wood stock.

Utilizing a time-tested gas-operated system, the Remington lived up to its reputation as a ?rearm that helps reduce recoil. Our test shotgun with its 28-inch barrel and overall length of 48 inches was a pleasure to shoot. There were no malfunctions of any kind.

Unlike the other two shotguns in the test, the Remington bolt closed very quickly with a resounding snap. The carrier release under the receiver is a Remington trademark and worked every time.

At the test range, the Remingtons modi?ed choke produced consistent and favorable 50-50 patterns (half the hits above the target center and half below) at 30 yards with the light loads. The pattern was 40-60 with the steel shot – all of the three test shotguns produced low patterns with 3-inch shells – and recoil from the heavy loads was noticeably less than with the other two shotguns. In shooting instruction terms, this shotgun works well and shoots where you look – a plus in anyones book.

Franchi I-12
12 Gauge No. 40708, $749
Imported by Benelli U.S.A., the Franchi could be described as a high-dollar looking, low-dollar semiautomatic. The shotgun features ?ne wood, unusual checkering and a radically cut recoil pad that reminded some of us of the Browning Cynergy. All of these appearance features are a plus for someone shopping for a ?ne fowling piece, but we found that the Franchi does have some performance problems.

In our test, the Franchi would fail to eject a shell at least one time with each box of shells. In addition, the bolt release handle worked loose several times during our shooting sessions. These were two major blemishes on the otherwise admirable performance of a generally ?ne shotgun.

The Franchis simple inertia-driven recoil system, like the Stoeger and other Benelli imports, did receive high marks from the cleaning table because of the few moving parts.

Our test team also was pleased with the overall feel of the 49-inch Franchi, which weighs 7.75 pounds and has a drop at the comb of 1.5 inches with a drop at the heel of 2.0 inches. We thought the step rib over the 28-inch barrel provided a good sight picture and allowed for easy acquisition of targets.

Concerning recoil, the Franchis gel insert pad is an interesting concept, but did not appear to function any better than the standard pads on the other two test models. Because of its cut-out design, adjusting the length of pull (14.25 inches on our test gun) would require quite a bit of stock work. The Franchi was front heavy, which can be a plus for swinging through long-distance targets.

At the patterning range, the Franchi produced a 60-40 pattern with light loads and, like the other test shotguns, dropped to 40-60 with the steel shot. Some adjustment to the stock by a gunsmith might be necessary for some shooters. Overall, the handling ability of the shotgun was ranked as good, but not great, by our test team.

Stoeger 2000 12 Gauge
No. 31515, $435
This was the plain Jane model in the test group, and what the Stoeger did not bring to the party in appearance, it made up for in performance.

Lighter than the other two models, weighing just 7 pounds, the matte-blue-steel-and-black synthetic Stoeger with a 28-inch barrel was also the longest of our test guns.

The overall length was 49.25 inches, with a drop at the comb of 1.5 inches, drop at the heel of 2.5 inches and a length of pull of 14.5 inches. Although the Stoeger took a little more time for shooter adjustment, we could ?nd no fault in its handling ability.

Obviously designed as a practical shooting tool, the Stoeger performed well on both the sporting clay course and during patterning. While not quite as smooth handling as the Remington, the shotgun produced a 60-40 pattern with the target loads and a 40-60 pattern with the heavy steel shot. The performance matched the Franchi with no appreciable difference in recoil reduction between the two shotguns.

The main concern with the Stoeger was that quite a bit of thumb pressure was required to push the bolt release and close the action. A minor adjustment at the factory or by a gunsmith to correct this problem would be recommended.

Another plus to the package was the inclusion of a good selection of chokes, including an extra-full turkey extended choke. This factor helps ful?ll the Stoegers goal of being an all-around utility shotgun.

Gun Tests Recommends
*****Remington 11-87 12 Gauge
No. 25289, $907. Our Pick.
Smooth and quick to the target, this veteran model that has generations of fans is a pleasure to shoot. Like the time-tested Remington 1100, gun fit right out of the box is fine for most users. This shotgun functioned ?awlessly and was easily the test teams favorite.

*Franchi I-12 12 Gauge
No. 40708, $749. Dont Buy.
Despite its moderate price, problems with the bolt handle repeatedly coming loose and a pattern of jamming about one time every box of shells left us with no choice but to pass on this model. Recoil was about the same as the more basic, less attractive and much cheaper Stoeger.

*** Stoeger 2000 12 Gauge No. 31515, $435. Buy It.
A solid functioning ?rearm, this model may not have the looks and feel of its higher-priced counterparts, but we think it is worth a try with a price tag of less than ?ve Benjamin Franklins. We would like to recommend that the manufacturer work on a smoother and easier bolt-release system. GT