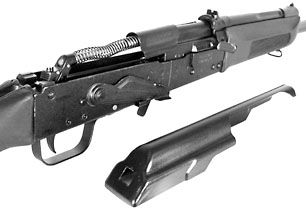 In the wide world of shotgunning, you got your tube-fed pumps and semiautos, your one- and two-shot break-action single shots, over/unders, and side by sides, and the occasional bolt action. But few shotgunners have beheld a magazine-fed pump or semiauto, which on the surface at least, offer simple operation and a lot of capacity.

We recently tested two box-fed shotguns from overseas that are sold in America. The first was the Saiga Semi-Auto 12-gauge, $380, which we obtained from CDNN, P.O. Box 6514, Abilene, Texas 79608; (800) 588-9500; fax (915) 695-4898. European American Armory of Cocoa, Florida, imports the Saiga from Russia. Documents packed with the Saiga describe it as appropriate for “amateur hunting of small and medium winged game,” but to our eyes, it was configured much more like a self-defense shotgun. This was due in part to the gun’s black metal and plastic finish, rifle-type open sights, and five-round magazine (5+1) capacity. Ditto that for the Italian Valtro Model PM5 (Versione Calcio Plastica, MSRP $350), a slide-action seven-shooter (7+1) that came with an attached pistol-grip stock, sights, a thread protector/Cylinder choke, and a wrench.

How We Tested
We evaluated these guns in two layers: administrative handling without ammunition, and function firing at the range. During the first phase, we immediately ran into problems with the Saiga that foresaged difficulties at the range.

We like thorough, well written manuals that leave nothing in the gun’s operation to chance for the new user—the Valtro had a superb manual, even though there were directions in four languages. The Saiga came with a mixture of Russian and English instructions, though we must say the manual itself, copyright EAA, was all English. We were confused when the Saiga manual covered both rifles and shotguns. Then we realized the Kalashnikov action was the basis for the Saiga .308 and 7.62x39mm rifles, as well as the .410, 20-gauge, and 12-gauge shotguns, all of which were covered in the manual.

With this in mind, we went over the operational instructions carefully, looking initially for the bolt block, so that the action would stay open. Despite our best efforts, we were never able to get the bolt block safety, big lever on the right side of the gun, to hold the bolt open. Also, the safety, which would block the movement of the trigger and prevent the gun from firing, was devilishly difficult to put on Fire from the Safe position. Additionally, the gun lacked a wrench that would allow us to change the externally threaded choke tubes, which in reality were more like choke collars. Lacking said wrench, we went to a toolbox and, incredibly, found a Russian-made Searsky choke-tube wrench. (U.S. shooters will recognize this tool as a Sears Craftsman 10-inch crescent wrench.) But because of events that unfolded later, we never needed the wrench.

In contrast, the Valtro offered no surprises in our initial look-over. The slide action was very smooth, the trigger-block safety worked easily, and the magazines slipped in and out of the aluminum receiver positively. We were ready to shoot.

Saiga Semi-Auto 3-Inch 12 Gauge, $380
This gun came with a 22-inch hammer-forged chrome-lined barrel, and the stamped-steel receiver had a built-in side-mount rail for a scope. It also came with a cleaning kit and rod. The bolt was a three-lug design, and gas powered the 3-inch-chamber semiauto action. It had a black synthetic stock and forearm and came with one five-round polymer mag. Extra mags are $20 from CDNN. The gun featured a threaded barrel muzzle adapter for three provided chokes, but as we noted above, it didn’t come with a wrench. A 19-inch-barrel version of the gun is $330; other 22-inch-barrel guns range from $300 to $320. Slings for the gun are $3.

We have already mentioned problems we had with the Saiga, and they would likely be enough for us to pass on the gun. We cranked hard on the Searsky choke tube wrench in an effort to break off the thread-cover collar that came with the gun, but we couldn’t budge it until we put the stock in a vise. The threads badly needed oiling. Once we had the collar off and the threads oiled, we were able to remove the chokes with finger pressure, so that might explain why there was no wrench.

The stamped steel parts on the safety/bolt block and the magazine release chewed the shooter’s fingers up, and we had to watch for sharp edges on the scope mount and the upper receiver release latch. Also, the polymer magazine wasn’t easy to insert, since the bottom of the magazine had to be pushed well forward so the front lip of the magazine would catch in place. Also, we began to see wear on the polymer magazine’s front lip that would likely cause insertion problems down the road. The trigger was mushy and heavy as well.

But it was during function firing that the gun failed. We had loaded the first magazine of Federal 7 1/2s into the gun and fired one round, and the receiver cover popped off and hit us in the head. Naturally, we were concerned about this situation, since most guns we test-fire don’t cast off parts willy nilly. We were standing at a range looking into the guts of the Saiga shotgun, and they weren’t pretty.

It took a while to diagnose the problem, or at least come up with our best guess at what happened, since for our own safety we don’t continue shooting guns that exhibit such failures. The Saiga has a prominent upper receiver release latch and upper receiver release latch button that allow the dust cover to be removed for cleaning. The shooter depresses the button, freeing the latch, which is then pressed inside the receiver cover. The cover can then be lifted off.

The best we can remember, the gun came to us with the upper receiver release latch pushed almost flush into the receiver cover. We didn’t know then how the latch was supposed to appear, since the manual’s images aren’t clear enough to see, and we can’t explain why the latch was depressed. Apparently, though, when we fired the first shot, recoil pushed the latch mechanism down into the action, wedging it into a slot above the trigger group. Of course, this froze the action almost shut, at least until we got the gun apart and reassembled properly. However, we had already ceased testing on the gun for safety reasons.

Valtro PM5 Versione Calcio Plastica, $350
The PM5 is a slide-action 12 gauge with a 3-inch chamber, which is fed by a box magazine that holds seven rounds. The gun comes in 14-, 20-, and 24-inch barrel lengths; we tested the 20-incher. It came with a set of chokes and a wrench, but we tested the gun with the barrel’s Cylinder choke and the thread cover. The gun had a slug-style front sight over a flat-topped receiver, which offered a very crisp sight picture. With the magazine inserted, the gun measured about 9.25 high, slightly more than the Saiga’s 8.25-inch height. Overall, the gun measured 41 inches in length with the pistol-grip stock attached. This is the configuration in which we tested the gun. An optional folding stock shortened the gun to 30.4 inches (folded).

The alloy receiver was mated to a matte-blued-finish chrome-lined barrel, which was externally threaded to accept a grenade launcher or barrel extension. A cleaning kit with brushes, swabs, and a rod was provided, as was a phosphate-resistant metal magazine.

In contrast to the Saiga, everything about the Valtro was self-evident, and all the controls worked flawlessly. The slide action was very smooth, and the large, flat action-release button appeared in front of the trigger guard. It was out of the way there and wasn’t prone to accidentally unlocking the gun, but it was easy to find and manipulate, even in the dark.

The big magazines (extras are $49) were solidly built and inserted readily. They had metal lugs on the front top lip that fit into the receiver and caught positively. The magazine release tab freed the magazines just as well, we thought. We had loading problems with one of the mags, which didn’t want to accept more than five rounds. The spring would not push up more rounds than that without hanging. The second mag worked fine.

We experienced no function problems with the Valtro, other than the problems with one of the magazines. The slide stripped off rounds from the magazine smoothly and shotshells slid up the big, wide ramp without incident. The gun ejected a variety of 2.75-inch and 3-inch mixed shotshells about 4 feet away. When the magazine was empty, the follower prevented the action from closing, so the shooter wouldn’t be confused when he needed a reload.

Elsewhere, the trigger wasn’t crisp and it released fairly heavily. The crossbolt safety operated as it should, preventing the trigger from moving rearward when the safety was engaged.

At the range, we got a swift indoctrination in the Valtro’s handling qualities, some of which were not stellar. The gun, which has most of its mass in front of the magazine due to the steel barrel and slide mechanism, is very front heavy. This made the gun fairly slow to bring on target. When the gun was fired, the plastic pistol grip stock, which lacked a rubber buttpad, slapped the shooter’s face and shoulder hard, even with fairly light Federal game loads. The Remington 3-inch magnums we shot were much less pleasant, and we didn’t shoot too many of them before we dropped back to softer loads.

Gun Tests Recommends
Valtro PM5 Versione Calcio Plastica, $350. Conditional Buy. Though there was nothing overtly wrong with this gun, we believe it has stiff competition outside its clip-fed category that self-defense shooters should consider. Basically, we would ask what advantages does a magazine-fed pump shotgun hold over a tube-fed pump or autoloader? Capacity, perhaps, depending on the competing pump/auto shotgun, most of which don’t offer 7+1 round counts. Fast reloads between ammo types (i.e., slugs in one magazine, buckshot in another) might be a contributing factor, but tubular magazines can continue to accept rounds whereas this magazine-fed gun must be shot dry then reloaded. Also, the magazines increase the gun’s overall profile, especially in height. And with the mag fully loaded, it takes a lot of effort to control the gun with just the right hand (when opening a door, for example). But even with those caveats, we have to admit the Valtro offers a lot for the money. If you like the idea of a clip-fed shotgun, then we think you’ll be pleased with the Valtro.

Saiga Semi-Auto 12-gauge, $380. Don’t Buy. Even if the Russian shotgun hadn’t failed during testing (and we can’t conclusively blame the gun for that), we would not recommend the Saiga in a head-to-head matchup with the Valtro. The Italian gun offered many more options, had better control layout, more capacity, and better workmanship, in our estimation.