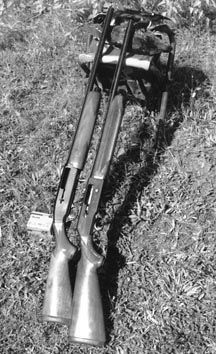 The 20 gauge has long been known as the little brother of the 12-gauge scattergun, and like any tag-along sibling, it often goes underappreciated. Twenty-gauge guns with 3-inch chambers carry a lot of pop for their boresize—enough to send fast-flying teal, high-honking geese, and decoying mallards to the stewpot—but because the 20-gauge shotgun’s receiver can be slimmer than the 12 gauge’s, the Plenty Twenty carries easier than a 12. That can mean a lot when you’re lugging a nylon-mesh sack filled with decoys at 4 a.m.

Of the available 20-gauge shotguns, we recently had a chance to examine, pattern-test, and field-test two of the higher-priced autoloaders: Browning’s Gold Hunter 20 gauge and the Beretta AL390 Silver Mallard. The cataloged MSRP for the Gold Hunter is $735. The Beretta is $885. We found one retail price for the Beretta as low as $680, and we found an actual retail price for the Gold Hunter as low as $670. The Browning Gold 20 gauge sported 26-inch barrels and shipped with three Invector Plus chokes (Full, Modified, IC). Likewise, the Beretta AL390 came packaged with Improved Cylinder, Modified, and Full Mobilchokes (the MC3 package) fitting its 26-inch barrel.

We collected data and impressions of the guns on the range and in the field. At the range, we measured their ballistic performances with an Oehler 35P chronograph. We collected the chronograph data by firing 10-shot strings with the muzzle 7 feet from first sky screen. To collect the patterning and point-of-impact data, we shot the guns at a 6-foot by 8-foot target of brown butcher paper. We assessed the gun’s point of impact by having a shooter mount the shotgun and fire a shot at a 1-inch red dot on the paper. We then repeated the process two more times on the same paper to find the center of the pattern and the shot placement.

To collect the patterning data, we counted and averaged the number of pellets we expected to find in each shotshell. Then we fired three shots per brand with both the Modified and Improved Cylinder chokes at 40 yards. We counted the pellet holes inside 20- and 30-inch-diameter circles, averaged the results, and calculated the choke percentages and shot distribution on the target quadrants. To see how the guns handled, we fired almost two cases of shells on a Sporting Clays range, and then we abused them during dove and teal hunts to see if they malfunctioned in the field.

After this head-to-head examination, we found we liked both guns quite a lot, for reasons we detail below. We also attempt to explain minor differences in their function so that you can fine-tune your decision about which gun might work best for you, because, in sum, we would buy both products if our fairy godmother handed us $1,400 tax-free dollars.

Browning Gold Hunter
Our recommendation: Buy it. As we noted earlier, the 20-gauge iteration of the Gold Hunter isn’t as bulky as the 12-gauge product. The 20 gauge weighs 6.75 pounds to the 12’s 7.2-pound heft. The 20 is 46.25 inches long with 26-inch barrels, compared to the 12’s 46.5-inch length. As a result, this 20 is a slightly more nimble package than its bigger brother, in our view. For pass-shooting dove hunters and for waterfowl jump shooters, this edge could help.

The gun had a 14.25-inch length of pull with a 1-inch field pad that offered relief when testing 3-inch magnum loads. Our test gun had no cast, which makes it handle neutrally for left- or right-handed shooters, but it might be worth putting cast on the stock for some hunters. The stock had 1.75-inch worth of drop at the comb and 2 inches of drop at the heel. (We look forward to testing the company’s Gold Classic line, which has adjustable stock settings like the Beretta. Wonder where they came up with the idea?)

We thought mounting the Browning was smooth and easy. The slight amount of pitch fit our shooters’ shoulders well, and we were able to make the stock come easily to the face without the muzzle dipping. The rounded top of the rubber buttplate slipped from underneath the shooter’s arm cleanly. With a little practice, we were able to see just the top of the rib, which thanks to its grooved top surface, offered a flat-black sight picture below the white front bead.

In our opinion, the stock’s high-gloss finish was too shiny. We would have preferred a satin finish on the stock and barrels, but well we know that dull guns don’t sell. Nonetheless, the finish showed off the stock’s nicely figured walnut. Cut checkering graced the pistol grip and forend. The barrel was blued steel with a black-anodized aluminum receiver.

This test gun came with 3-inch chambers to handle a wide range of 2.75-inch to 3-inch loads. We tested one 3-inch magnum steel load, one 2.75-inch high-brass steel load, and one 2.75-inch target lead load. On the patterning board, the Gold’s Modified choke shot Winchester’s 3-inch steel shot No. 2s the best, placing 73 percent of the shot inside a 30-inch circle at 40 yards. The IC choke put 63 percent of the steel shot inside the circle at that distance. The literature with the gun said the barrel had been back-bored, and perhaps this helped tame its recoil. The thinking behind back-boring is simple: To open the barrel diameter as much as possible to allow the shot wad free passage until it reaches the choke. This supposedly reduces pressures at ignition and promotes a smoother, more comfortable recoil curve. We found the Winchester magnum load wasn’t pleasant to shoot in the Browning, but it didn’t make the gun slap the shooter’s face either. We didn’t notice the recoil when cupped-wing teal were falling into our spread.

In the field and on the range, we thought the Hunter’s 5.5-pound trigger pull was too heavy, though it was crisp and consistent. The safety, located behind the trigger, is a large triangle-shaped button. It worked stiffly, in our judgment, but we liked its location and size better than the Beretta’s safety. We encountered no misfires with the Browning, but we did have some feeding problems toward the end of our range testing. Shooters noticed the gun wouldn’t accept the third shell into the plugged tubular magazine with the breech closed and one round in the magazine. A shot of spray lubricant fixed the problem, however.

Beretta AL390 Silver Mallard
Our recommendation: Buy it. The Silver Mallard has an edge over the Hunter in that its adjustable stock allows the gun to be fit exactly to the shooter. However, getting that fit may not be easy, as we note below.

Like the Browning gun, the 20-gauge Beretta AL390 Silver Mallard weighs in lighter than its 12-gauge stablemate, pushing the dial to 6.4 pounds, just a tad under the 7.2-pound weight of the 26-inch-barrel 12 gauge. Elsewhere, as well, there was a lot to like about the gun. Helpful features included a shell cut-off switch and a reversible safety for lefties. The barrel had a satin-blued finish and a black-anodized aluminum-alloy receiver. The ventilated rib measured 0.25 inch wide with no taper and carried a checkered matte finish. A 0.120-inch silver front bead and no mid-rib bead is standard. The trigger broke between 4 to 4.25 pounds, not too bad for a field gun, in our experience. The trigger had a crisp release we liked. The glossy finish showed off the highly selected walnut stock and forend. The crossbolt push-button safety is located in front of the trigger, but its small size and location make taking it off more difficult than on the Hunter, in our estimation.

When we first began shooting the AL390 as it came out of the box, we were bothered by its stiff recoil. Shooting the Winchester 3-inch magnum steel-shot loads, our testers felt a lot of stock slap on their cheeks and recoil delivered to their shoulders. Then we changed the drop and cast of the buttstock using enclosed parts and solved the recoil problem. We found the ability to shape the fit of the stock to the shooter is an advantage, but it isn’t easy. The shooter has to know (or has to have access to a gunsmith or friend with some stock-fitting experience) how to adjust the stock plates to get the fit he wants, and it can be tedious. However, once the gun is set up properly, it works nicely indeed for a range of body types. The gun had an out-of-the-box length of pull of 14 inches, 0.5 inch of which is a solid-rubber pad. Standard buttstock drop for the pistol-grip was 1.3 inches at the comb and 2.4 inches at the heel.

Gun Tests Recommends
Browning Gold Hunter, $735. This very worthy gun nonetheless has a couple of strikes against it: The trigger needs to be lightened, and the finish is too flashy for a hunting gun, in our estimation. However, it otherwise is wonderful to shoot. Buy it.

Beretta AL390, $885. Buy it. If the MSRPs reflected street prices more closely, we’d give the Hunter the edge in value. But because these two guns are so close in actual retail price (within $10 we found), it’s tough for us to pick an outright winner.

Our testers, however, preferred the Browning, though they were at a loss to define exactly why they liked the Hunter more than the Mallard. The most specific comment was simply, “The Hunter pointed better for me.”

Which gun is best for you? Consider these points before buying:

• If you’re a standard size and shape and you’ve shot production guns all your life, the Hunter does not lose anything to the Silver Mallard. If you’ve had fit problems with other shotguns, then take the AL390.

• If you are able to handle the guns (even better if you can shoot a rental gun 50 to 100 rounds) side by side, concentrate on how much of the AL390’s receiver you see. We noted a tendency among shooters with a forward head position to see too much of the Beretta’s receiver.

• Check the wrist fit in your hand. The shape of the pistol grip is crucial to how you perceive the gun’s handling, and it’s next to impossible for us to quantify differences in the grip shape as an evaluation point. The trigger span distance and the angle of your hand on the grip are the two main characteristics to consider.

• Last, if you’re able to negotiate a better deal on one gun, take it. In many respects, this comparison of the Browning Gold Hunter 20 gauge and Beretta Silver Mallard 20 gauge is a coin flip. When in doubt, let the dollars decide.