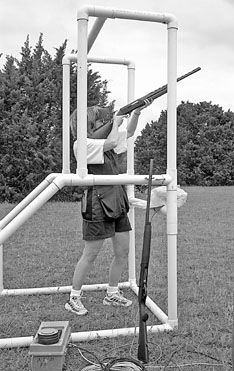 One of the worst mistakes in bringing new shooters into the sport of wingshooting or breaking clay targets is to force them to use a shotgun with excessive recoil. If shooting hurts every time the firearm is discharged, the shooter is not having fun. Eliminate the fun and you will eliminate the possibility of a fledgling shooter coming back for another chance to fill a game bag or smash a few clays.

Among the tools to avoid punishing recoil are the semi-automatic sub-gauge shotguns that can be easy to use and don’t pack a big punch. Many veteran shotgunners will rely on their lightweight 20 gauges for field use simply because they are a pleasant change from 12-gauge sky busters.

Even with their standard 7/8-ounce loads of shot, the 20s can be just as effective as their larger 12-gauge cousins in most shooting situations.

The Benelli innovation requires no outlet for gas operation or barrel movement, with the action system involving a spring between the locking head and bolt. In addition, a revolving bolt head provides a reliable operating system.

In the experience of our testers, both systems are acceptable for most shooting situations, although there could be slightly higher recoil than in gas-operated firearms. Both firearms were very easy to disassemble and put back together for cleaning.

This product is made in Italy by Franchi and imported by Benelli U.S.A. Corp. Although the appearance of the Franchi is a little sleeker and less squared off than a Browning A-5 semiautomatic, the recoil-operated system is a close copy of the respected invention of John M. Browning. In our view, imitation is not the sincerest form of flattery.

The shotgun was provided to Gun Tests by a reader, who experienced problems with shells feeding into the magazine and chamber. Our test group confirmed these problems, as the shotgun would jam and fail to fire about every other round.

After a trip to our local gunsmith, who took the shotgun completely apart to examine the loading system, we were able to fire several rounds of the Winchester AA Super Sport shells in rapid succession without functioning problems. However, all the other test ammunition would prematurely cycle from the magazine about every fourth or fifth round, preventing the firearm from firing. In several instances, empty cases would not eject from the chamber.

Our gunsmith noted that he had seen problems with Franchis whose friction rings on the magazine tube were not placed in the proper order. Owners of Franchi Model 48s need to be very careful when installing the rings. Concerning the handling of the firearm, there were several observations about a basic lack of balance and uncomfortable recoil from many of the test shells.

The recoil may have been caused by the light weight of the Franchi, which tipped the scales at an even 6 pounds. The overall length of the shotgun was 46 inches, with a 26-inch barrel and length of pull of 14.25 inches. The drop at the comb was 1.5 inches, with the drop at the heel of 2.5 inches. Trigger pull was a surprisingly light 4.5 inches, which is very good for such an economical shotgun.

Loading the Franchi was an uncomfortable and unwieldy experience for members of our test group, as the bolt release is on the left side of the receiver. As noted in reviews of other semi-automatics with this feature, use of the left side button can result in the shooter’s right thumb being caught in the action when the bolt is closed. Extra care when loading the shotgun is advised.

Although there were function problems with the Franchi, the patterning performance of various loads was very good. Using the modified choke, the shotgun consistently produced a 50/50 pattern at 30 yards (half the pellets above the middle of the circle and half below) with a solid spread across the 30-inch circle.

With its single silver bead front sight and slightly raised rib, the Franchi allowed our shooters to focus on their targets with no problems. Target hits were good, when the firearm functioned properly.

This gun is also made in Italy and is imported by Benelli. It became an instant favorite of our group.

“This is the gun I’d love to take to Argentina,” one of the testers said after examining the smooth-handling Benelli. Dove hunters in Argentina can run thousands of rounds through a shotgun in a single day, requiring both an easy-handling and durable firearm.

Although there is a resemblance to the Franchi, the feel and balance between the shooter’s hands was much better in the Benelli, we thought. Its thinner synthetic forearm was a perfect fit for all our shooters, and the red-bar sight on the 3/8-inch-high elevated rib really draws the shooting eye down the barrel.

A thin pistol grip, combined with a narrow forearm, provided good handling abilities for the shotgun, which also weighed 6 pounds. However, unlike the hard rubber pad on the Franchi, the Benelli’s stock featured a soft rubber pad that seemed to soak up a lot of the recoil, even with heavier loads.

Though the trigger pull on the Benelli was 6.75 pounds, which is in the typical range for a field firearm, there was crisp break point and none of our shooters had any problems. The variety of test ammunition was handled without a malfunction, and target breaks on the clay course by our test group were solid and frequent.

The cross-bolt safety on the Benelli is a large triangle at the rear of the trigger guard and can be easily handled by both right-handed and left-handed shooters.

With its rotating bolt system, the Benelli’s action was slightly slower than the Franchi action, but not enough to impact any of our shooters’ target-breaking abilities. A cartridge drop lever on the right front of the trigger guard allows the shooter to feed a second round into the receiver, improving the cycling speed — a feature appreciated by our test group.

In its patterning tests, the Benelli modified choke produced a 45/55 pattern (more shot below the middle line than above it) in a 30-inch circle at 30 yards. Slightly low, this patterning performance could be improved with a little gunsmith work.

Benelli M1 Super 90 Synthetic Semi-automatic 20 Gauge No. 11090, $1,000. Our Pick. Light, quick and easy to handle, plus good pointing ability: These qualities found favor with our test group. This is a fine field shotgun capable of handling hard use.

Franchi Model 48 AL Semi-automatic 20 Gauge No. 40205, $715. Don’t Buy. Imitating the venerable Browning A-5 was a good plan, but this gun’s finicky feeding, stout kick, and sluggish handling would make us shy away from it. 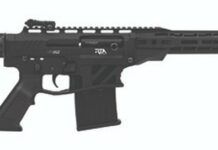 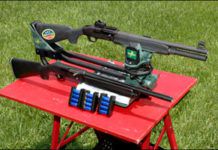