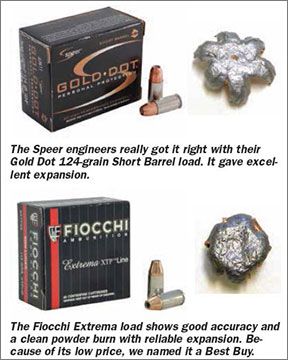 Among the most-popular concealed-carry handguns is the 9mm compact pistol. From the immensely popular mini Glocks to the Sig P290, there are quite a few pistols of this type in service. Thats not hard to understand why: in the same frame size, the 9mm is more powerful than the 380 ACP, and when compared to a similarly sized wheelgun, most 9mms offer more shots than a 38 Special. But many carriers who like the portability of a small 9mm pistol with a lot of shots worry how the 9mm compacts terminal ballistics compare to the same rounds shot out of a full-size gun.

Oddly, thats less of an issue for 38 Special loads. Most makers design their 38 Special loads for use in snubnose revolvers – there arent a lot of 4-inch-barrel 38s in concealed-carry use. However, in the case of the 9mm Luger cartridge, many of the expanding-bullet loads with the best reputations were designed as service loads for use in full-size 9mm pistols with 4- to 5-inch barrels. Because the 9mm relies upon velocity to instigate bullet expansion, a significant loss of velocity may be ruinous to a bullets performance. The issue is important because the once-obscure German service-pistol cartridge is now the most popular semi-automatic carry-pistol caliber in America.

The 9mm jacketed bullet load offers excellent penetration against web gear and heavy clothing, but commercial FMJ loads seem to exhibit icepick-like effect when used against motivated felons. Such a felon bent on causing human misery and suffering must be personally impressed by the ballistics of a cartridge. Some believe that the 9mm with nonexpanding bullets is effective in stopping a fight with one well-placed shot about half of the time. This 50% figure is challenged by the now-decades-old Police

Marksmans Association study, which gave 9mm hardball a more realistic rating, in our opinion – 25%. The 9mm also showed the least likelihood of a hit per each shot fired. Poor hit probability and poor ballistics are a recipe for disaster. Practicing hard and carrying effective ammunition is a foundation for effective defense.

A number of 9mm loads available today have good reputations. Some have been qualified in police service and others in lab testing. Often, police agencies demand more penetration than most of us really need, and with good reason. Unless you are facing felons behind cover or in vehicles, then a bullet with more expansion and less penetration may give better results. Many of the inherent difficulties in getting the 9mm to perform well are compounded by a short barrel that doesnt give a full powder burn. A bullet designed to expand well at 1200 fps may not reach its design threshold at 1100 fps and may not expand much or at all. After all, the bullet would be too frangible if it expanded at a lower velocity than its original design.

In developing this report, we ran across several authorities with differing opinions. One police agency reported good results with the 147-grain JHP, as an example, and partly credited the extra velocity gained by their issue Beretta 92 for this success. Another authority recommended dropping bullet weight in shorter barrels. At first this sounds like a plan, but no police agency will issue one bullet weight for full-size pistols and another for the detectives compact or the policewomans off-duty pistol. The bullet must perform well in all barrel lengths. As for short-barrel performance, dropping a bullet weight isnt always wise. In fact, we found the opposite to be true. The 147-grain and 124-grain bullets lost the least percentage of performance. The relatively modest powder charge and heavy bullets contribute to a full burn and longer dwell time in the barrel. They retain a larger portion of their performance in short-barrel handguns. This brings us to an interesting point. During this test program, there were two goals. One was to attempt to choose the 9mm load with the best overall balance of expansion and penetration in short-barrel pistols. The other was to demonstrate to the reader how their favorite full-size load might perform in a short-barrel 9mm.

An additional concern is the use of +P or +P+ ammunition. Such high-pressure loads are no problem in a service pistol, such as the Beretta 92 or the Glock 19. When fired in a compact such as the Kel-Tec PF-9, recoil is objectionable and function may be impaired when slide velocity is increased so as to outstrip the ability of the magazine to feed. Makers sell +P loads to civilians and have worked powder combinations that reliably feed in most handguns. Just the same, that is one thing we cannot do for you. We cannot proof the load in your personal handgun. But we can supply reliable information on ballistic performance and information on reliability in compact pistols.

The pistol used in this test was the Sig Sauer P290 with a 2.9-inch barrel, representative of the breed of short-barrel 9mm pistols. It proved reliable and accurate enough for personal defense, although the heavy trigger was a challenge during the accuracy testing. Also, the magazine plate was dislodged and prevented the magazine from fully seating. Additionally, we compared three selections with different bullet weights to earlier 9mm tests shot from a 5-inch Browning Hi-Power. In an adjacent table, we brought forward those results to see how the bullets performed compared to the smaller gun. Interestingly, even though we saw sizable drops in velocities in the shorter barrel, the terminal performance of the bullets was similar.

However, the Speer Gold Dot Short Barrel load exceeded the other 124s in penetration, and it also showed the smallest velocity drop between the full-length speeds and the short-barrel speeds. Not to be overlooked, some of the raters preferred the best-of-test penetration of the 147-grain Speer Gold Dot 23619 bullet to overcome winter jackets and heavily muscled adversaries. Just the same, in short-barrel 9mm performance, the Speer Gold Dot 124-grain +P Short Barrel load really shines as the best overall choice, in our opinion.

This load is rated at Extra Power, not +P. This is probably as hot a load as you can get without being rated +P. The EXP is also offered in a 50-round box, making it a good buy. Recoil is more than the other standard-pressure loads, but so is velocity. This load is a good example of the difference in 9mm loads when fired from 3- and 5-inch barrels. The EXP dropped 88 fps in the short barrel.

Penetration was the same, but expansion was greater plus the bullet separated from the jacket but did not fragment. The bullet and jacket did not separate in the 5-inch gun either, but it was a different lot tested about two years ago. The bullets appeared identical in the loaded cartridge.

Our Team Said: This is a good load, but penetration is on the short side. If you like rapid expansion, this is a good and affordable choice. We rated it down based upon our penetration criteria.

On a per-round basis, this is the least expensive ammunition tested. This loading is the slowest of the 115- to 124-grain bullets, making it easily the most controllable load tested. Accuracy was best of the test, and considering the size of the pistol and the short sight radius, the light recoil has much to do with the practical accuracy. Expansion was modest, but penetration ideal at 12 inches.

Our Team Said: Looking at the whole picture – good control, accuracy, enough penetration, and a great price – puts this load at the top.

This load is usually offered in a 50-round box, and the Midway offering is the first time Black Hills has offered a 20-round box, to the best of our knowledge. It is a good buy, using a proven bullet, the Hornady XTP. Expansion is adequate and penetration an ideal 14 inches in water. Recoil was greater than the EXP load, but then we have a bullet 9 grains heavier but nearly as fast as the lighter bullet. This load is considerably faster than the Winchester 124 grain +P offering.

Our Team Said: The Black Hills loading offers a good balance of expansion and penetration.

The Winchester load has several good attributes, including powder development that shows practically no powder flash. Coupled with the Sigs night sights, this would make the Winchester load a good choice for night firing. Recoil isnt bad for a +P load. Compared to a similar Winchester 124-grain Ranger T +P shot in the 5-inch gun, the PDX load lost 118 fps in the short barrel, lost a little penetration and retained its expansion.

Our Team Said: The load burns cleanly and renders good performance. Winchester gets it right more often than not, and this is a good load that seems widely distributed.

The current ammunition shortage almost prevented this load from appearing in these pages. Most of the others were on hand. The Speer load was difficult to obtain, but then everything is at present. The Gold Dot design is tweaked for extra performance in the short-barrel gun. The +P rating increases velocity over the standard Gold Dot, and the bullet features a softer core. Expansion and penetration were excellent. This is a solid choice for all-around use. Expansion is the greatest of any load tested, and accuracy was excellent.

Our Team Said: This load is specifically intended for short-barrel use, and as a result of careful development and quality manufacture, it was the overall pick of our raters.

The Speer Gold Dot bullet gave up little in velocity, losing 79 fps in the short barrel compared to a five inch barrel. Barrel burn seemed complete. The bullet didnt seem very dynamic when hitting the jugs, with little splash, and it drove to the deepest penetration. The heavy Gold Dot load gave performance similar to that achieved with a heavy 158 grain .38 Special bullet. Expansion was modest but very uniform.

Our Team Said: If you have a need or desire for a heavy bullet and deep penetration bullet the Gold Dot is as good as any and better than some.