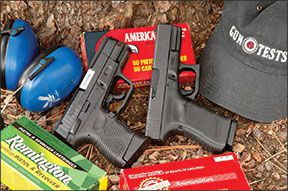 We were able to get our hands on two mighty popular guns for this test, a couple of the potent 40-caliber mid-size pistols that we also compare to the two forties we tested in the March 2013 issue. This time we look at the Glock 23 Gen 4 (MSRP $650) and the Taurus 24/7 G2C (MSRP $555). We tested with the same ammo types, Remington 155-grain JHP, Black Hills 165-grain JHP, and American Eagle 180-grain FMC with its truncated-cone design.

Both of these guns came with loading helpers. We didnt need one with the Glock unless we wanted to fully load the magazines. Commonly in our practice sessions, we load only five or ten for safety reasons, and these were easy to get into the Glocks 13-round magazine using only our fingers. The Taurus needed the mag loaders help for nearly all its rounds, having a magazine spring that was about twice as stout as that of the Glock. Of course, there were many other areas of comparison we considered, which we relate below:

Glock 23 Gen 4 40 S&W, $650
Out of the box the Glock felt mighty good. This version of the popular gun comes with several different back-strap contours that the owner can easily swap out to better suit his or her individual mitt. Neither of the two add-on grips make the grip any smaller, however. We liked the grip as it was. One of our big complaints about the previously tested S&W M&P Compact was its lack of traction to help us keep the gun from twisting in recoil The Glock and the Taurus dont have that problem. Their grips were very well made for control, and we appreciated that right from the start.

The Glock is all flat black, with a minimum of controls. Theres the trigger with its tiny but effective leaf that gives the gun all the safety it needs. We noted the contour of the trigger has been improved, and we liked it. The magazine release is reversible, and worked like it was supposed to. There was the slide stop, left side only, and protected with a molded-in ledge right below it. Finally, there were the take-down levers above the trigger opening. The levers are actually two ends of one plate-like piece. There was an accessory rail in front of the trigger guard.

The sights had a wide, square, U around the rear notch and a white dot on the front. Tritium sights are optional items. There was a tactile loaded-chamber indicator in the form of a slight step on the extractor that could be easily felt with the (right-hand) trigger finger. The top edges of the slide were smooth enough to not cut the hands during clearance drills. However, if you do many of them with stiff-spring guns, youre going to hurt your hands, as we found out.

Takedown was simple. With the gun empty and the magazine out, drop the striker, pull the slide back slightly and pull down on the takedown levers on both sides, and ease the slide forward off the frame. The captive spring comes easily out, and then you can get the barrel and guts as clean as youd like. Reassembly is even simpler. We like to put some of Brian Enos Slide Glide (BrianEnos.com) on the rails. Then, with the barrel and spring in place in the slide, simply slip in back onto the frame and tug on the slide. The takedown levers will click up into place, and youre ready to go. We thought the workmanship inside the Glock was excellent, just as it was on the outside.

On the range we had zero problems. The trigger was decent and clean, and we were able to shoot groups in the 2.5- to 3-inch range with ease at 15 yards. The gun shot essentially where it looked, unlike the Taurus. The groups centered all three test loads within 2 inches of the aim point. The gun got the best groups with the heaviest bullets.

Our Team Said: We liked this gun a lot. It handles the hotter 40-cal cartridges well, and gave exactly no problems. We would buy this one far and away over the other three guns tested in this 40-caliber grouping.

TAURUS 24/7 G2C
40 S&W, $555
The gun came in a roomy hard case with two mags, one holding 11 and the other 13 rounds, despite a mistake on the company website (TaurusUSA.com) that indicates its a 15-shot pistol. Its not. The gun had a blocky look with lots of metal above the hand. There was an accessory rail under the muzzle. The sights were three white dots, giving an excellent sight picture. The grip was on the square side, a touch more so than the Glocks. As noted, traction was excellent thanks to intelligent molding on the front and rear straps. The smaller magazine let us get our whole hand on the gun. We didnt like the feel of the bigger one, and it made the gun relatively huge looking. But if you need it, its there.

The very busy exterior of the gun was all flat black except for the white-finished chamber top and side. The barrel itself was blued. The overall setup was ambidextrous. The mag release could be pushed or pulled. The trigger had a Glock-like leaf in its center, and the takedown levers were very similar to Glocks. There was an external ambi safety lever in a handy yet unobtrusive position for the thumb. The safety could be shoved up to the On position with the trigger anywhere except fully rearward. After a shot, the safety could be put on, leaving the trigger in its rear mode, which doesnt reduce the force needed to fire the gun, just the distance the trigger has to travel. The safety can then be lowered to its normal position, leaving the gun ready to fire with the trigger mostly back. The trigger safety works in that position also. If you dont want to fire right away, you can depress the safety lever further, which returns the trigger to the fully forward position with a positive click. However, because of the trigger safety, we thought the thumb safety could be entirely ignored, making the trigger functions similar to those of the Glock, except for a much longer pull for the first shot on the Taurus.

Despite a busy look, the gun felt good in the hands. The safety was out of the way, and the rest of the controls were where they belonged, we thought. The gun sat higher in the hand, and it had somewhat of a top-heavy feel when unloaded. The mag catch was stiff at first, but cleared up quickly. A press in either direction dropped the magazine. Beware the short grip, which can give you a severely pinched hand during fast reloads. The mag will not always drop clear unless your hand is entirely out of the way. The longer mag didnt help at all here. There was a loaded-chamber indicator on top of the slide. The slide and rear sight were plenty smooth for practicing those tap-rack-bang drills without removing too much of your hand.

Some of us thought the Taurus felt unfinished compared to the Glock. There were sharp edges, some of which bothered our grip, on the back of the bottom strap where there is a cutout for, of all things, a lanyard pin. This is one of the more useful items on a handgun if its carried in a boat, or anywhere the gun might be dropped into open water. A good lanyard can also aid shooting. The original 1911 45 design had such a setup. This ones sharp edges needed attention. The bottoms of the slide stops, one on each side, were also sharp and unprotected. They could cut the unwary badly, or damage the holster or clothing.

Like the Glock, the Taurus is striker fired. The trigger merely moves the firing pin rearward and then releases it to fly forward and fire the gun. Theres no hammer. Takedown is very like a Glocks. We noted if you followed the directions in the manual exactly, the slide wont come off. Heres how we did it. Clear the gun and the chamber, move the slide slightly rearward, press down on the two little buttons above the trigger and let the slide go as far forward as it wants to. Then press and hold the trigger, and you can then move the slide off the front. The captive double recoil spring comes out with no strain, and so does the short barrel. The inside of the slide is beautiful, simple, and clean, showing excellent workmanship. The inside of the plastic grip is as modern as tomorrow in design, with obvious heavy nods to Glock. In short, the guts looked very complex but also very good. Reassembly was not as easy as for the Glock, but still basically a simple reversal of the takedown procedure. We had to carefully guide the rear of the slide into place, sort of feel our way back together, and then pull the slide slightly backwards until the takedown plate clicks up into place. With the Glock, the parts simply fall together.

On the range we got acceptable accuracy from the 24/7, but we had to work to do it. The trigger pull was simply awful, averaging 9 pounds of long, hard, and gritty pull. This greatly hampered our ability to shoot the gun well. Something would have to be done to it before wed accept this gun for our own use. The Glocks pull was 6.4 pounds, and entirely predictable. The recoil of the 24/7 was about like that of the Glock, but because of a higher barrel axis the flip was a bit more pronounced. We were able to make groups nearly as good as those from the Glock, and believe a better trigger would make the two guns essentially equal for accuracy. The Taurus surprised us with its adjustable rear sight. The gun was shooting low, but a twist of the screwdriver blade on the multi-tool that came with the gun got it on target. Two small screws adjust limited windage and limited elevation. There was a modified Allen wrench on the multi-tool to lock the safety device on the right rear of the slide, just below the rear sight.

Our Team Said: Despite the clever features of the Taurus, we thought this gun was lacking something compared with the Glock. Yet it had some nice features, including the lanyard pin, double-strike capability (if thats important to you), adjustable sights, multiple safety features, the manual thumb safety which some must have, and overall excellent workmanship.

Of the four guns in this two-part series wed rate the Glock 23 an A, the S&W M&P Compact a B+, and the Taurus 24/7 and the Kahr CW40 at the B level. The Taurus had capacity over the Kahr but a huge grip by comparison, and about $100 more cost. Wed be happiest shooting them with the heavy 180-grain FMJ bullets, but either of the two JHP loads might be better for self defense. The S&W M&P ($570) held up to 11 shots, and the Kahr with its single-stack magazine and slender grip held only seven. The Kahr had the smallest grip and the lowest price ($485). They are all pretty good guns, but our testers clearly preferred the Glock.