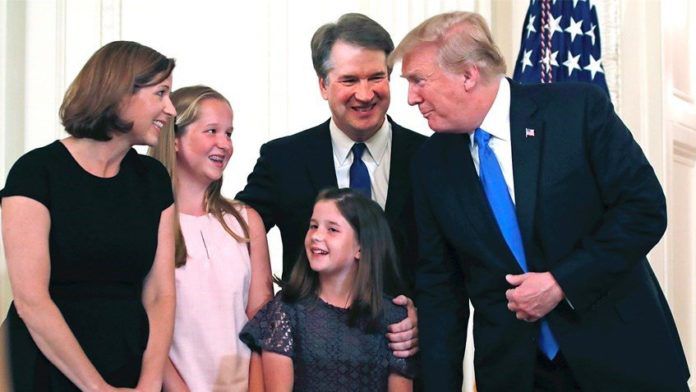 From the standpoint of gunowners’ rights, will Judge Kavanaugh be “fer us or agin’ us” if he’s elevated to the Supreme Court? Or, said another way, will he be a “good guy on guns” or just a so-so one?

“Right now, nobody knows for sure how a ‘Justice Kavanaugh’ might rule on gunowner rights at the SCOTUS level,” said Gun Tests Editor Todd Woodard. “But the tea leaves, the entrails, the penumbras suggest he strongly leans our way.”

– “President Trump has made another outstanding choice in nominating Brett Kavanaugh for the U.S. Supreme Court. He has an impressive record that demonstrates his strong support for the Second Amendment,” said Chris W. Cox, executive director, NRA-ILA. “We urge the Senate to swiftly confirm Judge Kavanaugh to the U.S. Supreme Court, just as it confirmed him to the U.S. Court of Appeals for the District of Columbia Circuit.”

– National Shooting Sports Foundation (NSSF) Senior Vice President and General Counsel Lawrence Keane said in a release, “We are confident that Judge Kavanaugh will serve our nation with distinction as an associate justice of our nation’s highest court and that he will make decisions that will serve to protect the Second Amendment and other Constitutionally guaranteed rights of law-abiding Americans.”

– Alan M. Gottlieb, the Second Amendment Foundation’s executive vice president, said, “We’re encouraged by this nomination because by adding Judge Kavanaugh, we might see the high court become more willing to accept and rule on important Second Amendment issues, such as right to carry.”

Woodard said the gun groups support Kavanaugh because of decisions he wrote during his tenure on the U.S. Court of Appeals. In particular, in 2011 he wrote a strong dissenting opinion in opposition to Washington, D.C.’s ban on commonly owned semi-automatic firearms and registration requirement.

Known as Heller II, the case arose from The District of Columbia v. Heller, in which the U.S. Supreme Court overturned Washington, D.C.’s ban on handguns in the home. The majority of the Court of Appeals upheld the assault-weapons ban in Heller II. Kavanaugh was one of two appeals court judges who disagreed.

“A ban on a class of arms is not an ‘incidental’ regulation,” Kavanaugh wrote in the 2011 dissenting opinion in Heller II. “It is equivalent to a ban on a category of speech.”

Gottlieb, with the Second Amendment Foundation, added, “We’re encouraged by this nomination because by adding Judge Kavanaugh, we might see the high court become more willing to accept and rule on important Second Amendment issues, such as right to carry.

“We know that the Court will face enormous challenges on other rights issues, but the right to keep and bear arms is a cornerstone of the Bill of Rights…. It is time for the court to examine the constitutionality of various state laws that restrict the right to carry, for example, and make arbitrary decisions about who can exercise that right. Our courts should be the place that we can trust to safeguard our rights and promote freedom.”

“Judge Kavanaugh has demonstrated his clear belief that the Constitution should be applied as the Framers intended. To that end, he has supported the fundamental, individual right to self-defense embraced by Justice Scalia in the historic Heller decision. “

GOA’s Pratt added, “Initial reports suggest that Judge Kavanaugh deeply respects the Second Amendment, even though he was not the strongest of the finalists. Nevertheless, Judge Kavanaugh filed a pro-gun dissent in Heller II, arguing that Washington, DC’s ban on semi-automatic firearms was arbitrary and unlawful. In fact, his dissent was so well argued that GOA’s subsequent legal briefs have repeatedly held up his dissent as the model to follow.

“In another case,” Pratt said, “Kavanaugh correctly interpreted the Firearm Owners Protection Act to find that a defendant could not be sentenced to 30 years in prison for use of a fully automatic firearm if he was unaware that the gun fired automatically.

“Kavanaugh also supported the prevailing opinion in the Citizens United case, which affirmed GOA’s voice in the political arena. GOA hopes that the Senate will confirm Kavanaugh – and that the Supreme Court will take up more Second Amendment cases, thus repealing the onerous and unconstitutional restrictions on the right to keep and bear arms that exist throughout the country.”

Woodard says another part of Judge Kavanaugh’s Heller II dissent comes as something of a relief.

“So many politicians, lawyers, and celebrities don’t know a fig about firearms function, yet they write unrealistic rules gun owners must follow,” Woodard said. “Judge Kavanaugh at least gets the basics.”

Kavanaugh wrote in that 2011 dissent that “the Supreme Court held that handguns – the vast majority of which today are semi-automatic – are Constitutionally protected because they have not traditionally been banned and are in common use by law-abiding citizens. There is no meaningful or persuasive constitutional distinction between semiautomatic handguns and semiautomatic rifles.”

Woodard pointed out that as an appellate judge, Supreme Court precedent bound Kavanaugh. As a Supreme Court justice, his interpretation of the Second Amendment can set precedent other courts must follow.

“It’s clear that Judge Kavanaugh is not a 2nd Amendment absolutist,” Woodard said, “so he will not please people who believe that all gun control is impermissible. But it appears he also won’t make the Second Amendment a second-class right. We’ll take that until more reinforcements arrive.”

Mother Jones: Here’s How Kavanaugh Could Deal a Big Blow to Gun Control