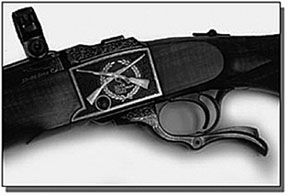 Gun and Knife for a Good Cause
Sportsmen, collectors and others who appreciate craftsmanship and unique history have a chance to own a one-of-a-kind Ruger No. 1 single-shot rifle and an original Ross Tyser RavenFork Hunter-Skinner package that includes a matched set of hunting knives in Thunderforged Damascus. Both gun and knife will be sold to the highest bidder on www.Gunbroker.com.

The items are currently up for auction, and bidding will conclude during the 2006 Shooting, Hunting and Outdoor Trade (SHOT) Show, Feb. 12, at noon, PST. All auction proceeds will benefit the nonprofit Wonders of Wildlife (WOW), the new home of National Hunting & Fishing Day, the annual celebration that recognizes hunters and anglers for their role in conservation.

Sturm, Ruger & Co.s Ruger Studio produced the auction rifle to mark the 100th anniversary of Americas most popular deer-hunting cartridge, the .30-06. The Ruger No. 1 single-shot rifle is hand-engraved by master engraver Paul Lantuch and features sculpted gold inlays and a special serial number in recognition of the historic cartridge.

The 2006 auction proceeds, as always, will be used to promote the heritage of hunting, particularly to young people, through the 35th Anniversary of National Hunting and Fishing Day, said Tony Schoonen, WOW executive director.

S&W Introduces Walther PPK 75th Anniversary Edition
After 75 years, the pistol that helped make James Bond famous will be recognized with a special commemorative model. Manufactured of carbon steel with a polished blue finish, the Anniversary Model has wood grips as well as full scroll, machine engraving on both sides of the frame and slide. A 24-carat gold-plated Walther logo and model name along with an engraved 75th Anniversary will be featured on the left side of the frame. Each anniversary PPK will bear a special serial number, starting with 0000PPK. Smith & Wesson, under a licensing agreement from Carl Walther GmBH, manufactures a PPK/S. The Anniversary Model is smaller in size and almost 3 ounces lighter than the PPK/S.