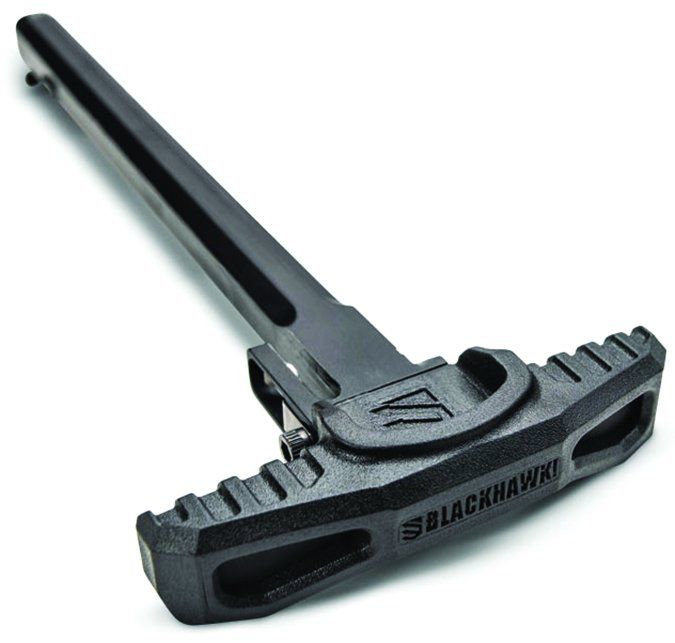 As prices continue to come down as the result of a gun glut (supply and demand economics), more folks will be buying guns, and we’ll want to shoot them. So we will be adding enhancements to those firearms and feeding ammunition into them with a big grin. Here are some new products Gun Tests‘ staffers have taken note of that will make your firearms run, run better, or add fun.

The No-Latch Ambi Charging Handle eliminates the need to squeeze a small latch to charge the rifle. And it’s welcome news for left-handed shooters, as the design gives full ambidextrous control. The over-molded handle provides a larger pull point from both sides, clearing low-set optics, and the no-latch design control point speeds reloads and clears malfunctions faster. Machined from 7075 aluminum. $40.

Browning has added four new loads in the BXV centerfire lineup. All are loaded in nickel-plated cases with rapid-expanding polymer-tipped bullets. Available in 35-grain 22 Hornet, 50-grain 243 Winchester and 22/250 Remington, and 56-grain 243 Winchester loads. The BXR big-game centerfire rifle line gets four new SKUs—270 WSM, 6.5 Creedmoor, 7mm-08, and 7mm Remington Magnum—for 2017. All are loaded in nickel-plated cases with a copper-matrix-tipped bullet with a nickel-plated jacket.

The Workhorse Electronic Trap fits in the trunk of almost any vehicle and can be unloaded and set up by one person. It runs off a single deep-cycle battery, and the detachable magazine holds up to 50 clays. The trap is adjustable and can throw clays with three different launch angles up to 75 yards. $360.

GBW Cartridge out of Venice, Florida, is a boutique defensive handgun cartridge maker. The Legend Pro line includes high-performance loads for common rounds, but also big bores, such as the 454 Casull, 460 S&W, and 500 S&W. All are loaded with expanding bullets made entirely of copper. GBW’s centerfire rifle cartridges also have all-copper expanding bullets. Offerings include loads for the 223 Remington, 300 Blackout, and 308 Winchester.

Good for the toolbox: Gerber’s new Center-Drive Multi-Tool offers a center axis full-size driver in the center of the tool to improve torque and rotation. A 30-percent larger outboard blade and one-thumb-opening sliding jaws enhance productivity as well. $89.

The new IMR Target is a fast-burning, fine-grained, small-flake pistol powder for pistol cartridges like the 25 ACP. The IMR Red is designed to be an efficient, clean-burning 12-gauge target powder for Cowboy Action reduced loads. IMR Green, slightly slower burning than the IMR Red, is suited for Trap Handicap and Sporting Clays enthusiasts. IMR Unequal combines small-sized flakes for a range of shotshell and pistol cartridges. IMR Blue, the slowest burn speed of the bunch, has excellent application for heavy 12-gauge 2.75-inch, 3-inch, and 3.5-inch field loads. The new powder series is available in 1-pound, 4-pound, and 8-pound containers. IMR Red, IMR Green, and IMR Unequal are also available in 14-ounce containers. Prices start at $30.

The new CFE BLK Powder performs in many smaller-capacity cartridges, such as the 17 Hornet, 17 Ackley Hornet, 218 Bee, and 221 Fireball. Other top performers include the 6.8 Remington SPC, 300 Blackout, and the 7.62x39mm Russian cartridge. The fine powder leaves no copper residue. Available in 1-pound and 8-pound containers.

New additions to the American Gunner and Whitetail lines include a 6.5 Creedmoor load that utilizes a 140-BTHP bullet and a reduced recoil 12-gauge slug. For deer hunters, there is also a 129-grain Interlock load for the 6.5 Creedmoor.

A pair of centerfire loads are being released to commemorate William B. Ruger. The limited-edition ammo will be available in 204 and 480 Ruger. Both loads will be in specially marked boxes that clearly identify it as being commemorative ammo. The 204 Ruger load will use a 32-grain V-Max bullet at 4225 fps. The 480 load will use a 325-grain XTP bullet rated at 1350 fps.

The updated Impact Sport Bolt Electronic Earmuff will have the same noise-reduction rating (NRR) of 22dB and the slim profile of the popular Impact Sport. The new earmuff offers improved circuitry and a response time that is 250 times faster than the current model. There is improved amplification, a premium leatherette headband, an AUX cable with in-line microphone, and features such as extra ear cushions and a belt clip. An automatic four-hour shut-off extends battery life. The earmuffs fold for storage. $100.

Nosler has two new cartridges. The first is the 33 Nosler, which shares the parent case of the 404 Jeffery, but will push a 225-grain AccuBond to 3025 fps. The other new cartridge is the 22 Nosler, which is intended to be the most powerful 22-caliber centerfire cartridge that will reliably function in the AR platform. It will propel a 55-grain bullet to 3500 fps.

In addition to some new bullet announcements, Nosler has added a variety of loads to its ammunition lines. The Trophy Grade line has one new AccuBond load for the .33 Nosler and three new AccuBond Long Range loads for the .308 Win., .30/06, and 33 Nosler. The Match Grade line has new loads for the 22 Nosler, 26 Nosler, 28 Nosler, 30 Nosler, and 33 Nosler.

Aficionados of the 357 Magnum now have an 86-grain ARX load at 1650 fps that generates 520 foot-pounds of energy. The 45 Colt Polycase load has a 158-grain ARX load in its Preferred Hunting line for that old cowboy classic. Additional ARX Preferred Hunting loads are available for the 458 SOCOM and 50 Beowulf. The new RNP Sport Utility line of ammo from Polycase features a round-nose (RN) bullet intended for accuracy shooting on steel. Offerings include loads for the 380, 38 Special, 9mm Luger, 40 S&W, and 45 Auto.

For 2017, the high-tech Golden Saber Black Belt bullet—originally only available for law enforcement—is going commercial. Four loads will be offered in 9mm Luger, 9mm Luger +P, 40 S&W, and 45 Auto. $27 per box of 20.

The most exciting new load from SIG might be the subsonic 220-grain 300BLK V-Crown offering, which features the SIG V-Crown bullet. Created for the AR-15 platform, this load is ideal for use with a silencer.

SIG also has introduced a new 223 Remington load to its Match Grade Elite Performance Ammunition line. It’s loaded with a 77-grain Sierra open-tipped match (OTM) bullet with a muzzle velocity of 2750 fps. The HT hunting line of premium-grade rifle ammunition now includes 223 Remington and 308 Winchester offerings, both of which feature an all-copper bullet.

Starting in 2017, instead of a large hollowpoint, Speer Gold Dot 2 ammunition utilizes an elastomer insert. This circumvents the need for target material to enter the hollow point and drive expansion. It also provides uniform terminal performance through the range of intermediate barriers specified by the FBI testing protocol. Offered to law enforcement only, Gold Dot 2 ammunition is available in a 147-grain 9mm, 180-grain 40 S&W, and a 230-grain 45 Auto. $28 to $34 per 50.

Winchester has added three high-performance subsonic loads to the Super X line. These include a 200-grain 300 Blackout load and a 185-grain 308 Winchester load at 1060 fps. Both are designed for improved terminal performance at subsonic velocities and have a radical profile for enhanced expansion. There’s also a 45-grain 22 Magnum load at 1060 fps. It has been engineered for use in suppressed firearms for the ultimate in low-noise performance, but it will also produce less audible sound when fired through standard 22 Winchester Magnum firearms.

For those areas that limit traditional ammunition, in 2017 Winchester is introducing a lead-free option called Varmint X Lead Free, built with similar zinc-core technology as that in Winchester’s Super Clean pistol ammunition. It will be initially available for the 223 and 22/250 Remington, and the 243 Winchester.

Winchester’s new training expansion comes in the Super Clean line, which in 2017 will add a 45 ACP offering. Super Clean comes 50 rounds per box and is ideal for use on indoor ranges.