We recently published a news item that updates our readers on legal troubles the SIG Sauer P320 is encountering. Most recently, the Loudoun Times-Mirror website is reporting that a Loudoun County (Virginia) deputy has filed a lawsuit against SIG Sauer alleging that her fully-holstered P320 duty weapon discharged and sent a bullet into her leg. According to the newspaper’s account, the incident occurred this year on Feb. 7, “… when 37-year-old Loudoun County Deputy Marcie Vadnais went to the Northern Virginia Criminal Justice Academy to attend a general instructor course.” The Times-Mirror further reported, “In accordance with academy policy, Deputy Vadnais began removing her firearm from her belt when she arrived.” According to the lawsuit, as she fed the belt through the holster’s first tooth, her SIG Sauer P320 somehow “fired one nine millimeter bullet, which hit her in the upper right thigh.”

“At no time during this incident did she touch the trigger, which at all times was inside and covered by a SIG-manufactured holster,” the lawsuit reads. The round shattered the deputy’s femur in several places and caused “massive blood loss and other internal injuries,” according to the suit. Deputy Vadnais, a seven-year veteran of the force, still has shrapnel and bone fragments embedded in her leg. A steel rod now holds her femur in place.

At Gun Tests, our shooters have had no problems with the P320 in terms of reliability and had no malfunctions with it. We gave it a Grade B rating in our first report on it in 2015. Many of our readers have told us they won’t buy ‘B’-rated guns, especially when there was another handgun in the test — a Heckler & Koch VP9 9mm Luger — which earned a Grade A rating and was Our Pick. In the November 2016 issue, we tested a different version, the SIG Sauer P320 Carry 320CA-9-BSS, which earned an A grade. If our team had experienced a safety problem with a test firearm like what’s been reported, we would have given the P320 an F or failing grade — and we would have unequivocally told our readers not to buy it. But we bought two over-the-counter handguns and simply didn’t have a problem with them.

Still, it’s incumbent on us to follow up our reviews with some of the reported problems and legal actions affecting the P320.

In the most recent legal action, Deputy Vadnais is seeking $10 million in damages and to have SIG Sauer recall the pistol. In the suit, the deputy suggested that the company issue an “enhanced, unambiguous warning to all purchasers of the P320, stating that it can fire without a trigger pull in its existing condition.” SIG has released a statement that “reaffirms the safety of the P320 pistol.”

In response to social media rumors questioning the safety of the P320 pistol, a variant of which was selected by the U.S. government as the U.S. Army’s Modular Handgun System (MHS), SIG SAUER, Inc. has full confidence in the reliability, durability and safety of its striker-fired handgun platform. There have been zero (0) reported drop-related P320 incidents in the U.S. commercial market, with hundreds of thousands of guns delivered to date.

The P320 meets and exceeds all U.S. standards for safety, including the American National Standards Institute (ANSI) and Sporting Arms and Ammunition Manufacturers’ Institute, Inc. (SAAMI), as well as rigorous testing protocols for global military and law enforcement agencies.

All SIG SAUER pistols incorporate effective mechanical safeties to ensure they only fire when the trigger is pressed. However, like any mechanical device, exposure to acute conditions (e.g. shock, vibration, heavy or repeated drops) may have a negative effect on these safety mechanisms and cause them to not work as designed. This language is common to owner’s manuals of major handgun manufacturers.

As a result, individual attempts to perform drop tests outside of professionally controlled environments should not be attempted.

“SIG SAUER is committed to producing only the finest products,” said Ron Cohen, President and CEO of SIG SAUER. “Safety and reliability have been and always will be paramount to the SIG SAUER brand.”

Gun Tests readers weighed in on the P320 post as well.

“TP8433” posted: Discharges from firearms can occur when debris, clothing, or items follow the trigger guard into the holster. Holsters vary in the ability to minimize those events. I know of one verified case of a striker-fired gun going “bang” in the holster with no involvement from the shooter. This was not with a SIG P320, and the firearm was defective. It was an older duty gun in a duty holster. It was a lefty.

The left frame rail of this 40-caliber pistol was cracked, and the firing-pin safety was worn. When the individual leaned on a table, the slide separated, raising the firing-pin lug from the cruciform. With a defective firing-pin safety plunger, the pin went forward enough to ignite the primer. In other cases during holstering, it is generally an article of clothing that snags the trigger. Had she dropped the gun, I might give the story credence.

Had she had a handgun that was old with ten thousand rounds of 40 caliber cycled through it, I might think something broke (although the frame rails on the SIG P320 are solid, unlike the one that I described earlier. In this case, there is a likelihood that something snagged the trigger. From the article, it said she was using a SIG holster. I would like to know which holster it was since the SIG ships with a paddle-style holster and she was “threading it through her belt,” which indicates it may have been a different SIG holster.

“GreyFox 73” posted: As ex-law enforcement, I hate to doubt another officer; however, if a P320 can be fired so easily, supposedly without touching the trigger, I think we would have had many more such incidents.

“Montanagun” posted: She would not have shot herself if she had followed one of the most important rules of gun safety: Never point the muzzle at anything you’re not willing to destroy. When I put on an IWB holster, I put my gun in the holster first and then clip it over my belt.

“Carl Casino” posted: I have owned and shot my P320 and can honestly and truthfully say I have not had any problems with misfiring or any problem at all. I am not saying that this officer did not have a problem, but I am mighty curious as to how it happened, and it needs to be checked into further before SIG has to spend a lot of money to find out the accident was on her and not the gun.

“Fred T” posted: If her story is true, it should be easily repeated. Just safely test the gun with blanks in the same fashion that she alleges it fired. Guns don’t go off while holstering unless the trigger is pulled in some way. It’s also important to note that the SIG voluntary upgrade was for a potential discharge after the gun had been dropped at certain angles. This is completely unrelated to the deputy’s claim that the gun went off while placing it in her holster.

“Colonel K” posted: I have had and carried and drawn my P320 Compact pistol thousands of time with no issues.

“Roadstar” posted: Had her P320 been upgraded by SIG? And why was a law-enforcement officer using a SIG holster and not a Level II or III retention holster? I have had my P320 for over a year now and shoot and carry it often, and have never had a problem of any kind.

To read the full post with additional links and information plus technical images, or to add your comments, click here. 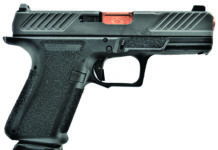