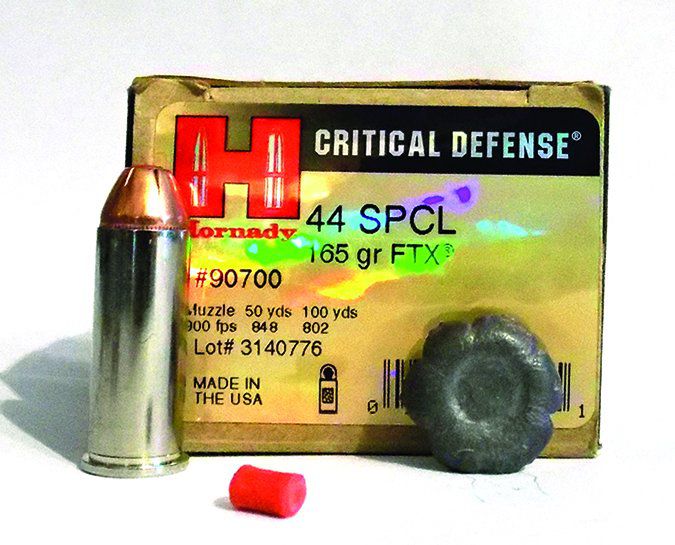 The 44 Special is a misunderstood cartridge. Never meant to be a powerhouse, the 44 Special was introduced as a counterpoint to the 44-40 WCF and the 45 Colt. A continuation of Smith & Wesson’s 44 Smith & Wesson Russian, the more powerful 44 Special was intended to be a mild-mannered and accurate big-bore cartridge. Loaded with a 246-grain round-nose lead bullet at about 800 fps, the Special is mild enough and accurate in good, tight revolvers. Experimentation by enthusiastic hand-loaders vastly improved the power of the cartridge, but those trials also wrecked quite a few revolvers in the process. Once the 44 Magnum revolver was introduced, the need for such heavy loads was eliminated, in our opinion.

That doesn’t mean the 44 Special is dead. In fact, it retains its reputation as a shootable, accurate round, and it finds a home in many 44 Magnum cylinders as a training round. But what of wheelguns chambered just for the Special? Are there powerful-enough loads out there to make it a backwoods-suitable carry gun? A recent test of several 44 Special loads suggests that the old round is rocking along quite well, thank you very much.

Some of the loads tested below are strong loads, probably best used in heavy-duty 44 Magnum revolvers. A 48-ounce Smith & Wesson Model 29 is docile when fired with the Cor-Bon 200-grain DPX load, as an example. Put the same load in the 36-ounce Model 21 Smith & Wesson, and recoil is on the upper end of what most users are able to tolerate. Further, in the Charter Arms Bulldog at 20 ounces, only lighter loads should be used. To assess the shooting-comfort range of various loads, our test guns this time included the Smith & Wesson Model 21-4 44 Special with a 4-inch barrel and the Charter Arms Bulldog with 2.5-inch barrel. This offered a mix of size, weight, and barrel length. We feel that it would have been pointless to fire these loads in a 44 Magnum revolver with a heavy barrel underlug and target grips and declare them controllable. The practical field and carry revolvers used in the test provide a thorough outlook on ammunition selection.

We did not fire all of the loads in the Charter Arms Bulldog revolver. Recoil was a negative factor with this revolver. While the 44 Special Bulldog isn’t going to blow up, the revolver cylinder is strong enough for 44 Special loads, small parts take a beating. The Bulldog may go out of time with a steady diet of anything other than standard-pressure loads. During the test, the action pin came loose and was pressed back in. The Bulldog fills a real need for a powerful and compact revolver, but do not push your luck. Ammunition performance of the loads tested in the Bulldog was not appreciably different than their performance in the 4-inch-barrel revolver. We were able to obtain and test seven loads. Here’s how each round performed.

We bought this load at MidwayUSA.com for $18/20, or 90 cents a round. This load offers interesting performance. Expansion was good, in league with the Cor-Bon DPX and slightly less than the Buffalo Bore load. Recoil is modest, even light, due to the light bullet traveling at 980 fps velocity in the 21-4’s 4-inch barrel. Penetration is adequate at 12 inches. The bullet actually penetrated two water jugs in line but bounded off the third jug. In two instances, the red polymer nose was found beside the expanded bullet, so the nose plug, designed to promote expansion, appears to work as designed. This would be the recommended loading in the Charter Arms Bulldog. At 905 fps in the lighter gun, the FTX retained most of its expansion properties. On a basis of superior personal-defense performance and a fair price, this load gets our Best Buy nod and is probably the ideal urban load for the 44 Special.

We bought this lead semi-wadcutter hollow-point round at BuffaloBore.com for $40.34/20. According to the company’s website, “We developed this bullet to be soft (6 BHN) enough to mushroom at impact speeds around 750 fps, yet we wanted it hard enough (pure lead is 4 BHN) that it would not lead a normal revolver barrel. This bullet accomplishes both requirements. This bullet was also designed with a special crimp groove and the case mouth is heavily crimped, so this bullet will not jump crimp in the lightweight alloy revolvers, provided you rotate the unfired rounds and thus do not expose unfired rounds to the recoil of more than about 10 firings.” While Buffalo Bore also offers a heavy 255-grain semi-wadcutter for animal defense and a 180-grain JHP for hunting, we felt that the 190-grain SWC HP offered the best promise in personal defense.

This is a heavy load that was controllable in the Model 21-4 by experienced shooters, and we did not fire it in the Bulldog. In the bigger gun, the balance of penetration and expansion cannot be criticized. Buffalo Bore takes advantage of the expansion qualities of lead when cast fairly soft. Frankly, we were surprised by the performance. This load penetrated to 12 inches and exhibited the greatest expansion of any load tested at .79 inch. The total front area of the bullet was also the greatest of any load tested. This is the fastest load of the bunch at 1100 fps average, right on the money, with acceptable accuracy. By dropping bullet weight to up velocity and using a well-designed lead bullet, Buffalo Bore has produced a load with the best terminal ballistics in the test. Recoil was not a problem in the Smith & Wesson revolver. The best performer is pricey.

We bought this round at MidwayUSA.com for $17.50 per 20 rounds, or 87 cents a round. This load was rivaled in accuracy only by the Fiocchi 200-grain JHP. We thought it offered good control of the firearms. The 180-grain XTP is loaded to 887 fps and seems well suited to all revolvers. If greater penetration than the FTX is needed, the XTP load is recommended in the Bulldog. If control is at a premium, then this load is worth your consideration.

The 180-grain XTP penetrated a solid 18 inches of water and expanded to .52 inch diameter. For some, the superior penetration of the XTP will be more appealing than the expansion of the Critical Defense load. The XTP is accurate and affordable as well. We rated it down half a grade on expansion, which probably aided its greater penetration. This is the most accurate load tested. For use in either revolver, this load is a good all-round choice.

We bought the CCI load for $42.50 for 50 rounds, or 83 cents a round, at MidwayUSA.com. At the same place, we bought the Speer Gold Dot for $1.44 a round, or $29/20. Because they both used the same bullet, we considered them together, which left us in a quandary. The aluminum-case Blazer load is offered in 50-round boxes and is generally regarded as a practice load. Primer seal and cartridge integrity may not be the same as the brass case Speer loading. However, the Blazer load was a full 45 fps hotter than the Speer Gold Dot loading. Accuracy was acceptable to good, and the Blazer averaged 13 inches of penetration and expanded to .70 caliber when shot from the Model 21-4. Performance was slightly degraded in the Bulldog revolver. Still, this load is acceptable for personal defense.

While none of the Blazer Gold Dot loads failed to expand, expansion was the least consistent of all loads tested. Some expanded well, some expanded, but not as well as the others. To our eyes, the Hornady FTX is nearly as affordable and expanded more, but Gold Dot fans will find much to love in the 44 Special Blazer load. The brass-cased Speer product looked to be a step behind the less-expensive Blazer version with a Gold Dot bullet — not what was expected. We knocked the Speer down another half grade below the Blazer because it cost more and deliver less, in our opinion.

We bought these at MidwayUSA.com for $38/20, or $1.90 a round. This solid-copper DPX bullet expanded in the classic fashion. Penetration was deepest of all loads, save the Fiocchi load, which did not expand. The Cor-Bon DPX penetrated 18 inches of water and came to rest just inside a fourth jug. While the power factor of this load and the Buffalo Bore load were similar, the Cor-Bon kicked noticeably harder. This was the hardest-kicking load of the test. This load combines excellent penetration and expansion. We rated this load down on price and recoil.

We bought this from MidwayUSA.com for $32/50 rounds, but Midway no longer stocks it. This mild-mannered load hedges the bets and is safe to use in any 44 Special revolver. Even in the Bulldog, this load was docile. Accuracy was excellent, and the load demonstrated a full, clean powder burn. However the 200-grain JHP appears to be the same bullet used in the 44 Magnum loads and will not expand at 803 fps. The bullet sailed through 24 inches of water without expanding. We finally caught a bullet in the berm. This load is affordable and accurate, but there are better choices for personal defense. At $32 for 50 rounds, we feel this is the best practice load and most economical. The lack of expansion pushed the load’s rating down. It is a best buy contender for practice use.

The Buffalo Bore load maximizes the cartridge, we felt, and was well suited to the heavier revolver. While there were good loads tested, in the end the best all-round loading is a matter of personal choice. The Hornady 165-grain Critical Defense is the top load in the lighter revolver and a contender in any 44 Special. The Hornady 180-grain XTP offers a good mix of control, expansion, and penetration and would also serve in either revolver.

The Cor-Bon DPX is a good load, but recoil is heavy. The Speer Gold Dot is readily available, and the 50-round Blazer makes for real economy. In the tradition of the 44’s light recoil, the Fiocchi load is pleasant to fire and affordable, but doesn’t offer great terminal performance. One thing for certain: If you carry a lightweight 44 Special such as the Charter Arms Bulldog revolver, then you must choose loads carefully. The heavier loads might quickly turn the Bulldog into a rattling wreck, and for our shooters, were uncontrollable to fire in this light revolver.

Higher-Retention Holsters: We Test Seven Candidates for You