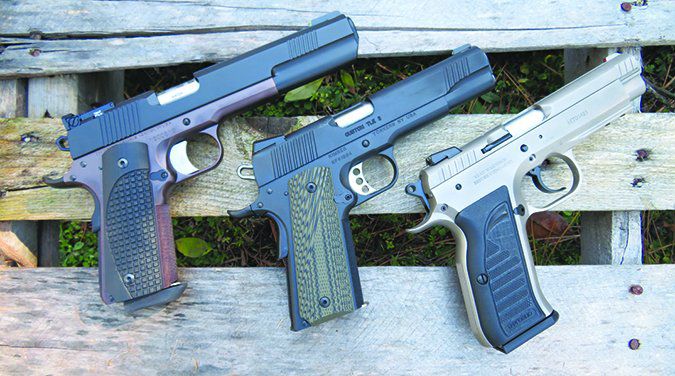 Neat comparison of 10mms; kinda hoping you’d toss the SIG P220 in 10mm into the mix. I thought your comments on the Kimber TLE II grips were interesting. I haven’t shot that model, but I own a Kimber Custom Eclipse II in 10mm and have no such issue with my grips when firing up to 100 rounds in a session. For those who would like the edges less raspy, I use blue buffing on a buffing wheel mounted in my drill press to polish out G10 revolver and knife grips. It’s not too aggressive, and you could take a little edge off without substantially changing the grip’s appearance. Clean up with a little denatured alcohol and a toothbrush and you’re ready for the range.

“The P220-10 is a refined and substantial pistol weighing in at 52.4 ounces with a loaded magazine. The weight really helped to reduce felt recoil, as our testers soon found out. It uses a full-mass slide to help combat recoil. Other P220 slides have lightening cuts, depending on the model variant. Out of the box, the Reverse Two-Tone Stainless finish was impeccable and looked sharp with the green toothy G10 Piranha grips. In hand, the SIG did not have the girth of the Glock, which felt chunky in hand and was harder for shooters with small hands to control. The RIA had a similar girth as the SIG due to the grip panels, which could be adjusted with aftermarket grips but at an additional cost.

“The SIG is traditional, using a double-action/single-action trigger. The first shot is fired DA with a long smooth press followed by SA mode. Both trigger modes were crisp. DA pull averaged 8.6 pounds but felt lighter, and SA was 4.5 pounds on average. Located on the left side of frame was a decocker; the only manual safety on the pistol that safely decocks the pistol from SA to DA. The SIG also incorporated a firing pin block. The pistol will fire with the magazine removed. A loaded-chamber indicator tells shooters a cartridge or a case is in the chamber. Field stripping does not require tools and is fast.

“Our Team Said: This is more of a hunting pistol because it was large and heavy for concealed carry. We would own one of these in a heartbeat — except for the price. So for those readers who don’t want us to factor money into the grade, just buy this one.”

I would like to see tests of pistols that come from the factory with red-dot sights. In particular, it would be interesting to see how the SIG P320 RX full size compares with the SIG P226 RX SAO. SIG makes the Romeo 1 red-dot sights and sells them on the pistol. I like the idea of having only one vendor involved if there are problems. I think Springfield, Glock, and Smith offer guns with attached red-dot sights from other vendors. So which rig works the best and are they any better than iron sights?

A question I have is about magazine-release controls. Yes, I want to be able to change magazines quickly, but I also don’t want to bump the magazine release inadvertently and cause a malfunction. It seems there is a trade off. In a self-defense situation, I want the magazine to stay in so the gun will function.

I think your magazine is one of the few places that I can get accurate unbiased information. I like the facts that are presented, but the opinion of your experienced gun guys is the most valuable.

We have taken steps toward this already with the July 2016 article, “Optics-Ready: M&P9 Ported, FNX-45 Tactical, G17 Gen4 MOS.” But you want the sights included as well. Consider “Red Dots: Straight Outta the Factory” to be on the development list. Great idea, and thanks for sending it.

Please test MechTech Systems’ conversion for pistols that changes 1911, XD, and Glock pistols into short carbines resembling the AR-15 in appearance. If it works, it would provide an effective carbine in 9mm or 45 ACP, which I have long thought would be an useful carbine in those calibers. Years ago, Marlin put out the 9mm Camp Carbine, but it was a blowback type, depending on the weight of the bolt and the strength of the recoil spring to keep the bolt closed during ignition. Please research and test the MechTech pistol conversion.

Hey David: Good news—we’ve already looked at one MechTech product in the June 2012 issue. That particular item was a MechTech Systems Carbine Conversion Unit for Glock 9mm, $505 at the time of the test. Here’s part of what we said about it:

“This is a different piece because it isn’t a firearm at all but a conversion unit. While more complex than a .22-caliber conversion unit and the like, it is a bona fide accessory rather than a firearm. These conversions are available for the 1911 and the Glock, and we chose the Glock 19 9mm conversion for our test.

“By removing the slide of the Glock and fitting the receiver into the MechTech conversion, you have a light, handy carbine. When assembling the Glock conversion, it is vital that a piece known as the Glock Block be included. This piece ensures reliable feeding and takes the place of the Glock’s integral feed ramp, once the barrel is removed along with the slide from the original pistol. In common with the 1911 conversion, there was no manual safety.

“The carbine was simple to set up and greatly increased the practical accuracy and hit potential from that of the handgun.

“The MechTech conversion is an interesting option that adds to the utility of the Glock pistol without any legal wrangling. No paperwork was involved because it is not a firearm. The base price was reasonable, in our opinion, for such high quality. But adding a fixed carrying handle rear sight, post front sight and adjustable stock did increase the price of the conversion over the base unit’s cost.

“Our Team Said: This was a good conversion, but the result was less practical than our other test guns, which were full-time carbines. However, for what is basically a gun part to win a B rating against a purpose-designed carbine such as the Thureon was, in our view, most impressive. If we were comparing conversion units, this one would get a solid A+. The MechTech Systems Carbine Conversion Unit for Glock is one accessory that is difficult to ignore.”

Re “Browning’s Sweet Sixteen: Still Sweet After All These Years?” May 2017

I picked up a Light 12 about six years ago from the used rack at Cabela’s in Wheeling. It was only $400, older than the one you tested, and I wanted it because it was a Browning design (the same reason I have a 1911 and a Hi-Power). Shortly after I got it home, I looked into removing the gizmo attached to the end of the barrel, a Poly Choke, until some research revealed I would have to have a smith do that for me, and that the choke was actually functional, useful, and probably cost a previous owner about $100 installed. I downloaded the manual for the gun and the Poly Choke and added a slip-on rubber recoil absorber, more to increase the length of the stock than for its intended purpose. I have more suitable guns, purchased new from Ruger and Guerini, for birds and clays, but I have taken the A5 afield a few times, particularly when it was wet, cold, and messy. One freezing-cold day while out for birds on a preserve, the gun would not cycle reliably when I took two consecutive shots at the same bird (and both missed). There is a ring that slides on the magazine tube and, according to the manual, it makes a difference which way one slides it on (it goes on under the spring, I think), according to the heaviness of the load being fired. After that occurrence, I made sure that ring was oriented for lighter loads and kept everything very clean and fully, but lightly, oiled. It’s functioned perfectly ever since, allowing my new stepson to take his first bird.

I thoroughly enjoyed your article on the vintage Sweet Sixteen. I was fortunate enough to find a 1956 vintage gun at a gun show about 40 years ago. It was the best shotgun purchase I ever made. Mine has a vent rib and a Modified-choke barrel. I installed a recoil pad to make it fit me. This has been my “go to” dove and quail gun ever since. It has filled many a limit of both gamebirds over the years, and I don’t remember ever having a malfunction. I just clean it at the end of each season and go out the next year and do it all over again. I fully understand why no one would loan one to you for your tests. I would never let a stranger shoot my “baby.” I intend to pass it down and keep it in the family. Keep up the good work!

James and Mike’s satisfaction with their A5s tells everyone else why their prices in the used market stays high.

In regards to the Texas reduction in cost for a License to Carry—please do not attribute this in any way to the Trump administration. (I assume that from Trump’s campaign promise of “getting tired of winning”). If so, you must also attribute the cost rise from $70 to $300 for both the initial and renewal cost for a License to Carry in Connecticut, where I live. Just be thankful you live in a Free State.

Pete: I am very thankful. —tw