I second the letter on women over 50 looking for a good carry weapon! As I read the letter, I was like, check, check, check! I’m 51. I’ve had a permit for more than 20 years. I’ve owned a CZ 75 P01 9mm for many years, and it’s an excellent weapon, but I’m looking to downsize. I’ve carried IWB at small of my back, and carried in various places around my body using a Gun Goddess Hip Hugger Holster [illustrated below]. I’m interested in staying in a 9mm, single stack, like the CZ, but want to go smaller and lighter. My top interests include ease of slide operation and a balance between weight and recoil. I appreciate you including retraction effort in your reviews. I do not have great hand strength.

I read with great interest the October 2019 write-up of small 9s, and I liked the looks of the Beretta APX Carry, plus it’s made locally, one county away from where I live. I would like to see a test of a similar-sized guns from Springfield and SIG. I rented an M&P Shield last year, but I didn’t really care for it, and it was still a little too big.

I am also trying to decide if I want a safety or not? The CZ does not have a safety, but it has a rather strong decocker with an exposed hammer, and I’ve always felt safe carrying it that way. I’m unfamiliar with the Beretta set up (striker block safety? trigger safety? Never had those). I really need help deciding — COVID interrupted my shopping! I’m hoping to see some pistols soon get restocked in my local gun stores. 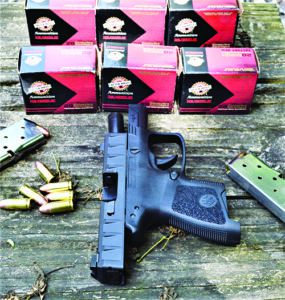 Thanks for considering this point of view in testing some additional carry pistols in the near future. I can’t wait to see what you find. I really appreciate the work you all put into testing.  — Ann

Hey Ann: Thanks for your comments. I’ll see what we can get going with some small 9mms, including offerings from Springfield and SIG if they match up. — Todd Woodard

Read the post by Vincent on “Women of a Certain Age Carry.” I’ve been an RSO and instructor to “The Well Armed Women” chapter in my town since they started five or six years ago. I would venture to say that a large percentage of the ladies are over that magic number of 50. Like all new shooters, everybody needs help and training in safe use of a weapon. I think our chapter has helped them find the correct handgun by letting them try ones that the chapter president and husbands have, along with the RSOs. We show them techniques for racking a weapon if it is too much for them, but prefer they select models that are more easily racked. With our “try before you buy” of our personal collections, they usually wind up happy. We also have classes on cleaning and maintenance and give them lessons on the types of weapons and various types of ammo. I’ve even held classes where I had most handgun rounds and rifle rounds in component state (shell, brass, powder) where they could get some idea on what makes them go boom.

We have women firing everything from 22 LR up to 45s and wheelguns in 38 Special/357 Magnum. Really wouldn’t want to tick off the majority of these ladies upset. I am guilty of trying to ween the better shooters off their inexpensive 380 ACPs and 9mms that kick a tad by letting them try my SIG P238 and P938, which have less recoil and are more accurate.                — Dr. Fred

This sounds like an awesome program. Congrats to you and the other local gun owners who help female shooters get lined up with the right guns for them. You’ve hit on the only effective way to choose a personal firearm, and that is to handle and shoot it. — tw

Congrats on finding and testing a Federal Ordnance “Tanker” Garand. In early 1992, the “assault weapon” ban was looming (it passed in 1994.) I saw the Garand as the next premier self-defense rifle. It had none of the Evil Three features: a detachable magazine, a pistol grip, or a threaded muzzle. Plus it’s reliable, powerful, and common, meaning there’s lots of spare and aftermarket parts as well as expertise on how to outfit them. So I ordered one in 308 Win. from the LSG in early 1992 and never regretted it. Having shot an M1 Garand in High Power competition, it was a natural and a candidate for the perfect truck gun. In Ohio, it’s illegal to have a rifle and loaded magazines in your vehicle. But the Garand’s en bloc clips are okay.

Unable to find a Bell and Carlson synthetic stock, I replaced the wood with a Ramline unit. After years of use, I’ve had no problems and no issues with dents, etc. I added an Olangapo Outfitters stock-mounted clip pouch to carry two loaded en bloc clips, securing it on the QD sling mount. Plus, the “tanker” responded to all the standard accurizing procedures as match Garands. Installing my match-tuned trigger group gave me a beautiful, crisp 4.5-pound trigger. (The Garand was retired from competition when the AR-15 became a viable platform.) 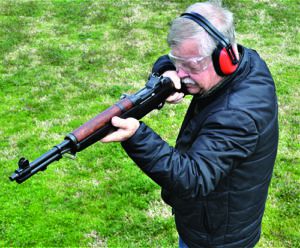 However, test-firing the “tanker” at dusk revealed a large fireball with both M80 ball and soft-point reloads. A buddy’s in 30-06 (USGI surplus) was a bit more intense. Replacing the gas cylinder lock with a Smith Enterprise Garand muzzle brake eliminated the low-light muzzle fireball. OK, it made the gun about 2 inches longer, but I find the extra length unnoticeable and the brake does not affect handling. I was lucky — my SE muzzle brake hand-tightened to about 5:30 and needed just a light tap to snug it properly at the 6 o’clock position. (The SE muzzle brake may require fitting.) A quick check revealed the muzzle brake and barrel were aligned correctly. Done.

I did not need to open up the peep sight. The shorter length of pull put my eye closer to the peep, thus making the hole appear larger. For truly fast work, I would open it a bit. But for everyday or hunting use, it’s fine as is.

However, I intended to make this a Tanker Scout. Unfortunately, neither the Amega nor Ultimak mounts would fit without extensive machine work. The 308 barrels (at least the early ones) Federal Ordnance installed were very thick under the rear handguard. Not sure about the 30-06.

Bottom line: A “tanker” Garand gives up little to today’s MSRs and, at least for some of us, is the perfect truck and/or house gun. Remember, time has been kind to us, but the next MSR ban is just an election away. — Tony

There’s a lot to recommend folks buying and shooting M1As. The platform continues to improve, even though its military service life concluded decades ago. — tw

I am behind on reading Gun Tests. I have had to read 22 books so far this year for various reasons, besides my normal work as an editor. So these comments are way slow coming to you. I just have to say your articles this year are superb. The history on the 308 rifles in April, the history on the 1911 in May, they are just interesting and useful to me. All of that info is so good and well presented. And I am just starting the 1911 article this morning. I hope to catch up to June by the end of the week or so. The article on shoulder holsters is so useful, and I am not even interested in buying one. But the helpful info on hitting the gun on tables, the gun sagging forward when you lean over, all of that and all the rest helps me understand all carrying problems better and helps me think of ways to solve IWB problems that I do have. It also helps me answer questions much more fully when my kids or friends ask me what I think of the options. And I always tell people where so much of what I have learned came from — Gun Tests.

One of my sons just took out a subscription before he made purchases. He wanted to see all the back tests after I started telling him about your tests, that you fail guns, that we needed to check the reviews. He couldn’t wait for me to get done with work to look in the archive, so he subscribed. I hope others have subscribed as well. You are running a very good ship, and I make serious efforts to spread word-of-mouth advertising for you.

One article suggestion, and this may take some serious effort and expense. Could you compare accuracy shooting trainings from the different schools of thought, and tell us what you think of each? I have been to Front Sight in Nevada twice for their handgun defensive course. I cannot tell you how much that improved my shooting, to look at the front sight, and I think the isometric tension idea works, but if you have to shoot one-handed, you can’t really do the tension. I have read articles about stance that say different things. I would love to see a comparison article of stances, grips, posture, sighting, and pulling the trigger. I would like this comparison on rifles and shotguns too, so maybe this is a three-article suggestion.

For example, on the grip. I heard about a pro pistol shooter here in Utah, not a champion but top 10, who had 90 pounds of grip strength. I know another shooter who was a college champion rifle shooter who was so strong he would kill a deer, clean it, then take the front legs in one hand, the back legs in the other, and just pick up the deer, set it on his shoulders, and carry it out that way, no matter how far. He backpacked with 60 to 90 pounds on long deep hikes into the Uintas and Windrivers. I shook hands with Billy Casper once, a pro golfer here in Utah, a champion and very successful. I thought he could squeeze blood out of the end of my fingers if he wanted to. Do all champions need grip like that?

When I met Casper, I could do 10 chin-ups easily; 10 pushups on my fingers (I was 6 foot, 200 pounds); hauled hay all day by hand, probably 500 tons a year, lifted it onto the trailer, then onto the stack, and then onto the sleigh to feed in winter; pounded all nails with hammers; shoveled all manure, grain, and snow with a shovel, not a loader; and split all wood and cut most posts with an ax, a few with a hand saw. We did everything by hand on our farm in Idaho. We even bored most holes in wood with a brace and bit, not a power drill. But I had only a 60-pound grip, and I could not have squeezed anything as hard as Casper. Does grip strength matter for champions? Is strength more important than isometric tension? How much?

I hope this makes sense. But I again especially want to compliment you on the content: simply superb stuff. — Don

Thank you for the kind words. Offhand, I can’t think of a sport, with or without firearms, that can’t be improved with specific “strength” factors, even smallbore rifle prone or air pistol. We’ll discuss the articles. — tw