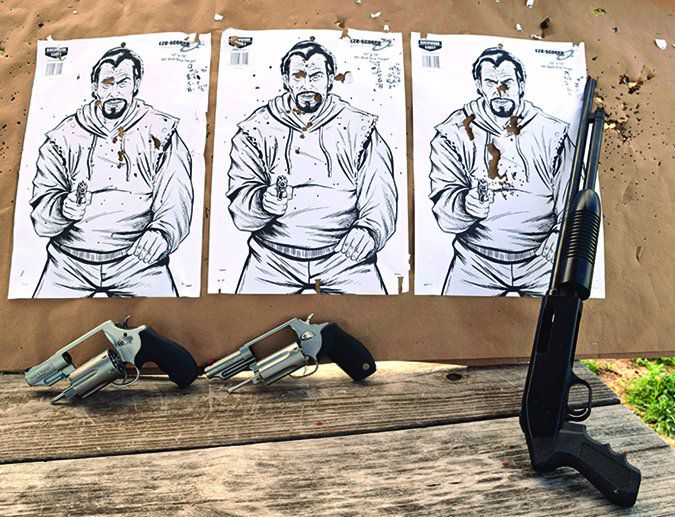 Editor: I read with interest your article about .410-bore ammo tests. Your pictures clearly show that the 45 Colt expands far better than the 45 ACP! The gun manufacturers are asleep. They should make a 45 Long Colt revolver with 4-,6-, and 8-inch barrels. Bet this would rival the 357 Magnum in knockdown power without the recoil!

Todd and Company, Greetings! I have been a subscriber for several years now and just wanted to write and say thank you for all that you do. The magazine is a great resource and has, in my view, unmatched and unbiased consistency, with testing criteria. I also like that your firearms-test articles have ample technical data for the professional, but are written in such a manner that even the novice gun enthusiast can understand them and learn from the reviews.

I especially look forward to reading Downrange, in which you cover current events relating to firearms, gun owners, the Second Amendment, politics, etc. All in all, it’s a great package and a superb value, and I plan to subscribe until the end of time.

Love your mag! Now, thanks for the update on the surplus 1911s. However, you left out the who/what/where/when/why of obtaining one. I know your letter stated they “might be back,” but I would like to know when this might be approved and what the process is. Even an educated guess on when/where to look would be appreciated.

Hey Andy: The first paragraph said the pistols might be available through the Civilian Marksmanship Program. According to the website, theCMP.org, “The Civilian Marksmanship Program (CMP) is a national organization dedicated to training and educating U.S. citizens in responsible uses of firearms and airguns through gun safety training, marksmanship training and competitions. The CMP is a federally chartered 501(c)(3) corporation that places its highest priority on serving youth through gun safety and marksmanship activities that encourage personal growth and build life skills.” So, navigate to theCMP.org page, select the “Sales” tab, and you can see what the agency offers in terms of firearms, including the possibility of 1911 sales included in an amendment passed with the FY2018 National Defense Authorization Act (NDAA). But when I spoke to a highly-placed NRA official on October 4, he said that because of the Las Vegas shooting, Congress planned to pull back any pro-firearms legislation for the rest of this year. — Todd Woodard

Sirs, I am a two-tour Vietnam Vet and a retired (25 years, 1973 to 1998) municipal law-enforcement officer. In addition to a BS in Criminal Justice Administration I have attended eight (8) different Armorer Schools as well as a number of shooting schools, to name only a few, Gunsite, Chapman Academy (3 times), FBI Academy, LFI (attended several and assisted as a range officer in several), S&W Academy, etc. I was in charge of firearms training for my agency for 22 years, and for the Northwest Arkansas branch of the Arkansas Law Enforcement Training Academy (ALETA-NW) for five years. I said that to say this:

This is not a criticism of your magazine, just the result of some experience beyond your testing. In 1995 I and another firearms instructor attended the Beretta Armorer Training Program in North Little Rock, Arkansas. Consequently, I purchased a Beretta Tomcat DA 25 ACP semi-automatic pistol. My friend also purchased one and sold his to me unfired. I still own both pistols. The FBI called having DA for the first shot “First Shot Liability Insurance,” and I agree with them. The concept of the tip-up barrel appealed to me as a safety feature in loading and unloading. However, as with many things in life, experience taught me that there was a trade-off.

The Beretta does not have an extractor. I had several brands of ammo, but a problem developed with the American Eagle ammo (purchased a case in 1976). When fired, the cartridge case of two or three cartridges per magazine would split, and then the split case would not extract (no extractor) or eject. The split case would be stuck firmly in the chamber, requiring that the split case be pried out or a rod be inserted from the muzzle and the case pounded out. I have not fired all of the brands of 25 ACP ammo on the market, but I do recommend that if one intends to carry the Beretta in a serious way, that one fires enough of the duty ammo to be really confident in its reliability!

On December 21, 1975, an officer from a local municipal agency was abducted on a road stop, handcuffed with his own handcuffs, taken to a secluded area, and shot in the head with his own 357 Magnum revolver. Shortly after this, I and another officer purchased Fraser 25 ACP Autos, a stainless-steel copy of the “Baby” Browning. We had short-recoil problems, and the magazines were crap. I replaced the recoil springs and magazines with parts for the Browning 25 Auto, and thereafter, we had no problems. I carried that pistol in a wallet for the rest of my municipal law-enforcement career and I still own it. It is very accurate. I can keep all shots somewhere in the black of a standard B-27 target at 50 yards, and although some cases did split, they were all extracted because the pistol had an extractor.

I also own a North American Arms 22 Magnum mini-revolver with a second cylinder in 22 Long Rifle. I aim it by setting the front sight on top of the rear of the frame, sort of like shooting a shotgun with a bead sight. It is a quality firearm, in my opinion. The second cylinder in 22 Long Rifle will also fire 22 Long and 22 Short cartridges, which means that one tends to fire it more often than one would if only 22 Magnums could be fired.

Lt. Lott: Thanks for passing along those insights about these smallbore firearms. — tw

Re “Worth the Money and Trouble? A Trio of Unusual Revolvers,” September 2017

Sirs, I am a many-year subscriber, and having just read your article on “Unusual Revolvers” in the September 2017 issue, I noticed — again — that you selected Remington “Thunderbolts” among the 22 ammo to test in your firearm. Over the years, whenever you have tested a 22 rimfire rifle, pistol, or revolver, you have frequently chosen to test it with Remington ammo, typically Thunderbolts or Golden Bullets, among others. Based on my own experience and that of many others, reflected on hundreds of reports on RimfireCentral.com — the most authoritative source of rimfire information on the web, or anywhere else for that matter. It reflects the experience and knowledge of many thousands of rimfire enthusiasts — you could make far better choices! And that doesn’t necessarily have to include Eley Match or Tenex, or Lapua Midas. CCI, Federal, SK, and Wolf, for example, all offer much better options at reasonable prices.

On RimfireCentral.com, Remington rimfire ammo is viewed (with rare exceptions) as the poorest ammo one could choose, with an unacceptably high rate of “duds,” e.g., failure to fire and/or obvious wide variance in velocity shot-to-shot. Net, net, unreliable, inconsistent, and inaccurate, as well as dirty. Thunderbolts are usually referred to as “Thunderturds”; Golden Bullets are not viewed any more favorably. While Remington may make some quality centerfire ammo, it seems their attitude towards rimfire is that the lowest common denominator commodity is good enough. Certainly, many people who shoot 22s for plinking only don’t know and don’t care — they buy the cheapest stuff they can get. I don’t think that is what Gun Tests is all about. On a different but related point, I’d like to see more tests of rimfire firearms — there are many out there — but without Remington ammo included.

Hey Doug: Thanks for passing this along, and I take your point. Oftentimes, we select ammunition simply based on what retailers tell us are the top-selling brands by volume. So, those low-price brands you mentioned keep reappearing because they are what people actually buy, warts and all. From our perspective, it’s a win-win. If a brand of ammo malfunctions or is in accurate in all of a set of test guns, then the ammo gets called out as crappy. If it only malfunctions or doesn’t shoot in a particular gun, then we’ve found an anomaly that is likewise worth reporting. — tw

First, simplify your grading scale to into just three categories: Especially Good, Good Enough, and Buy Something Else. Of course, everyone would prefer the standouts, but knowing which guns are also worth considering — and which aren’t — is good information to have. This really is the bottom line, and it avoids the temptation to give a slightly higher grade to the gun that is most satisfying so it wins the test, even if all the guns basically behave and shoot the same. The author’s personal favorites can be discussed in the write-up. This also makes it much easier to compare results from different articles.

Second, I would like to see Gun Tests put more emphasis on cost when comparing guns. For example, in the July 2017 edition (“American Made Nines”), a $1220 Springfield 9mm was tested against a $499 Honor Defense and a $579 Ruger. No surprise, the Springfield got the only A. But at twice the price, it should be the best. I have to wonder if the second runner-up, which got a B+, would have received an A if it wasn’t being compared to the Springfield. Of course, it’s interesting when there’s a modest-price gun that keeps up with the expensive guys, but when I’m researching a purchase, I have a budget and I’m looking for guns in a particular price range. The most useful reviews for me are those that help identify which of those guns I should be looking at; comparisons to guns in other price brackets aren’t that helpful and possibly skew the results. I recommend that when devising your tests, in addition to pairing up guns by purpose or feature, you include the criterion of broadly similar price: High-end, average, and budget. All this is grist for your mill, so I hope it helps. I do appreciate the work you and your writers do, and wish there were more like you.