Women and Youth Girls: Which Shotguns and Which Loads?

Hi, here in Minnesota, there exists a very successful State High School Trap and Skeet League. Grades 6-12, 300+ schools and last I read 8000+ students. Was wondering if you’ve ever thought about evaluations of shotguns and loads for the slightly built kids. I know some use a 20 gauge and 7⁄8-ounce loads. It’s a lighter gun, but I’m thinking the recoil might be about the same as a 12 gauge shooting 7⁄8-ounce loads. My granddaughter is now 12 and is getting her Minnesota firearms-safety training certificate, and I’d like to buy her a shotgun. Both for trap/skeet/duck. Any recommendations? I haven’t found any yet on the MNClayTarget.com site, but I’ll be emailing them, too. Thanks very much!     — Teri

Hey, Teri, thanks for asking. We’ve tested several shotguns that might be worth considering, depending on exactly how “slight” your granddaughter is. One of the best is likely the CZ 720 Reduced Length Shotgun No. 06039 20 Gauge. It is a gas-operated semi-automatic built on an alloy receiver with Turkish walnut forend and stock. It is the product of the Huglu plant in Turkey. The 720’s 24-inch barrel was chrome lined with a black, hard-chrome finish on the outside. The barrel was topped with a vent rib that was scored laterally with fine lines to diffuse glare. Our 720 was fit with a rubber buttpad that was only about 0.4 inches thick at its center and the heel, or top of the pad, was fit with a hard cap. This is often referred to as a Sporting Clays design. Pachmayr sells a similar pad and calls this feature the Speed Mount Heel because its smooth surface helps the pad slide into position rather than catch on clothing. Nevertheless, we can report that the 6.2-pound CZ shotgun seemed to shoot with the least amount of recoil when compared to our other shotguns. Our junior shooter preferred the CZ 720 Reduced Length shotgun because it “kicked” the least and seemed to offer the most natural flow. Also, the Mossberg 505 Youth Pump-Action Shotgun 57110 20 Gauge is an overlooked gem. Another version of the shotgun has an adjustable synthetic stock with inserts at $406. The fit wasn’t bad for most raters, and the pump action with the EZ Reach forearm is very fast. The rib, dual beads, and choke tubes were pluses. When capacity, reliability, and versatility are considered, the Mossberg is a winner. Also, we’d just ask around. Other shooters will likely offer recommendations that have proven themselves, and maybe even let your granddaughter try them out. Hope this helps.  — Todd Woodard

I am interested in single-shot 12-gauge shotguns for bug-out guns. There are a number out there. I discovered the $99 deal that Wal-Mart sells. I have read some good reviews about it. Then I discovered the Midland Backpack single shot [shown above], which seems to me to be a better buy. For $149, you get all the things you would probably add to the Wallymart gun. Now Classic Arms and others are selling an $89 version made by ATI. These are all imports because the American Savage and other brands are gone. Have you reviewed these single-shot guns? If so, could I obtain a copy of the review? If not, would you consider doing a side-by-side test?I think it would be interesting. Not all of us can afford (or now legally keep) an AR-15-type weapon, but there is great utility in a 12-gauge single shot for hunting and limited self defense.  — Anthony

We have tested single shots in the past, but not for this specific use. Thank you for the idea. — tw

As an Ear, Nose, & Throat physician, I see patients daily who suffer life-altering sensorineural hearing loss (SNHL) from shooting with no hearing protection or with inadequate hearing protection. So thank you for publishing this very applicable article!  The last statement, however, is cringe-worthy: “We’d recommend using ear plugs in indoor ranges when shooting an AR-15 or magnum revolver.” I would implore all the readers of this excellent magazine to always use both plugs and muffs. The combination is much more effective at preventing SNHL, and even the most expensive combination one could afford is thousands of dollars cheaper than hearing aids. A brief explanation follows for those interested.

In the beginning of your article you accurately write that one-time impulse sounds of 140dB or more can permanently damage hearing. Additionally, prolonged exposure to sounds over just 85dB can cause hearing loss. You also wrote that loud gunshots can easily be over 160dB. The test performed on the effectiveness of the test electronic ear muffs used 15dB as the minimum level of protection. That would give a best-case scenario of 145dB of noise, which is enough to cause permanent hearing loss with just one exposure! Surprisingly to some of us, the meager 22 LR pistol has a report of about 140dB! Realistically, most of the muffs tested have a Noise Reduction Ratio (NRR) of at least 23dB, yielding an exposure level around 140dB with louder firearms.  (This is overly simplified math, as the amount of decibel reduction doesn’t really equal the difference, but for illustration sake, we’ll skip the logarithmic math that I forgot years ago.)

The highest NRR available in muffs is 31, while the highest NRR in plugs is 33.  Combining them does not yield an NRR of 64, but more like mid-30s to 40. While my audiology friends will say that still doesn’t yield enough protection to prevent hearing loss with long-term exposure, the combination is certainly more effective than either by itself. Your choice of electronic muffs is excellent, as they allow communication with plugs in. In summary, instead of an apple a day to keep the doctor away, please always use both plugs and muffs to keep the hearing aids away, even when outdoors shooting “quieter” guns. I love your magazine. Please keep up the good work. — Justin

Thank you very much for the insights. A word to the wise is valuable, if the recipient can hear it. — tw 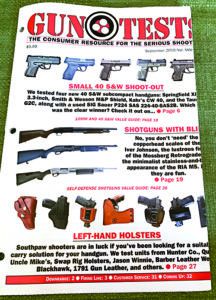 Hello, first I love your magazine! I have been a subscriber for many years now and always love reading it. My problem is, some time back you changed the paper Gun Tests is printed on. Since that change, I don’t think I have received one copy that is not damaged. They’re usually torn or part of covers are gone. I didn’t have a issue with this before the change. I don’t know if anyone else is having this problem, but I wouldn’t be surprised if they were. Maybe shipping in some type of envelope would help. Anything you can do would be greatly appreciated because I keep all my copies in binders for future reference.    — Jonathan

Hey Jonathan: Sorry this keeps happening. The paper has been glossy for several years, so it displays color better, but I can’t think of a reason for it to be less durable as a result. But any time you have a problem like this, call customer service at 1-800-829-9084, or email Customer_Service@GunTests.info, and we’ll get a new one on its way. — tw

I see in your article you noted that a red-dot sight may help with visual acuity. Last year I attended a seminar for older shooters at the NRA Annual Meetings. Dr. Joe Logar pointed out that for older eyes, green lasers are preferred over red lasers. The red lasers tend to disappear in bright light as compared to green lasers, and the green spectrum is easier for older eyes to acquire than red. After the seminar I bought a green laser to replace the red laser on my carry gun.       — John

Thoroughly enjoyed the small 40 S&W article. I had suggested it long ago. Very pleased to see that the Springfield was your pistol of the year also! I had to go buy one, especially since this was the gun I was most interested in.

In regards to your electronic earmuff comparison article, I enjoyed it, and I ended up buying both a Walker’s Razor Slim and a Howard Leight Impact Sport pair. I wanted to give you my 2 cents worth. My H-L muffs had some hiss in the left ear even at low volumes, whereas the Walker’s did not. The Howard Leight pair seemed to give me a little better sense of where a sound was coming from, and from what angle, which could be very advantageous in hunting.

My chief findings are related to me being more of an audiophile. I played MP3s through both of the headset inputs, which was not mentioned in your review. Observations: The Walker’s had a much clearer sound, with rich bass and fuller dynamic sound than the H-L. In addition, the Walker’s played using only the power of the player, thus saving battery power of the muffs themselves (it appears). The H-L, on the other hand, enables the volume to be controlled by the headset, but it does use batteries. As for me, I’d recommend the Walker’s for the better sound quality and possibly better battery life.  — Frank

Yes, thank you for the 40 S&W article idea back in May 2018. We really do create line-ups based on readers’ interests, though it may seem to take forever to appear. We also appreciate the follow-ups on hearing protection. — tw