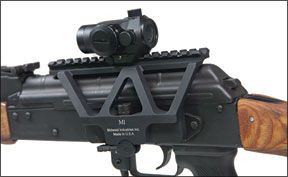 My WASR-10 does not have the muzzle brake. It won’t mount a bayonet since a part of the lug is ground off. The iron sights were a real challenge since, when aligned, there was no white space on either side of the front post. I filed a V groove in the rear sight so I could see and use the sights. Three of us shot 14-inch groups at 50 yards, but it was really a lot of fun to shoot. I have the scope mount and will try shooting with it. Hopefully, I can tighten up the groups with a scope. — Mike

No question, adding an optic is a huge advantage to accuracy. You can’t hit what you can’t see. — John Taylor

National Legal Defense I just received the June issue of Gun Tests, and I saw one minor error in your fine magazine. I am a member of Texas Law Shield, and I visited their booth at the NRA convention. I noticed they are now calling themselves US Law Shield. I asked them what the difference was, and they said they are (or had) gone national, hence the name change. — John

Texas residents are members of Texas Law Shield. I do have the multi-state option in my TLS membership. But, yes, the group is expanding nationally. The Law Shield groups provide legal representation for both criminal and civil actions resulting from legal gun use. The concealed carrier pays an annual fee, usually around $100 a year. I don’t want to be involved in a self-defense shooting, but if I am, it’s nice to know I have representation on retainer. The most important advice they’ve given: If I’m involved in a self-defense shooting, I will not speak to police without a lawyer. — Todd Woodard

In the July issue of Gun Tests, you compare the effectiveness of the 22 Magnum against the 32 H&R Magnum. Your two loads of 32 Magnum, both 85 grains, had average velocities of 1080 fps and 1122 fps, and didn’t deliver twice the performance versus the 22 Magnum. I suggest you check out Buffalo Bore’s 32 Mag. ammo. I am looking at two boxes: 130-grain hard-cast Keith at a claimed 1125 fps and a 100-grain JHP at a claimed 1300 fps. I suspect either one would be a major improvement over the Black Hills and Federal ammo you tested.
— John Ashjian,
San Antonio, Texas

You guys really hit home for me with the 22 Magnum ammo tests this month. You overlooked one very good possibility for that caliber, though. Any readers who have a problem with recoil might want to look for an old High Standard Mark IV revolver. It is an all-steel nine-shooter instead of the alloy frame of the Sentinel revolvers of yore, and recoil is barely discernible. I picked one up from the Internet not long ago and coincidentally happened onto your 45-grain ‘A’-rated Hornady load. Haven’t had it to the range yet, but I found a YouTube review that showed the Hornady 22 Mag. bullet going into ballistic gelatin and looking good.

We all also know that some people continue to carry 22 LR for self-defense, and I saw some penetration testing of several short-barrel defensive loads that indicate they might be superior to plinking ammo in that role. I’d like to see you test some of those loads, including the CCI segmented HP, on the same premise used for the magnums. Not to recommend the little 22 LR for defensive use, but to help those who do choose to carry one to make the best possible choices. One of the NAA mini-revolvers or Beretta Wildcats might be the only handguns available and need all the help they can get.
— Bill Morgan,
Branson, MO

Man, that was a good article on 22 Magnum for self-defense. You wouldn’t happen to have any test results or comments on how Federal’s 50-grain 22 Mag JHP may stack up as short-barrel defense medicine? I think it’s a fairly recent development, so it may have faster powder, plus it’s a heavier bullet. By the way, where does Kel-Tec get off advertising their PMR-30 22 Mag all over the place, but I don’t know anybody who has ever got one, and the gun stores laugh and tell me to get in the five-year line. — Larry Pentz

Uhh, I’ve got a PMR-30. So does Product Coordinator Kevin Winkle. And a friend of mine in Fort Worth has two. I’ve forwarded your email to Kevin in case he runs across another one. I’m not making any guarantees on pricing, however. Sorry, we didn’t test the Federal load yet. — tw

Since I have a Mauser HSc in 380 ACP, I enjoyed seeing your comparison test of it. But I feel that the article left some important information out and was misleading in others.

The gun originally came with two magazines — one flat bottomed and the other with a finger extension. The flat-bottomed one is much more concealable, but the finger-extension one is much easier to shoot because you don’t have to tuck your small finger under the gun.

The article implies that you must always retract the slide a bit to get it to close (and have the magazine partially lowered if its empty). This is not true when you put a loaded magazine back into it. The slide will instantly close on it. This makes for very rapid reloading.

One of the key safety features of an HSc is that the firing-pin mechanism is actually made in two parts. This allows you to keep a loaded round in the chamber with no chance of the gun going off accidentally from dropping or mishandling.

After my gun was broken in many years ago, I have not had any problems cycling any ammunition through it as long the bullets have some curvature to them. Be they hollowpoints or full metal jackets, factory or reloads, they work all the time, every time.
— Dave,
Mission Viejo, California

Thank you for your detailed email. The features you list are exactly the reason we chose the HSc to test. It is an excellent pistol. I apologize if it seemed we omitted anything; that was not our intention. In the end, our testers felt the Ruger LCP was a better conceal-carry choice for .380. Testers also felt there are numerous 9mm pistols today that have the same bulk as the Mauser, but more firepower. — Robert Sadowski

I just got my July 2013 issue with the letter from SPC Burnham asking about reviews of high-capacity tactical shotguns. One shotgun you did not mention was the SRM Arms Model SRM 1216. Have I missed a review, or have you not had a chance to look at it yet? I’m intrigued by a truly high-capacity detachable-magazine semi-auto that is not based on the AK-47 design. SRM’s website is SRMArms.com. I really would like to see a fair test of this shotgun, and you all are the best I know of for that.
— Harvey,
Bellevue, Washington

Thanks for the tip. I’ve added the SRM to John Taylor’s follow-up list. The SRM’s have detachable high-capacity magazines holding 8, 12, or 16 rounds of either 2.75- or 3-inch shotshells. The semi-auto action self feeds, following the rotation of the quad-tube revolving magazine. Overall length of the 1216 model is only 34 inches with an 18-inch barrel, but more compact 1212 and 1208 models are also available. Operation is a roller-delayed action. They come with an integrated Picatinny rail combined with a three-face handguard rail for mounting accessories. The ambidextrous receiver and controls can be set up for either right- or left-handed shooters. — tw

Your evaluation in the July 2013 on the Kimber Raptor II 45 ACP was informative and fabulous. I have never seen the Kimber because of the current market situation, but I am very interested in it and the Ruger SR1911 45s. I am very interested in obtaining a copy of your evaluation of the latter pistol. Is it possible to email me a copy of the Ruger SR1911-45 test? If there is a cost for your trouble, kindly bill me. I keep every issue of Gun Tests; they are priceless. Thank you for your hard dedication and work.

I am a former combat Marine of the Korean War, and my interest in 45s has remained high over the years. I did not know Gun Tests existed until Mr. Chris Muth of the Vero Beach Indian River Sportsman Indoor Target Range told me your magazine is the most honest, factual publication available. Chris gave me the necessary info and I became an immediate neophyte subscriber — plus an NRA member, pistol owner, and target shooter — at his indoor air-conditioned range in 2012.
— Irv Botnick,
Vero Beach, Florida Semper Fi

Hey Irv: No need to send you the review. As a subscriber, you’ve got electronic access to the entire online archive of Gun Tests material. Log on to Gun-Tests.com, open an account (it’s free with your subscription), and happy reading for the next few months. The short version on the SR1911 is that we reviewed it in the September 2011 issue, along with two other affordable 1911-style 45s introduced that year. They were (at right, top to bottom) the Ruger SR1911 No. 6700 45 ACP, $799; the $799 Desert Eagle 1911G from Magnum Research, and Springfield Armory’s $939 Range Officer. Of the Ruger, team leader Roger Eckstine wrote, “If there were any complaints, such as the size of the grip panels, the lack of grip at the front strap, or the softness of the trigger, these matters can be easily addressed. In the meantime, the starting point was a handsome pistol with structural integrity and vault-like lockup. These are the two most valuable features in any pistol and the most difficult characteristics to produce.” All three guns in the test earned A- grades. The more expensive Range Officer was our top performer overall. Its superior sights made the most difference, in our view, and maybe the application of this same system would have improved the scores of the other pistols, too. Adding a sight upgrade to the two $800 pistols would make their cost about even with the R.O., so we think the difference in price between our test guns was negligible.— tw