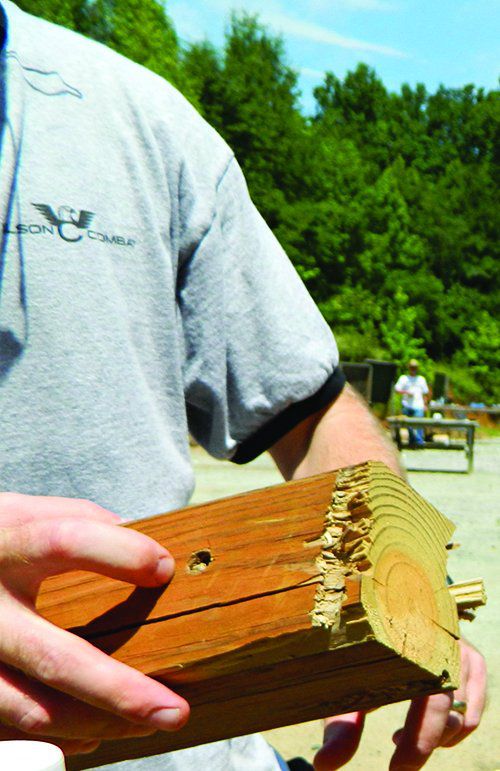 Dear Mr. Woodard: I finally sat down to write, prompted by reader 2FINN’s thoughts on our post-Initiative 1629 world here in Washington State. The background check (BC) now has to be performed by the local sheriff’s office. Previously it was truly instant: The FFL called NICS, got a proceed, and done. There is no time requirement for the sheriff’s office to do it, nor is there extra money for them to do it either. In my county, it took a week. Both the FFL and our good sheriff’s office are working hard to still deliver these background checks in a timely manner. So, yeah, that’s a bad thing. Oh, by the way, my 10/22 is now an assault rifle, but nobody is talking about that yet.

On the Universal Background Check front, I have asked several gun-store employees how much business they do on private-transfer BCs. The response was mixed. Some chortled, some giggled, and some just shook their heads and walked away. So, the answer was zero. None. Nobody comes in to get a BC done to pass a gun on to a son, to loan it to a friend for a hunt, or to buy it from a private party. Like the poor New Zealand “buyback” compliance, sensible people do the right thing when the law is stupid.

On other subjects from the last few issues:

A while back you wrote about “bling” on some shotguns. Really? Those were some of the most restrained versions of bling on a gun yet. Guns are available in all the colors of nature, plus some others. Almost any patriotic image can be had on the slide of your 1911. Full-scale battle scenes are laser engraved across the stocks and barrels of WWII military-replica rifles and handguns. I am not condemning them, but they aren’t for me. I’m past 65 now and am starting to have the “long view” of things. For a long time I have held out for wood and blue steel revolvers and bolt actions. However, just like the evolving English language that has bugged me for years, I have realized that just as even English can have new words, guns can take new shapes (and colors). And still be interesting and useful. But no more autoloaders for me, please. I like to hang on to my brass, you know?

On left-hand holsters: I am right handed, but I like holsters and your articles, so I read it. The Uncle Mike’s Sidekick line that you mention is one I find very useful. Only a few of my handguns need an expensive leather holster, but all of my guns need a belt holster for range use. The Sidekick can fit almost any gun for around $12. Nylon holsters have come a long way, too.

Electronic powder measures: When a company decides to expand into an area that they have no prior experience in, one may expect problems. Several years ago I purchased Hornady’s version of the genre. I developed a love-hate relationship with it. I relied on it, it was fast and easy with some powders, but the quirks in the programming were maddening. One day last month it just died. I bought two other examples of Hornady electronic tech. The first was also love-hate, a strip of LEDs to be mounted inside the reloading press. When it worked, I loved it; when it didn’t I hated it. The third item is the company’s Case Trim Duo. So far I just love it — no, I hate it — so I hope it has a longer life than the first two.

Glad to see you again ably filling the editor slot for the Cartridges of the World 16th Edition.

I hope the folks affected by that terrible chemical-plant fire near you are recovering from that disaster. Finally, recent events have thrust Rep. Al Green into notoriety, and I became aware of him. They say he represents Houston? Anyway, what a character you have to put up with down there. — Bruce

Thank you, Bruce. It was inevitable that the 10/22 would get some negative state attention somewhere. Rep. Al Green is something we have to tolerate around here. — Todd Woodard

Just read the December 2019 letter from Kevin about his experience with Smith & Wesson! I talked to the S&W customer service department and just got the opposite direction about dry firing their revolvers. Per their reply, “You can dry fire any of our revolvers with no harm.” Somebody at S&W must not know what they are talking about, but which one! I enjoy your testing articles. — Bill

Re “Handgun Bullets: How Do They Penetrate in Home Materials?” November 2015

Given that legally we don’t want to kill anyone, just stop the threat, this is an excellent article for those who want to know what their home-defense weapon/ammo of choice will do when they miss while shooting at an intruder. Priceless. Thank you. To those who want to split hairs, go do your own testing. Anyone expecting/demanding absolutely, positively precise, 100% flawless data, it won’t happen. This article is meant to give you a general idea of the consequences. Your findings on shotshells are most interesting. I’ve always felt #4 buckshot was a good compromise. Maybe it’s time to consider #6 birdshot for distances under 21 feet.

First, your comments on the Taurus G2c were spot on. I bought one as a backup to my Tangfolio BTA-90. Now there’s a really fine 9mm. I’ve had one for more than 20 years. Your favorable review and the adjustable sights convinced me to give it a try. I’m a bullseye target shooter, so pistols without adjustable sights drive me nuts. Since, I have sold several to highly satisfied customers. Kudos to you and your staff on that call.

Second, I was astounded that you gave the S&W Bodyguard M&P 380 such high marks. I’ve made good money swapping the sights out on that pistol for customers who think they are hard to see, and the laser too dim in bright sunlight to be any use. Second, the trigger is gritty because of very poor craftsmanship. I had a customer bring me one saying the trigger was bad. Here’s what I found. The trigger bar is a stamped piece of metal. The durable information regarding the pistol is stamped on the side of steel insert in the polymer frame. The raw edges of the transfer bar rub across the raised lettering on the frame insert. This is the source of the trigger’s gritty feeling. Not wanting to touch the stamped information and serial number, I polished the transfer bar, resulting in a much better, if still ridiculously long, trigger pull. I would suggest the lack of attention to detail on the transfer bar would disqualify the M&P380 from being a top pick. — Ken

I enjoyed your article on use of 22-250 rifles for smaller big game. Using appropriate projectiles like Barnes 62-grain TSX in .224 caliber, a 223 Remington can also yield wonderful closer range performance. In the right rifle, it’s highly accurate. Recoil is so minimal that you can keep the game in view when the projectile strikes. If the game is close enough, a head shot is deadly. It’s not a 30-06, and neither is its recoil! It is another option to be considered under the appropriate circumstances.— Alan W.

Hello, staff. Prior to the 2019 hunting season, I had decided that this would be the year for me to take the plunge into the world of handgun hunting. My choice in the right handgun hunting platform had a few requirements that were simple and straightforward: I wanted something that offered versatility (i.e., being able to fire more than one cartridge); I wanted a round that could tackle medium-sized game (whitetail deer) up through the larger species of big game, moose and elk, and potentially one day safari-type dangerous game; and I wanted a frame that was accurate, yet comfortable to shoot.

After hours of research and scrubbing through online videos of hunters using various types and calibers of handguns in differing hunting scenarios, I opted for the S&W X-Frame revolver chambered in 460 S&W Magnum sporting the 8.38-inch barrel. The December 2019 review of the 460 S&W Magnum versus the 44 Magnum and the 500 S&W Magnum was added assurance. That was a well-written review, and it falls in line with some of the things I’ve also noted since acquiring the 460 S&W Magnum.

Recoil is surprisingly manageable. I was initially a little concerned about recoil, but S&W did a very good job engineering this massive X-Frame. From the weight distribution, to the ported muzzle, to the gain-twist rifling, it is a strongly engineered handgun that offers very manageable shootability. They are accurate. They are powerful. But most important, they are versatile.

Not only does the 460 S&W model fire the 45 Schofield, 45 Long Colt, 454 Casull, and the grand-daddy of the line-up in the powerful 460 S&W Magnum round, it adds a lot more versatility to reloaders. For example, with the different types of propellant that supports the 460 S&W, a reloader can use the 460 S&W Magnum case with lower charges to achieve softer-recoil shooting rounds. As always, do your research before venturing off into reduced loads if you are reloading 460 S&W for the first time. There are a lot of good articles out there, and several of the more common reloading manuals (or online resources like Hornady) provide excellent load data. In short, reloading the 460 S&W is yet another great part of the versatility of this round.

I’m looking forward to harvesting my first animal with the 460 S&W Magnum. Keep up the great work in future issues to come. — Ryan