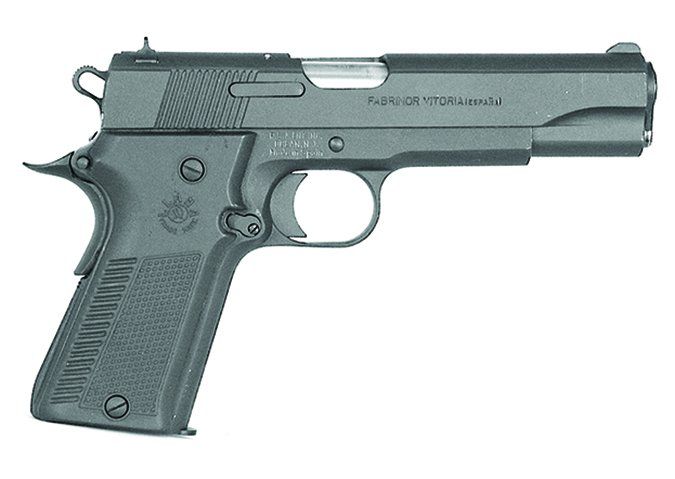 Re: “More 45 ACP Semi-Autos: Stay Away From Llama and Firestorm,” September 2001

I recently read your article on the Llama. Truth is, I’m having issues with mine. I’ve replaced parts and carefully polished the barrel, cleaned and lubricated it, but it still jams while feeding the seventh round. It jams between the extractor and the magazine, the feed ramp and the chamber. I have to drop the magazine to release the jam. The first six feed, fire, and eject just fine. Any suggestions? I thought a factory magazine would solve this issue, but I have been unable to find one. Any help you can provide would be greatly appreciated.— Alicia

There are a lot of variables in 1911 function problems, as you’ve noted. Magazines can be a big one, so try as many different makes as you can lay your hands on, ideally by getting loaners from friends to test before you buy. But the issue is, can you find any ammunition that will function? Generally speaking, ball ammunition will feed more consistently than hollowpoints, so that’s a pretty cheap way to test as well. You can load only two rounds at a time, since it’s the last round that’s giving you trouble. Some polymer-tip 45 ammo may help as well. If you exhaust those avenues, then you may have to seek professional help for the gun. — Todd Woodard

I’m a long-time subscriber. Great publication you have. Unique and valuable! But, oops! It appears to me somebody got their photos mixed up. In the May 2016 issue, page 7, in the sidebar where the Beretta specifications are listed, there is a photo at the top with a complete view of the gun, but the third photo down shows a detail of the buttstock that looks like the Benelli instead. Everybody makes mistakes.— John

You’re correct. The Benelli buttstock incorrectly appeared in the module for the Beretta Model 1301 Tactical 12 gauge Semi-Auto J131T18. Above is the correct image for the Benelli Model M4 Tactical No. 11707 12 Gauge buttstock and the caption that should have gone with it. — tw

Maybe, just maybe, doctors should focus on the fact that more innocent people young and old die at the hands of doctors each year than by children getting into unsecured guns at home. It is simply not their responsibility to counsel our young on this subject as in many cases they don’t have a clue about firearms in general. I applaud you Todd Woodard, please keep up the good work! — PT

As an avid shooter and a physician, I am really bothered by the idea that physicians need to ask about the presence of firearms and the safety measures in place in the home. Don’t get me wrong, this is an important issue, but it shouldn’t have to be handled during the annual physical. First, most docs will admit that they are totally naive about firearms and firearms safety. Second, patients have no obligation to be honest. Third, if a patient reveals firearm(s) in the home and that information winds up in the electronic health record, it’s there for good. Who has access to this information and for what purposes will it be used? Last, remember the Freakonomics piece about the biggest threat to your children on a play date? Yes, the swimming pool is 100 times more dangerous than the handgun. The swimming pool is infinitely more dangerous than the properly secured firearm. Should I also ask patients about the absence or presence of a swimming pool and how it is secured? Where does this conversation stop? — Posted by: FirearmDoc

Just read the latest issue of Gun Tests and saw mention of problems with the Taurus Millennium Pro 45 ACP Compact pistol. I own one of these pistols and apparently did not hear about the problem. Please advise what to do with my gun in regard to returning for repair or whatever you can provide. Your magazine is top-rate and one of my favorites. — Boots

Hey Boots: Thanks for writing. In the matter of Carter v. Forjas Taurus, S.A., the court has continued the hearing on final approval of the settlement until July 18, 2016. The claims period will not begin until after that time has passed. Additional details will be posted to a website, TaurusCarterSettlement.com, including various settlement offers, which include receiving a payment of up to $200, repairing existing guns, or replacing them as necessary.

In “Firing Line” last month, muzzle energy for .410 rounds was discussed for use in various Derringers. I don’t own a Derringer or a chronograph, but standard Winchester Super X shotshells are not in the same class as .410 handgun ammo. I have tested both types since buying a Taurus Judge eight years ago. There are probably almost a dozen varieties with various combos of slugs, buck shot, BB’s, etc. Just sticking to ones loaded with buckshot (Remington), they are plated, have more penetration, and shoot a tighter pattern. A Brenneke .410 handgun slug surprised me by penetrating 6 inches of wet phone book at 10 feet. I am sure they still would not match the muzzle energy of 357 Magnum or 38 Special, but .410 handgun ammo is more powerful than regular .410 shotshells. — Dave

As a longtime subscriber, I value the knowledge and fairness displayed in Gun Tests Magazine. I am hoping for some testing of the LAR-47 in the near future, to see how it measures up to the competition on the market. I started with the low-cost SKS rifles many years ago, and as my eyes started to fade, I hung good optics on most of my rifles, but the upper cover on the SKS would not allow reliable optics mounted on top of the receiver. The same thing is maybe true for the AK-47 as well. ARs in 7.62x39mm did not provide enough reliability. So I went several years looking for a 7.62×39 rifle to go with my supply of ammo on hand. I think the solution for me was the Rock River LAR-47 with a 3×9 Redfield scope mounted on a 1-inch riser. With hollowpoint factory ammo, I have been impressed with its accuracy at 100 yards. My 18-year-old grandson harvested a doe, a bobcat, and a 225-pound hog with this rifle this past hunting season. He fell in love with the gun. Have I stretched the limits of this 16-inch barrel, letting the grandson shoot it as a deer rifle? Do you think it will shoot reliably past 100 yards? I also have plans to hang an EOTech on a second LAR-47 for shorter-range shooting. Thanks again for a great magazine. — Don

Hey Don: I appreciate the praise and compliments on behalf of the writers. The staff works hard to find interesting guns to test, and because we don’t accept advertising, we don’t have commercial pressure to tout one gun over another. In 2012, Rock River introduced the LAR-47 lower receiver, which had been engineered to accept 7.6239-type AK magazines with the ergonomic advantages of the AR platform. I don’t currently have an article in development on the Rock River LAR-47, but that can change PDQ, so we will banter that around. As far as the 7.62x39mm round itself goes, it’s basically as effective as the 30-30 Winchester, which is sometimes chambered in 16-inch lever-action barrels. Generally, the thutty-thutty is considered a 200-yard gun, but that’s dependent on the sights and the shooter, of course. — tw

Re: The Virginia CCP Reciprocity Situation

I recently sent you an e-mail concerning the Virginia CCP Reciprocity situation. My wife Laura and I are planning a trip to Fredericksburg beginning early next month, to visit our son and daughter-in-law and our two grandchildren.

However, we are of course very concerned about going into a state that has removed our right to self-protection provided to us via the Concealed Carry Permit (CCP) process, which was initiated in 1987 by Marion Hammer and the Unified Sportsmen of Florida organization here in Florida. I received one of the first fifty licenses issued back then. And Laura has had her CCP for about five years.

What’s the status of reciprocity between Virginia and other states as of now? — John