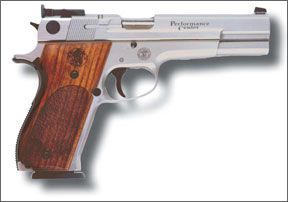 I love getting GT each month, and the articles have helped me with a couple of purchases. However, I did want to call your attention to an error in your remarks about the 6.5 Grendel. You mention that “Grendel is a monster that terrorizes Danes in the novel Beowulf.” Novels, as a genre, didn’t really come along until the 18th Century, hundreds of years after Beowulf was recorded in the Nowell Codex. So Beowulf isn’t a novel, it’s an Anglo-Saxon epic or heroic poem.

There will be a quiz later. Keep up the great work!

I appreciate the correction. Also forwarded your note to my son, who’s taking both philosophy and English this semester. He might as well benefit from the mistakes of his father. —Todd Woodard

Tony Ford asks for some 6.5 Grendel tests. Perhaps my input will help you proceed: As Mr. Ford says, Sabre Defence, Alexander Arms, and Les Baer all make 6.5 Grendels on the AR-15 platform. I’m not familiar with the Sabre Defence weapon, but Alexander Arms makes a weapon designed for the 6.5 Grendel cartridge, whereas Les Baer has tweaked the chambering for his 6.5 LBC-AR cartridge for more accuracy. Also, Competition Shooting Sports has tweaked it in a slightly different direction and has Lothar Walther produce a barrel for them in what they call 6.5 CSS. Both the CSS and the LBC-AR barrels still shoot the stock 6.5 Grendel. Also, one can purchase an upper from Model “1” Sales of Whitewright, Texas, in what they call 6.5 Sporter with an E.R. Shaw barrel that shoots the 6.5 Grendel.

According to Tom at CSS, the difference between the CSS and LBC barrels is that there is a .0002 difference in the neck dimension, and the 6.5 or 264 LBC has a single-angle throat, whereas the CSS has a shorter freebore and a double-angle throat to shoot all of the factory ammo.

Although one may purchase 120-gr. ballistic tip Nosler ammo from Alexander Arms as well as a 120-gr. TSX round, the 123-gr. Lapua is supposed to be the best cartridge in the 6.5 Grendel line. Les Baer has Black Hills Ammo especially produced, with the heaviest bullet a 90-gr. sample.

One may also purchase a Tubbs rifle in bolt action if one has the cash. This is where I come in, as I’ve always been a fan of the 6.5 bullet due to its top-of-the-charts ballistic coefficient. I own a 6.5x55mm Swede M96, but its 30-inch barrel is a little long for whitetail hunting, and I’ve always thought that a 6.5 based on the Russian short, or 7.62x39mm round, would be an ideal hunting cartridge. Although the Grendel round was reached by starting with the 6PPC round and working up, the finished product, case wise, is almost identical to the Russian round.

I’m presently in the process of building a bolt action that will include a 16FCSS Savage short action with Accu-trigger and Accu-stock, a Lothar Walther barrel in 6.5 LBC in Savage Varmint Contour, 20 inches in length shortened to 18 inches with a muzzle brake installed. If you are interested, I’ll let you know how it comes out, and, more important, how it performs. Total cost will be around $1500. If I had used carbon steel, it would have been around $1200. Note: According to the 6.5 Grendel website, one can expect very good accuracy with this round out to 700 yards, and although Les Baer hasn’t worked with that long a distance, he’s touting 1/2 MOA with the 6.5 LBC or the 264 LBC, as Shotgun News is now advertising it.

I also enjoyed the “Downrange” article about the Tenth Amendment and the Firearms Freedom Act. I’ll have to see if my adoptive state of Alabama will pass something similar. —Jim Howe Jr.

Re “Smith Lover’s Quandary: Is One Of These

I thoroughly enjoyed your Smith Lover’s Quandary article. However, I disagree with the A rating you gave the S&W Model 952-2 (shown below) as a gun for NRA Centerfire competition because, compared to other bullseye pistols: Its trigger pull is too heavy; it costs too much; and its accuracy is lackluster.

To illustrate my point, consider four other bullseye pistols:

Each of these pistols is suited for NRA Centerfire competition. In addition, the three 45s can be used in the Any 45 Caliber Pistol stage as well. Each has a lighter trigger pull than the M952-2, and the most expensive is $512 cheaper.

If you extrapolate Gun Tests’s average 15-yard groups to 50 yards, you get groups of 5.3 in., 4.7 in., and 3.7 in. The maximum diameter of a 9mm plug is 0.359 in. Assuming the Gun Tests measurements were center to center, the groups would measure 4.97, 4.31, and 3.31 in. inside edge to inside edge. The diameter of the 10-ring of a 50-yard slowfire target is 3.36 in., hence the Winchester ammo is just barely capable of shooting possibles at 50 yards in this pistol, while the other two brands don’t even come close.

A couple of comments on your test procedures. Tests at 15 yards from a two-handed rest may be OK for defensive pistols and plinkers, but for useful results, target pistols should be test-fired from a machine rest at 50 yards. It would also have been helpful if you had tested with 124-gr. bullets as well as 115- and 147-gr. bullets.

Our rating of the 952 was a comparison to the other two in the test, not to any handguns outside our test. Your comments notwithstanding, the 952 clearly has great appeal, especially to those with a history of use of the 52. One of our staff here bought the unit for himself because he has two 52s and likes the idea of a 9mm version. The street price was competitive with the street prices of the guns you mentioned. Further, as clearly noted in the article, we did not have time to fully explore the accuracy potential of the 952. We’re fairly sure it will shoot a lot better than we had proven in our very limited time, and those 45s you mentioned would surely not do their best with, say, Cor-Bon or Federal Hydra-Shok. The Winchester BEB ammo is not our idea of ideal target fodder. It’s much too hot. As noted, we’d reload to find the best ammo. Of course, you hit upon the bullet-diameter advantage of the 45 and the potential use of one gun for two-thirds of an NRA 2700 match, which is precisely why so many NRA shooters, myself included, eventually sold their Model 52s. —Ray Ordorica

Gun Tests reader Charles Sears has found a serious safety problem with the S&W 15-22 if it can fire without the bolt being fully closed. But unless the 22 case is well supported, the firing pin cannot hit the rim effectively enough to set off the round. So I must question the cause, when, after a rapid-fire session got the rifle very hot, rounds were going off without being fully chambered.

What probably happened is the rounds were “cooking off.” Heat alone will fire a round once the chamber is really hot. This is why full automatics usually fire from an open bolt. Air can cool the barrel and chamber, and the round will not be heated until it is supposed to fire. Lucky no bullets stuck in the barrel!

I’m trying to find info on a 45-cal. FN Herstal. My local gun store has one for $350, and I think it is a steal, but I wanted to find out from an expert. Any info will be greatly appreciated. —John Thompson

My team reviewed one of the FN 45s in the April 2009 issue. The gun was the FNH USA FNP45 USG No. 47938 45 ACP, $780, which earned an A- grade. We found the thumb safeties and the single-action trigger to be so efficient that we would prefer to carry this gun cocked and locked. The USG soaked up the recoil of our heaviest loaded ammunition better than the other pistols. Its 15+1 round capacity rivaled the highest capacity 9mm pistols. —Roger Eckstine

I always enjoy Gun Tests and am pleased that you will be reviewing ammunition from time to time. Perhaps you can help with the following: From time to time I will fish in remote areas, and now that concealed handguns are allowed in National Parks, I will be carrying there as well as places where it was legal before. My weapon of choice is a 357 magnum S&W Model 60, which is the most powerful handgun I own that is reasonable to carry, and I use it with regularly available FMJ ammunition, such as Remington’s 115-gr. or Fiocchi 158-gr. FMJs. I have always considered the 357 cartridge to be marginal for defense against wildlife—mildly amusing to a charging bison in Yellowstone, but possibly effective against wolves or a lone mountain lion. For bears, the 357 would at least give me the satisfaction of having given it a headache before it ate me. In other words, better than throwing rocks and running.

But in its recent catalog, Midway lists “hunting pistol ammunition” from Cor-Bon, which is either 180-gr. bonded core SP or 200-gr. hunting hard cast lead FN, neither of which are familiar to me. There is also something called “Enhanced Penetration Pistol Ammunition” from Extreme Shock, 115-gr. frangible, which is advertised as easily penetrating thick skin and heavy bone. Do you have any information about these rounds or any suggestions about a preferred round for defense against larger wildlife—bullet weight, type, etc., and whether these rounds provide any advantage for this application? —Jim Heimer

Jim, sorry, but our ammo testing protocol is currently set up for defensive use, with controlled penetration as one of our test goals. Ray Ordorica said, “The 357 Mag. is never a bear cartridge, not for big bears like you might find in Yellowstone. I suggest you not waste your time and energy. What you want (for Michigan blackies) is 173-grain hard-cast Keith bullets with maximum charges of powder, if you must use your M60. What you really need is a bigger gun.” —tw

I have been a Gun Tests subscriber for about four years, and I have a question. In the 45 ACP ammunition test, Bob Campbell made some general comments about the potential applications of that round. I think that you should consider a future article comparing the various types of ammunition ballistics and the best usage of each for your readers. Maybe consider writing one article about the various calibers of pistol ammunition and then do one on rifles at a later time. For many of your readers it might prove to be valuable insight as to the general advantage or disadvantage of each caliber.

Questions such as: Is this round of 9mm adequate for basic home defense or does it not have the stopping power I want? I think giving the reader insight into what caliber of gun best meets a certain purpose would help a potential purchaser narrow their search more quickly. -Seattle, Washington

It might be easier for us to debate religion. First, let me pay compliments to the testers and writers who assemble the information that eventually becomes the magazine. The insights the testers provide are thorough and well reasoned, even if the customers may disagree with a conclusion here or a protocol there. Intelligent people can disagree about these things.

Thereafter, the writers assemble the test teams’ comments and turn that data into words. Then I read behind them, and y’all read behind me. That gets us all pretty close to right in most cases.

In most articles, we do try to expose our biases about round suitability (or lack thereof) for the task. A more general piece about choosing the right round for the job has value, I agree, but I’m not sure we could come to a consensus. But I will think about it. —tw