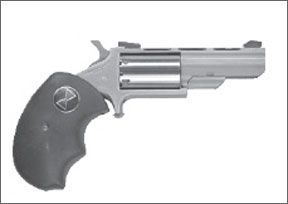 They tend to be carried, and they offer a big advantage in the defense department with the CCI ratshot shells. These are not kill-or-be-killed firearms. They are “stay away from me and/or leave

me alone or you are in for a bunch of hurt” guns.

I learned this and bought my Black Widow when an old man told me about a 300-pound bully that had him against the wall with his feet off the ground over a reserved space at the flea market. The old guy said he had his NAA mini-revolver in his hand and poked the bully in the stomach and cocked the gun.

No one likes to be shot. And no one was. I load my gun with three of the little shot missiles and then two CCI hollowpoints, all in .22 mag.

The missed advantage to the longer barrel Mini-Master is that if you keep it in the half notch between the cylinders and carry it in your pocket, the longer barrel seems to keep the butt up where you can get hold of it. There are also some great polymer holsters for these little guns.

While working in my barn, I often carry the Black Widow pistol in my pocket to shoot rats and poisonous snakes.

NAA has a new boot-type pistol with a normal/Western style grip. I will add one to my collection as soon as possible.

With regard to the article on the Taurus 941, I have never seen the reason to put a .22 Magnum in a handgun. The second handgun I ever bought was a Ruger .22/.22 Mag convertible, and it was impressive for the muzzle blast, but then I started to learn about ballistics. The cartridge is only worthwhile in a rifle, and then is limited.

I have considerable experience with Taurus and bought one of the first Model 85SS handguns a couple of decades back. The firing pin was way too short to be reliable. They sent me a new pin, and everything was fine. I have one of the Model 94s in .22 LR, and it is a handy trail gun with none of the trigger problems of the 941.

It is like the Smith Kit gun, but three more rounds.

Your article makes me want to get the 94 back out to play with. Taurus makes quality handguns at reasonable prices, but it is their warranty that really makes them worthwhile. Many of their guns require a bit of warranty work, but then you have a fine firearm. I always tell my customers that, so they are prepared. A well-informed customer is a happy customer, and it brings repeat business.

After reading the article on “Pocketable .22 Mags,” I wondered if you had considered the Rough Rider models made by Heritage Manufacturing of Opa Locka, FL (http://www.heritagemfg.com/)These single-action revolvers are delivered with both .22 Mag and .22 LR cylinders, and many of the models are priced under $200 retail!

They come in a variety of finishes, two grip styles, four barrel lengths, and some have adjustable sights. And a surprising feature (for a revolver), they have a hammer block safety.

I recently purchased one in the silver satin finish with 4-inch barrel, fixed sights, and the birds-head grip. So far, I have fired 50 rounds of .22 Mag and over 200 rounds of .22 LR through the gun with no failures of any kind. It is very enjoyable to shoot, although it would be better if the rear sight notch were deeper and slightly wider.

Despite the rear sight, it was no problem to keep all my shots on a 6-inch plate at 10 yards firing offhand with one hand. I would suggest getting an adjustable-sight model for best accuracy.

As you might expect on a revolver priced under $200, the “fit and finish” are not perfect. There are visible casting marks on the grip frame and the finish (some kind of powder coating?) has a few flaws in it. However, there are no sharp edges or any defects that would impede functionality. The green-camo laminate grip panels (standard on many models) may not be aesthetically appealing to some, but there are other materials available.

Like the Taurus 941 you reviewed, the Rough Rider would be difficult to call “pocketable” given its size and weight. But the

versatility of having the two cylinders, the classic Colt SAA styling and the low cost might make it worth consideration. Thanks for a great magazine!

We tested a Heritage Rough Rider in .22 LR/Magnum in January 2001 and called it a “Best Buy.” That seems to mirror your experience. – Todd Woodard

Cmon, guys. The pic showing the XD mag loader at the bottom of page 6 is a put-on, isnt it? Looks to me the only thing thatll get loaded is a finger.

I pull down the thumb-handle with my left thumb on the bullet-count-hole-side and feed from the front.

Ive had my XD45 Compact (should be called a convertible, methinks) for exactly one month now after saving up and trading in a well-used S&W Sigma SW40F that had a harder trigger and more (apparent) recoil. My local gun dealer had no problem ordering this one for me in June.

My only complaint with my XD is the 13-round magazine. No matter what ammo I use, it fails to feed with eight rounds left in the magazine. And I mean it is consistent and frustrating. Must contact the good folks at Springfield.

Your July 2007 article on .45 caliber polymer pistols came at exactly the right time. Ive always been partial to the 1911 Government Model, but its hard to carry concealed. Also, the magazine capacity of John Brownings best is a drawback, at least compared with hi-cap .40 caliber pistols. Your report on the

Springfield Armory XD45s was enough to send me to my neighborhood gun store, where I found and bought the compact (4-inch barrel) model. I stopped by my range on the way home and fired a hundred rounds through it, and I totally agree with your review. The trigger pull is great, and it is a natural shooter. Ill find out how well it works at the next combat pistol course next month, but it feels great at the range. I own several Glocks, but the XD is my new favorite firearm.

On May 16, 2007, I ordered a Springfield 1911-A1, in stainless, Model P19132LP from my local dealer. My dealer checked with all his suppliers with negative results. My dealer said I may have to wait three months for the gun. I wanted the gun, so I agreed.

I have had two friendly e-mail exchanges with Springfields customer service department. In the last e-mail, I was told some of my particular model were manufactured; however, I havent been contacted by my dealer even though their suppliers have “flagged” that particular model as one for my dealer.

In a telephone conversation last week with my dealer, I was told these extended waits for guns from Springfield were “pretty common.” So, Ill wait for another couple of months and see what happens.

In your July issue, you said it would be interesting if other readers were having a hard time getting their Springfield XDs. As of June 20, my dealer said the gun I wanted, the XD 9mm Tactical, is not available from most suppliers.

Reference the letter from Daniel J. Langer regarding carbine-pistol combinations and Ray Ordoricas response: I have another combination to suggest: The Kel-Tec Subrifle 2000 and a Glock pistol using the same magazines. My set is Glock 17-based and is a great combo, and the whole thing fits in a relatively small briefcase. This caliber was chosen because 9mm ammo is cheaper for more practice and shooting fun at less expense. For more punch, especially if these weapons were to be someones primary defense battery, .40 S&W might be a better caliber choice.

Re “Used Shotguns: Which Pumps

In the July 2007 issue of your excellent publication, there was an error in terminology. The article on used shotguns referred to “Winchester Super Speed Game Loads of 3.25 drams of powder….” Slightly further in the article is a reference to “Federal Hi-Power 3.75 dram shells….” The correct reference should have been “dram equivalent.” Measuring powder in drams was a black powder reference. Modern shot shells use “dram equivalent” as an indication of velocity, measured by the velocity of black powder shells using that amount of black powder. Use of smokeless powder measured in drams would not be safe.

Youre right, of course. This was my error, not Ralph Wininghams. – Todd Woodard

As a longtime subscriber, I feel compelled to comment about some of the reviews in Gun Tests. Without going to the trouble to quote chapter and verse, I have read comments from reviewers stating that a problem with a brand-new gun could be: a) easily fixed by a competent gunsmith, b) should be repaired promptly by returning it to the manufacturer.

In addition, I find the favorable review of a zinc-bodied Saturday night special in .22 caliber to be at the least, questionable. Was any thought given to the durability of this piece? Your reviews used to be concise, to the point, and often harsh, but above all, truthful and realistic. Would you accept this level of workmanship and material quality in a toaster, an auto, or a chair? If a gun does not function 100 percent out of the box, it is a defective product, period, and you guys need to have the courage and honesty to say so.

First, zinc is tougher than plastic. That was carefully pointed out in the .22 pistol story to which you refer. Please, carefully read all of what was presented.

Second, as a master gunsmith I can easily tell what things are easy to fix on various guns, and what might be problematic. If theres a big problem with a test firearm, I would not say its an easy fix. On the other hand, I could have fixed that Taurus .22 Magnum that wouldnt fire in five minutes or less, but it was not my gun, so I left it alone. I noted that the factory would fix it fast, because they have done similar things in the past. The gun simply required a different hammer, thats all. And we failed the gun, which you apparently didnt notice.

Our reviews are, if anything, harsher than ever, but it does neither the reader nor the manufacturer any good to complain about a simple, easily fixed problem that a given gun may have. -Ray Ordorica

Outclasses SigArms and Astra,” May 2007

You graded the Sig P225 as an “F” in a past issue primarily on the basis of price, if I am reading the review correctly. Would your opinion be different for a purchase price of $325?

The P225 malfunctioned with one of our test rounds. But even if it ran perfectly, it is well behind what is currently available for self defense or target shooting. If its selling for as little as $325, it is not worth much now and its chance of appreciation is limited as well. So in my view, there was no reason to recommend it.