Police Training Lacking
I have just read your August 1999 article on 9mm polymer handguns. Let me state here that I am not a fan of 9mm, but that is not why I’m writing.

In the article the author talks of the reduced accuracy of police officers since they have started carrying semi autos. It really pains me to say this, but the author is correct in his assumptions about officers’ lack of training.

I believe that the semi-autos we carry (my department issues Glock 23s, and I’m well aware of your dislike for Glock) are very accurate. The factory ammo is excellent. The problem is lack of training time, high-stress scenarios, and realistic training. I also believe that the general thought is that the officer carries, on the average, 46 rounds in three magazines, and usually 16 rounds in the weapon. That’s more rounds in the weapon alone than I carried total when we carried .357s. The thought seems to be much like the “Viet Nam” syndrome when the M-16 arrived: spray & pray.

I hope this lack of training changes in the near future, but I doubt it will. Keep up the good work on an outstanding product. I look forward to each issue.

Assault Rifle Question
I have been an active shooter/competitor for nearly 40 years, and I’ve seen plenty of “honest gun tests.” Funny, but most just aren’t as honest as yours. Please keep it up! Now to my question.

In the April 1999 .308 rifle tests, you show a “new” Argentine FAL and a British L1A1 built on an Entreprise receiver. From the picture both rifles have pistol grips, 20-round magazines and flash hiders (or at least threaded barrels). So my question is simple, how do these rifles square up with the definition of an “assault rifle” according to current law? Thanks for your time, I’m sure you appreciate the importance of the question for your readers.

The gun was manufactured under old import rules. Many of the design features on those guns are no longer allowed, as you correctly note.

Corrections & Clarifications
In the June 1999 Gun Tests article on gun locks, we erred in describing the involvement of Saf T Hammer in a government-agency review of safety devices. Instead, the company we meant to identify was Saf T Lok, as reported in the Wall Street Journal April 23, 1999. In the page 1 WSJ story, Dennis Henigan of Handgun Control Inc. went in front of an anti-gun conference in Chicago and failed to operate the Saf T Lok system correctly.

In the July 1999 article on recoil guide rods, we pictured damage done to recoil guide rod buffers and identified one of them as the Wilson Shok-Buff product. Ryan Wilson of Wilson Combat wrote, “We have never made a clear Shok-Buff. They have been royal blue for 5-6 years and prior to that were black.” Instead, the caption should have stated that the clear shock buffers we pictured were taken from guns fitted with the Wilson and Sprinco guide rods, respectively. 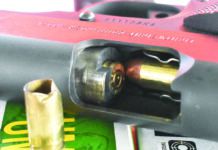 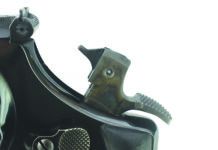 How Are Things in the Gun Biz?