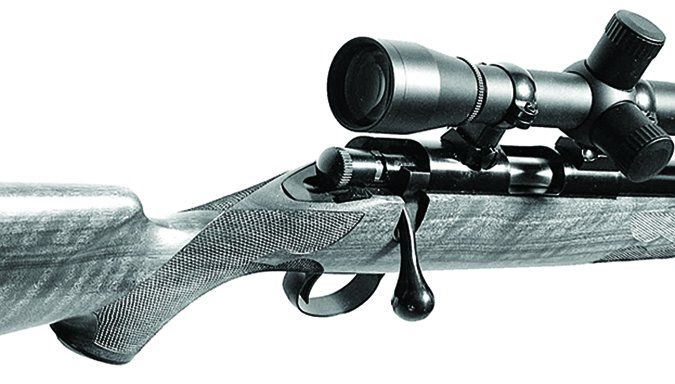 I was reviewing the Value Guide of bolt-action rifles in your July issue. By far my most accurate rifle is my Cooper chambered in .243. Have you ever tested a Cooper? They sponsor accuracy competitions each summer in Montana and Maine, and if you want to win something, you better be able to hit a bullseye the size of a pencil eraser at 150 yards. The catch is that you have to use a Cooper rifle.

We haven’t tested a lot of Coopers, mainly because of their expense. The last one was in May 2003, a Cooper Arms Custom Classic 22 LR priced at $1895. We said, “Opening the box on the Cooper was a sheer delight, and it takes quite a rifle to impress our somewhat jaded crew. Even at the end of our test sessions, everyone who picked up the rifle still had to say, ‘Man, what a lovely rifle!'”

Further: “The wood was really nice. The checkering was really nice. The ebony forend tip was really nice. The fit of the Niedner steel butt plate was really…. You get the picture. This was a looker. It reeked of quality… The balance was superb, belying the rifle’s weight of 6.7 pounds. It was slightly muzzle heavy, which we liked… Intricate high-quality checkering like this that is extremely well done is sometimes glossed over or missed entirely, but one of the people who saw this rifle was a stock maker, and he said he’d spend a long time getting checkering that good. Each diamond was perfectly pointed up, especially in the corners. There were no overruns or mistakes. The lines were straight, and the pattern was tasteful. Hand work at this level has always been expensive. The AAA Claro walnut also would have been an expensive blank. Individual inletting, which the Cooper had, is yet more expense, and when you add it all up, you’ve got a rifle costing nearly two grand, and we think every bit of that was justifiable.”

In the July issue of Gun Tests, a reader was trying to compile a list of handgun ammo so that he could compare features. Sportsman’s Guide has hundreds of ballistic charts, as published by Remington, Winchester, and Federal Ammo, as well as pricing for ammo. I hope this will help a fellow subscriber.

Jerry, thanks for passing that along. If readers want to go check this out, navigate to SportsmansGuide.com/BallisticsCharts. — tw

In your review of the Rock River Arms LAR-47 CAR A4 CL, you stated that you could not use iron sights because the gas block was .025 inch lower than the receiver. I have seen other ARs with this set up. Diamondhead Premium sights makes backup iron sights for this set up. The front sight is .025 inch taller than the rear sight, and when installed, can be used on the Rock River Arms rifle. You can order them from Stag Arms. Great magazine, keep up the good work.

John, thank you for the tip. Find the sights on the Stag Arms website. At the bottom of the order window, there’s a flagged note, “Sight Height.” One of the choices is “Gas Block Height.” The FAQ for the sights reads says that all of the rear sights are the same height. But if the front rail of your rifle is lower than the rail on the receiver, you will need the gas block height front sight to compensate for the height mismatch.” — tw

I know the State of Maryland has some restrictive laws, but do you really have to check them twice as much as all other States? Just kidding.

Sorry for repeating Maryland in the description of states with restrictive gun laws. Maryland is not twice as bad as other states. Cali may be twice as bad and widening her lead where bad gun laws are concerned. — tw

I would like to ask if the Taurus 709 Slim has ever been tested in your magazine? If not, are there any immediate plans to do so? If the review is in a back issue, can you advise me of the issue and tell me if copies are available?

We have indeed reviewed the Taurus 709B No. 1-7090319mm Luger in the March 2012 issue. Electronic copies are available on the website. Of the gun, we said, “We found the Taurus 709B to be controllable, so even the hottest EXP rounds were not tiring to shoot. Due to its small size, we actually preferred shooting the 709B held in one hand. This could be a plus, in our view, because when fighting in close quarters the support-side hand might be busy wrestling with an assailant… Our Team Said: The 709B performed quite well. We did notice discoloration on ejected brass that told us the barrel was unlocking prematurely and allowing gas to blow rearward into the chamber. But suitable velocities for each round were recorded, and the 709B was one of the least tiring or abusive little nines we’ve tried.” — tw

Two of the articles in the June 2016 issue brought a couple questions to mind: First, how would the Glock 23 score among the other 40 S&W guns you rated? For me, it’s a good-shooting compact piece that, with a few drop-in accessories, is a very versatile one. I have a 357 SIG barrel, a 9mm barrel and spring, and a 22 LR conversion kit that all function well. I was disappointed that the G23 wasn’t covered in your ratings.

Next: I have seen many Colt and S&W 38 Special snubbies (Detective, Chief, etc.) listed on auction sites and resting on gun store shelves, and I would prefer to own one or more of these classics rather than a new model, on the condition that they can be counted on for effective function. Have you done an article featuring these older 38s that I can use to help me decide on which guns I should consider?

I agree with Trump’s platform on 2nd Amendment policy. — Jim

I inadvertently deleted the Glock 23 GEN 4 40 S&W when compiling the table. It earned an A grade in the May 2013 issue. The review of the gun said, “This version of the popular gun comes with several different back-strap contours that the owner can easily swap out to better suit his or her individual mitt. Neither of the two add-on grips make the grip any smaller, however. We liked the grip as it was… The Glock is all flat black, with a minimum of controls. There’s the trigger with its tiny but effective leaf that gives the gun all the safety it needs. We noted the contour of the trigger has been improved, and we liked it. The magazine release is reversible, and worked like it was supposed to. On the range we had zero problems. The trigger was decent and clean, and we were able to shoot groups in the 2.5- to 3-inch range with ease at 15 yards. The gun shot essentially where it looked. The groups centered all three test loads within 2 inches of the aim point. The gun got the best groups with the heaviest bullets… Our Team Said: We liked this gun a lot. It handles the hotter 40-cal cartridges well, and gave exactly no problems.” A June 2006 test of the gun earned an “Our Pick” recommendation.

On the revolvers question, the archives are wide open to subscribers to pursue information on whichever wheelguns you’re interested in. Stick with A and A- guns and you shouldn’t have to worry. — tw

I have a number of 9mm handguns and 45 ACP pistols. I think the FN-FNX 45 Tactical is an outstanding handgun and is worthy of a higher rating. Granted, the 9mm pistols might be a tad more accurate for most people due to lower recoil, etc. Considering that the FNX 45 is a big-bore tactical weapon designed for more pressing uses than punching paper, the average group of 2.2 inches is sufficient.

As written, I agree that it is a soft shooter and is much more forgiving than my 45 ACP Kimbers, Range Officers, or SIG.

First, in May you folks said a story on 380 ammunition was coming soon. Is there something I could do to help speed along this article? I’m very interested. Second, as one becomes older than dirt, it is increasingly difficult to cock a semi-automatic pistol. It seems that right now, the smaller a pistol becomes, the tougher it is to load the first round. It sure would be wonderful if you published a story on a different type of pistol operating system, other than the standard Browning mechanism. Ideally, it would be a system that would simplify cocking a pistol, such as a double-roller semi-blowback approach. I’m sure somebody has figured out a way to use a cartridge’s expanding gases to retard the movement of a slide and reduce the required strength of a recoil spring.

Hey Richard: The 380 ACP ammunition story appears in this issue. Also, in the 380 pistol story in this issue, we look at Remington’s RM380, which touts needing only “one-finger” slide-racking force. It’s a simple blowback mechanism. Demand will force such advantages into firearms designs. — tw

How About Just the PDFs?

No Bullhide; Our Spirits Sagged