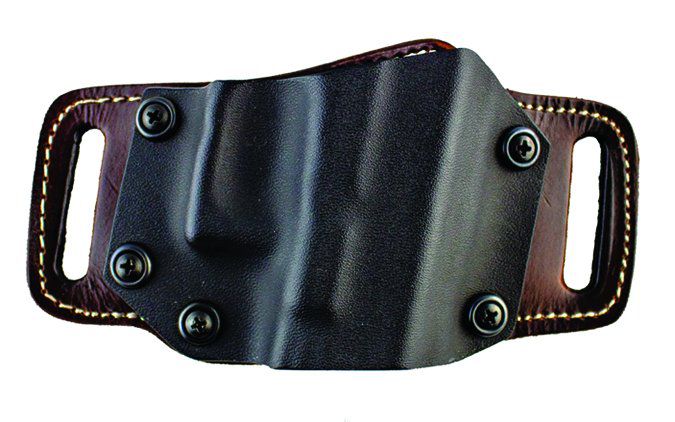 Tell reader Doug that he needs to find another holster for his S&W M&P Shield EZ380. That pistol is a relatively new model, and there are not many holster choices out there yet. I bought my EZ380 at the end of December, as an Xmas present to myself, based on the reviews you folks have done.

For my holster, I found a real nice soft leather IWB at a local gunshop, which is run by pistol guys. They took an EZ off the shelf, and we tried several holsters to see what fit. The one we picked was by 1791 Gunleather, out of Miami, Florida. The exact model is RH size #3, “Multi-Fit IWB Smooth Concealment Holster.”

Now once again, this holster is NOT actually designed for the EZ380, but it works great, and is real comfortable to wear. No issues with the holster catching on the mag release. Now, since I really only have one pair of jeans for IWB carry, I still wanted an OWB holster. For this I tried a different local gunshop, closer to home, and they let me try a few “universal” holsters off the shelf. The one they suggested fit the gun okay, but like you, when I pulled the EZ out of the holster, just with my hands, the magazine came flying out! So back on the shelf that model went.

I then went to shop around online. I have used holsters by Tagua before, so I looked around that website a bit, but ending up e-mailing them for some help. They have two models out so far for the Shield EZ380. The model I picked is the Texas Series, mini-Kydex/Leather black RH. The exact model # is TX-MINI-PART-1045. And as you can guess, this is a hybrid holster, with a leather paddle and Kydex holder. It can be adjusted for tension, but it is a little stiff to start with. I have to wear that one some more for break in. This model obviously fits the Shield EZ380, and it does not even touch the mag release. — Mike

It does indeed, Mike. Thank you. And for some other solutions, read on. — Todd Woodard

You just printed a letter from Reader Doug. He was concerned about the magazine-release button on the S&W M&P EZ380 being compressed during holster carry. Tell him to check out Clinger Holsters. They do make a holster for that pistol. Clinger makes Kydex, and they have done their homework. Their holsters are molded to cover and secure the magazine-release button. Doug experienced exactly what I have been trying to avoid. Unfortunately, most holster manufacturers leave the magazine release uncovered. I called a few of them on the phone to ask why, and they said they don’t want the holster material to make contact with the button for fear of accidental compression. Understood, but I was always thinking to myself: Why don’t you design a better holster? So far in my holster research, I have found only two Kydex holster makers that take the magazine release button into consideration and bother protecting it, Dara Holsters and Clinger. — Kent

Todd, after reading Doug’s comment in the April 2019 Firing Line, I thought you might like to know that my DeSantis 106 14 J clip IWB Tuckable holster (shown below) might be what he needs. I, too, am impressed with the EZ, and as my attached photo shows, the magazine-release button is not enclosed by the holster. Thanks for an informative and unbiased magazine that always makes my day when I see it in my mailbox. — Scott in Georgia

Dear Todd: Just read the note from Doug concerning his problems keeping magazines in the 380 ACP EZ. That got my attention because I recently purchased one of these fine handguns, in no small part because of the review in GT. Now, losing your magazine because the release button is accidentally activated by the holster could be a problem, so I got out my [empty] pistol and the holster I bought for it, a DeSantis Mini Scabbard, and strapped them on.

At this point I have only carried the pistol a couple of times, but nothing like what Doug described happened to me in those cases, nor did it happen this time either. I wiggled and squirmed, sat down and got up, pushed on the grip with my hand, forcing it into my side, even slapping it. The [empty] magazine remained firmly in place. The Mini Scabbard has an adjustment screw to tighten or loosen the grip the holster has on the gun, and I had loosened mine slightly when I first got it. The pistol slides easily into the holster, but seems to be gripped tightly enough to stay put. In looking at the area of the holster where the mag release rests, there is no leather contacting the mag release, and all the pushing, etc. simply did not bring the leather in contact with the button.

Doug did not say which holster he is using, but if he is not using one like mine, I do recommend that he give it a try.

I will mention one thing about the 380 EZ. Apparently, they shoot a little low and to the left right out of the box, according to some YouTube reviewers. I had to adjust the rear sight on mine a bit, which is very easy to accomplish.

Gun Tests Crew, Great magazine! Enjoy reading it every issue! My letter today is in regards to Reader John’s letter about spattering targets, and how he has had poor luck seeing results from 223 and similar-caliber-round hits. I have extensive experience using Birchwood Casey’s “Dirty Bird” 12-inch by 12-inch targets at 100 yards with everything from 22 Long Rifle up to 45 ACP, with phenomenal results and visibility at this range. Would strongly suggest them to all who want to be able to see their hits through their rifle scope or spotting scope at a distance. Even 22 Long Rifle hits showed up as bright-white splatters on a black background. Keep up the great work, and I can’t wait for my next issue! — Rob L. of Pennsylvania

Dear Editors & Testers, I really enjoyed your evaluations of the sub-gauge Mossberg Shockwaves and Remington TAC-14 in the March 2019 issue. As an owner of a .410 Shockwave, I was very interested in the results of the shot pattern tests. Based on one of your articles from a few years ago, I use the 2.5-inch Federal Premium .410 Handgun shotshell with four pellets of 000 buckshot. It patterns well at practical distances, and it gives my petite wife a more formidable option than her 380 ACP pistol. I’m a big fan of the .410. We use it for snakes and prowling varmints on my small farm, and my wife likes it for home protection, too. One piece of information that was missing from your article that I’m really curious about is the velocities of the loads you tested. I would love to see how 2.5-inch length .410 shell velocity varies from my 14-inch-barrel Shockwave versus my 2.75-inch-barrel Governor. Throw in a 24-inch-barrel hunting shotgun and you’ve got the beginnings of a good article. I’ve been a continuous subscriber of your great magazine since the 1990s. You are the Consumer Reports of the firearms world. Keep up the good work! — Joe in Mississippi

Joe, thank you for the suggestion about the .410-bore velocities. I might assign that one to myself. Interesting idea.— tw

I purchased a Mossberg Shockwave a couple of years ago for home defense. I took it to the range to get an idea of how to shoot it prior to needing it for protection. I realized that it needed to be handed differently than my Remington 870, but its size would make it easier to keep hidden under my bed than a full-size pumpgun. From the beginning, it was obvious that this was not a firearm you held close to your face and looked down the rib to aim. I began practicing holding the Shockwave as suggested in the March 2019 GT issue when I first shot it back in 2016. However, a couple of months ago, I decided to purchase a laser sight and sight it in at the range. This allows me to keep the Shockwave far from my face, by my waist, and still aim it with accuracy. — Bob

Re Reviews of Shotguns and 10mms

Dear Todd, enjoyed both reviews (“Perfect 10s? We Test a Trio Of Big-Bore Semi-Automatics,” and “Sub-Gauge Shockwaves Go Up Against Remington’s TAC-14,” March 2019), but in both the 12-gauge and now 20-gauge reviews, you overlooked the big advantage of the Remington. It has the MagPul forend to which you can mount the MagPul rails and then a light and a laser. Both are real game changers. With my 12 bore and the “short shells” (which work fine in an 870), I can hammer a man-sized target at 20 yards from the hip every shot.

In the 10mm review, you overlooked the best new kid on the block, the Grand. My long-slide model is as accurate as my Kimber 1911 45 ACP and kicks no more than my Star 1911 clone in 9mm. The Grand also has a two-stage single-action pull that lets off at 3 pounds. Enjoyed your comments on New York, which we left 20 years ago to move to Wyoming and Florida. — Larry

Todd, I hope there are plans to test the new Mossberg MC1SC pistol. If it proves reliable and adequately accurate, it could be a winner. On another subject, I read with interest that you used to shoot at West Point. My son, LTC Carl J. Wojtaszek, is the OIC of the West Point Skeet and Trap Team. If you are ever in the area, the team shoots practice every Friday night and matches on Sunday afternoon, I am sure they would love to have you. — Carl Wojtaszek

That is a kind offer, and I appreciate it. Please pass along our thanks to LTC Wojtaszek for his service to the country. — tw

Todd: I just finished reading the 9mm striker gun shoot-out article. In the review of the Glock 45, it was mentioned that “(God help anyone with an aftermarket trigger or 3.5-pound disconnect in a service or personal defense handgun.)” Why this statement? I understand that if you have to use your handgun for personal defense, the prosecution will try to prove mal-intent if any type of trigger job is done. That goes without saying. I ask because I have two Glock 19s, and one Glock 23 that are used for both target practice and home defense that I’ve had the 3.5-pound disconnect installed. Personally, I dislike any firearm with more than a 4- to 4.5-pound trigger because the heavier the trigger pull, the more problematic accuracy. With the 3.5-pound disconnect, my Glocks all break at about 4.5 pounds, which is not light. — Robert

Hey Robert: That was our attempt at sarcasm. We prefer Glocks along the lines of how you have set them up. — tw