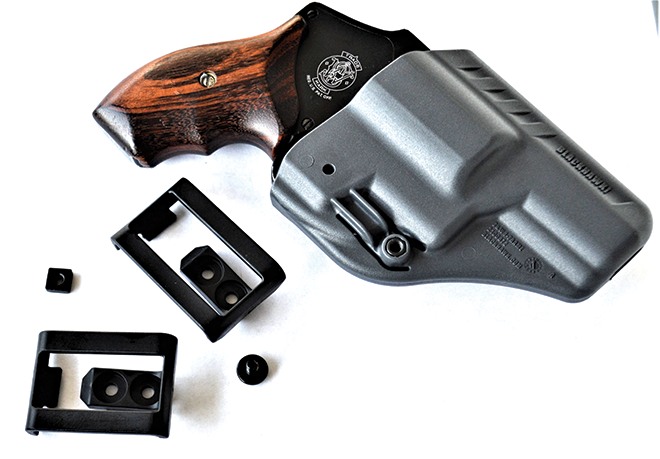 Re “A Look at Left-Hand Holsters: Picks for Southpaw Shooters,” September 2019

Just grabbed the issue out of the box, saw the ARC Holster and review. Stood there and read it. Just knew I had to have one. Got online and realized that the body side of the holster does not come up enough to cover the gun. Ergo, body-to-gun direct contact. Not good any time, but very bad in the summertime. For now, I will keep using my Concealment Express Kydex. I am sure it is almost as thin and keeps my grease and sweat off my pistol. — Murrell

Thanks for reading! Glad you enjoyed the article. Galco has several paddle holsters, and they have a left-hand option in the dropdown bar when ordering. DeSantis as well. I have not used paddles as I do not like the ease with which the holster is grabbed from the body, and also that some shift more than I like. However, both are related to my previous police experience. Oddly enough, for civilians the paddle is a much better choice. — Bob Campbell

I have been searching the archived issues to get answers about suppressors. I currently have one that I purchased for a CZ 22 LR rifle. I have two questions. Can I use this suppressor on my .223 rifle? And, can I use my current tax stamp to purchase another suppressor, or do I have to do all the paperwork and pay $200 for each new one I get? Just renewed for another two years. Keep the faith. — Father Charles

Father: Rimfire suppressors aren’t rated for the higher pressures of centerfire rounds. So don’t use it on your .223. And yes, you have to have a tax stamp for each and every device. — Todd Woodard

Re “Shooting a Pistol Is Simple… Tips for Better Marksmanship,” August 2019

Dear Mr. Woodard: I have been reading Gun Tests articles for many years, and I enjoy the objective and thorough comparisons of firearms. I particularly enjoyed the article, “Shooting a pistol is simple.” The article was well written and analytical, going through the steps to be competent with a firearm, as well as being easy to read/follow. I appreciate you bringing in firearm experts who have the ability to write interesting and useful articles. I always look forward to receiving the next month’s magazine.

As a former Marine, “outstanding” is not a word I use lightly or loosely. However, Joe Woolley’s article on pistol shooting was truly outstanding. It was, as they say, “spot on.” I have been shooting the M1911 for over 50 years now and rediscovered from the article that, even at my age, there are still ways to improve. Joe did an exceptional job of explaining the difference between procedures and techniques. When I was a helicopter flight instructor, I repeatedly told my students that, even though procedures should all be the same, techniques vary greatly, they should try them all and select the one(s) that work best for them. Only one caveat…, when flying, you DO NOT grip the cyclic hard. Thanks for the article. I look forward to more by Joe. — G.W.

My August 2019 issue contained 5 (five) pages of wasted space regarding how to (allegedly) shoot a handgun. I subscribe to Gun Tests magazine to read about gun tests (can you blame me?). If you are going to include other areas outside of testing firearms, please stick to the subject and test reloading equipment, ammunition, different sighting systems, etc. I don’t subscribe to your magazine to read blather on legal opinions (which might not apply in my jurisdiction) or how to (supposedly) shoot. In other words, stay in your lane. Please “get it” or my long time subscription might “get gone.”

Greetings, I thought your article about shooting handguns was outstanding. How you show to grip a semi-auto is how I was shown, but I see most people do not grip this way. I found my accuracy was much better using the grip you illustrated. I would really like to see a test on the Tikka T3X Lite in 308 Win. I feel it is being overlooked. I know of two that shoot half-inch groups out of the box with Federal soft-point ammo. Keep up your outstanding work. — Perry

What a great article by Joe Woolley in the August edition. His article is a complete review of everything I have experienced shooting a pistol for the last 25 years. It’s a must read for all potential pistol shooters and a complete review for long-time shooters. Great work, Mr. Woolley!

I enjoyed the Special Report on “Shooting a Pistol Is Simple.” I too believe in dry firing. I was all over the target when I first starting shooting. Then I bought a Laser Grip. Dry firing at home with the laser, aimed at photos on the wall, and sometimes at the TV, taught me trigger control. I draw, aim with the sights, then I add a little more pressure with my middle finger. That turns on the laser to see if I’m using the sights correctly. Then I pull the trigger through on my double-action revolver. At first, the laser was wiggling all over the wall. With the laser feedback, I quickly mastered it. When I got back to the range I started eating holes in the target! What a difference. I don’t depend on the laser for defense because most of the time you can’t see it in the bright Arizona sun. I practice with my sights at the range. The laser is a great learning tool and would be a great help when the light is right. — Bill

I do realize our franchise is about honestly testing firearms and accessories themselves, so we don’t venture out of our lane, as Reader Duane mentioned, very often. But as in the case of an article about legal use of firearms in self defense several years ago (Michele Byington), how to choose a legal self-defense plan (Gordon Cooper), and most recently on handgun shooting technique (Joe Woolley), the topics bear strongly on the proper use and enjoyment of firearms, so they seem germane. Also, readers responded strongly to these occasional non-product topics by reading them much more often than other content on Gun-Tests.com. — tw

What About These Rifles?

Hi, I’ve been a subscriber for the past year or two. I have a question: Have you ever evaluated either of the following two rifles: Browning X-Bolt or Tikka T3X? If so, in which issues (month & year) were the reviews? Thanks for any help.

Hey Dave: We have evaluated the X-Bolt on a couple of occasions. In the February 2017 issue, we reviewed the Browning X-Bolt Micro Midas No. 035346209 22-250 Remington, which got a B+. “Our Team Said: We can’t believe we’re complaining about a 1.1-MOA rifle, especially when it covered all the bases our test team had openly expressed. The Micro Midas is a bolt-action rifle that fits into a small space, was fast into action, cycled quickly even when top loaded, and didn’t beat us up. Given the overall package and the visual appeal, we think it’s worth the time to test more factory ammunition or develop a handload to break the 1-MOA barrier in this rifle.”

Further back in the March 2009 issue, we tested a Browning X-Bolt Medallion No. 035200224 270 Win. We said, “The Browning X-Bolt’s performance was astonishingly good. It shot all three of our test ammunitions superbly, displaying tighter-than-MOA performance with everything we fed it, despite less-than-ideal range conditions. The Browning averaged about 0.6-inch groups center-to-center with the Stars & Stripes loads, 0.8-inch clusters with the Hornadys, and 0.9-inch groups with the Cor-Bons—one of the most accurate production 270 Winchester hunting rifles we have tested.” It earned an A grade.

We’ve tested a Tikka T3 Lite in 300 WSM in the March 2008 issue, but not the T3X. It earned an A+, and “Bottom line, we liked this rifle a lot. Everything about the rifle was pretty good, we thought. The light weight, the ease of mounting our Nitrex 3-9X scope in the rings provided, the fine trigger pull, the slick magazine, smooth bolt and smooth feeding, perfect function in all respects, the great price, and not the least, the fine performance of the .300 WSM in this rifle made us think that if we wanted a .300 magnum, this would be it.” — tw

Yeah, I’m an old dog (70 years young) who has been shooting even before I learned properly from the “old” Boy Scouts in the early 1960s. But I do not understand the hoopla about these “new” 6mm and 6.5mm loadings and what benefits they offer over my tried-and-true 243 Win. with 85-grain and 100-grain Sierra boattail bullets zooming out at nearly 3000 fps and highly accurate as well. Mine has been scoped out with a pre-1980 Leupold 6.5-20 adjustable for range (parallax). Early on, I have used the 85-grain bullet on groundhogs out to 400 yards and the 100-grain bullet on deer with success. Plus, as you have spoken of, go try and find this new ammo in the countryside. I can always find the 243 at a lower price and even reload my rounds with an old Lee hand press.

Get this, my second date with my future wife was out to Lancaster County, PA in 1980 to shoot groundhogs and have lunch, which was country-fried chicken and chicken corn soup. I wanted to see if she “liked” the experience. She loved the food and loved shooting the 243, so I married her 37 years ago, and we still shoot clays together on Sundays. — Paul

Hey Paul: The very-low-drag bullets in the 6mm Creedmoor and 6.5 Creedmoor offer better performance at longer ranges. The .243 Win. case has a slightly larger capacity, but the Creeds are loaded to higher pressures, so they get slightly better velocities. For you, however, try some of the commercial .243 loads with longer bullets, such as Hornady’s ELD-X, or try some of the longer bullets in your handloads after carefully consulting a suitable loading manual. Your barrel’s twist rate will also need to be figured in. — tw