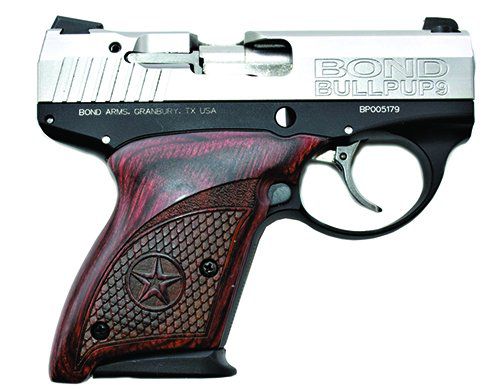 Dear Editor: As an owner and frequent carrier of one of the first Bond Arms Bullpups, I enjoyed your thorough review of this interesting firearm. I started my law-enforcement career with revolvers, and the DAO trigger pull of the Bullpup reminds me of a really great DA revolver trigger. However, your testers gave it a one-half grade demerit because the slide does not lock back after the last round. As your description of the Bullpup operating system makes clear, the loading cycle begins with the slide closed when the device (called the “tongs”) grasps the rim of the top cartridge in the magazine. As the slide moves to the rear, whether by firing or manual operation, it extracts the round “backward” from the magazine and raises it to align with the chamber as the slide moves forward into battery. If the slide locked back, two slide movements would be required: first, the slide would have to be closed to start the reloading process, then the slide would have to be racked a second time to extract a round from the magazine and load. Overall, a great review of a unique gun that packs many outstanding features into a tiny size — and it’s made in Texas!

Full Disclosure: I am a lawyer, and represent Bond Arms from time to time. I bought my Bullpup with my own money, have no financial interest in the company, and will not be paid for this letter. — John Popham

Re “10 Things Gun Owners Get Wrong About Their Self-Defense Rights,” November 2017

In the “10 Things Gun Owners Get Wrong About Their Self-Defense Rights” e-article, I must contest the author’s contention about lightened trigger pulls in point #8 concerning gun modifications, particularly the mention of a 3-pound trigger pull, which is far too light for conscientious self-defense. While it is true that a lighter trigger pull may make a gun more controllable, and thus the shooter better able to hit their intended target, no less an authority than Mas Ayoob says this is not so. Mr. Ayoob recommends a trigger no lighter than the factory standard lest a lay person be confronted with a prosecutor or lawyer portraying the shooter as someone who knows more than the manufacturer, hence putting the shooter on the defensive.

But the liabilities of a lightened trigger extend much further. Light trigger pulls have long been associated with unintended or premature discharges. The adrenaline dump is a stressful situation that not only increases one’s strength tremendously, but also significantly diminishes one’s fine muscle control. In combination, these factors argue strongly against a light trigger. Both prosecutors in criminal cases and plaintiffs’ counsel in civil cases know that there’s no such thing as a “justifiable accident.” Negligence can sustain a manslaughter charge in criminal court, and a wrongful death verdict in civil court. Thus, even in a proper self-defense shooting, the shooter can be held liable. Please bring this matter before your readers; their freedom may be at stake. — Russell

The original article appeared in the November 2017 issue and was written by former self-defense lawyer Michele Byington, pictured below. It appeared more recently as an e-blast on September 3, 2019. One of the “10 Things Gun Owners Get Wrong About Their Self-Defense Rights” was “8. Gun Modifications and Choice of Ammo May Cause More Legal Liability.” The full segment read: “A lighter trigger pull, night sights, or a tactical flashlight are all popular modifications. These modifications can make a gun more comfortable and more effective defensive tools. Loading a handgun with full-metal-jacket bullets as opposed to jacketed hollowpoints does not make someone blood thirsty. Gun owners should not lose sleep stressing about the ‘increased’ legal liability of a modified handgun or the type of ammo used. It is not outside the realm of reality to imagine a prosecutor stating, ‘Your client is a killing machine waiting to happen with that 3-pound trigger pull!’ In a self-defense scenario where an individual used a modified handgun to protect himself, as an attorney, I would not be bothered by that fact. There are several safeguards that may be utilized to attempt to keep that information from the jury during trial. The argument made to a judge prior to the jury being seated is that the modified handgun had absolutely nothing to do with why the defendant used deadly force. The focus must be on the circumstances surrounding why the defendant used deadly force — not the tool used. Whether it be a baseball bat, a knife, or a gun, the only question that must be answered is: Did the defendant act reasonably, thus justifiably, in using deadly force in self-defense? It’s the use of deadly force that is on trial; not the gun. Even if it does come out to the jury that a person used a modified handgun, there may be gun owners on the jury who have made similar modifications to their own self-defense tools. Or, an expert may testify to the efficiency and other benefits of a modified handgun. At the end of the day, choose the weapon and ammo that is best for you and your hands.”— Todd Woodard

I’m a long-time subscriber, but this is the first time I remember feeling compelled to write. I bought two brand-new Smith & Wessons in 2018, a 629 and a 642, both from the website GrabAGun. Both were delivered with heavy trigger pulls. The 642 would have the cylinder fail to turn 20% of the time, and on the 629, the trigger would stick to the rear during live fire.

I am an armorer on several systems (admittedly not S&W, but the skills transfer) and was able to get them squared away on my own. To S&W’s credit, when I called them they immediately offered to send me shipping labels and take care of the problem. My gripe is that for what I paid, I felt that I shouldn’t have to be an armorer to get the guns working when both had only four- and five-star reviews (I later found out why). Also of interest was the fact that I also dry-fired them around 300 cycles each to smooth them out and was promptly told by the tech at S&W that I should never dry fire their products. Surprised, I asked for some clarification and he doubled down and said I should never dry-fire any Smith & Wesson revolver.

On another disappointing note, I left two-star reviews on GrabAGun on those products, and the reviews were immediately taken down or never posted. I submitted them again and those also disappeared. I sent a message to GrabAGun asking why my reviews were never posted, and they did not respond. Clearly, they are only interested in top-tier reviews and will punt any dissenters.

I’m sad to see your Smith 27 was delivered with rust and a super-heavy trigger, and I’m starting to wonder about their quality control these days. I’m also sad to know that I cannot trust GrabAGun’s reviews and have to rely on other sources. — Kevin

Thank you for including a 7-shot medium frame. Perhaps this is the best overall compromise of capacity, size, and usability in the panoply of 357/38 holster wheelguns — just enough more than a standard 6 shot, but not the wheel of cheese of an 8 shot. — AR on Gun-Tests.com

Could it even be possible, in a country this size, to find a pro-gun, pro-2nd-Amendment Democrat? Could we refine that, to one who is well educated, politically savvy, and determined to become our president? What an advantage he or she would have! — Slow Walker on Gun-Tests.com

Well, the current crop of Democrat presidential candidates don’t qualify, but there are some D’s out there who aren’t reflexively anti-gun. A couple that come to mind are U.S. Senators Jon Tester (Montana) and Joe Manchin (West Virginia). I don’t know what their goals are regarding even higher office. — tw

The “Universal Background Check” law is more about gun registration than it is background checks. We already have a state universal background check law here in Washington state, and all our pistol and semiauto-rifle transfers, including private sales info, is kept indefinitely at the Department of Licensing in Olympia. Couple this to the fact that we also have a Red Flag Law in place, pretty much makes the Second Amendment null and void.— 2FINNon Gun-Tests.com

Re “Firing Line, Lefties Sound Off On Holsters,” November 2019

Being an ambidextrous shooter, it’s good to hear that there’s more availability of left-hand holsters, and I definitely like the Kydex. — Original Tasmanian on Gun-Tests.com

Todd: Those who grew up in the Age of Aquarius are now living in the Age of Arthritis. Tip-up pistols provide a solution for weaker arthritic hands, but are currently only available in 22, 25 and 32 calibers. The Beretta 86 in 380 provided at least a marginally effective defensive pistol. It has not been manufactured for years, and now often sells for more than $1,000 at auction. If some company could make a tip-up in 380 ACP or 9mm, it would find a large market. — Taylor, Hero’s Arms, South Hero, Vermont

The tip-up models from Beretta are indeed easy to operate. The 84 and 85 models are chambered for 380 ACP. The Model 86 is likewise chambered for the 380 ACP, but has a redesigned front end with a tip-up barrel that hinges at the muzzle to open the breech. This allows the shooter to load a cartridge directly into the chamber, and not have to operate the slide. I am happy to float the idea to the Gun Tests readership so they can pester Beretta to maybe reintroduce the 86 in 380 ACP or some other chambering. I’m thinking 22 Magnum might also be popular. — tw