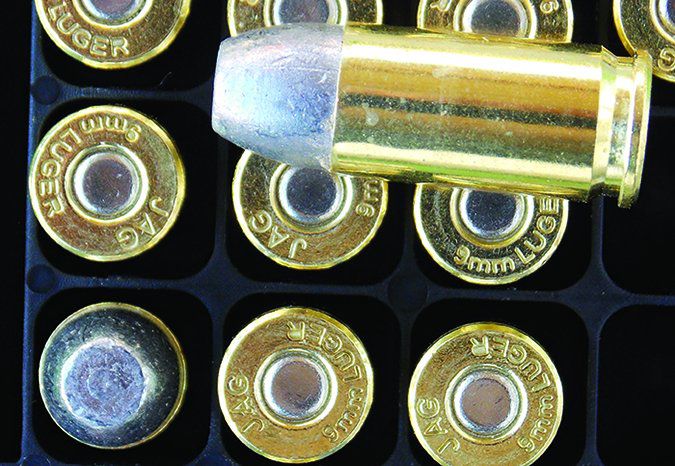 Hey guys, I just finished reading this issue, and I had to let you know I thought it was great. I really appreciate the heavy 9mm loads article. I don’t have the time or resources to buy and test a bunch of loads, even though I am very interested in selecting a load for my 9mm that fits my needs. You guys did all the work for me! I trust your opinions and appreciate your straightforward approach to testing and review. I now have a few options that I can try to see if they work for me personally. Case in point, I recently went on a hiking trip with my 12-year-old son in cougar, bear, and, unfortunately, now wolf country. I had to choose between a high-capacity 9mm and a 5-round 357 Magnum. I went with the magnum for better penetration potential. But after reading your article, I am definitely going to pick up some Buffalo Bore Outdoorsman Hard Cast Lead Flat Nose cartridges and see if I can get the best of both worlds. Thanks for the great magazine and keep up the good work! — Matt

I see that you are planning to test plastic and kydex holsters. I have a request: Please include something in your tests to see if the holsters might switch off the safeties on 1911-style handguns. I have been buying a particular brand of IWB holster for many years, for many different guns. Until recently, they were made of formed kydex. I recently bought three replacement holsters for 5-inch and Commander-length 1911s, all with factory stock safeties. These seem to be an injection-molded plastic. On several occasions, I noticed a holstered 1911 with the safety off. The first time it happened, I assumed I had made the error, which seemed odd because I holster with my thumb under the safety pushing up. The next time I assumed a bad plunger spring or some other mechanical defect. I couldn’t find an obvious problem, so I switched to a different gun. When I found the safety off on that gun also, I decided I’d better diagnose the cause.

What I eventually found was that even when the holster tension was properly adjusted and the gun clicked in, the gun could still move back and forth a bit when the butt was pushed forward, as when I was sitting down. I could actually see the plungers pushed in by the holsters pushing on the safeties. I also found rub marks on all three holsters where the tip of the safeties came in contact with the plastic.

I believe this is an unsafe condition for guns with a thumb safety, such as the 1911. (I also bought one of the new-design holsters for a Glock. That one works just fine.) I’ve been in contact with the holster manufacturer, and am waiting for them to run their own tests. May I suggest you include this potential problem in your tests? Thanks! — John

Hey John: You’re right, that’s a safety issue. Bob Campbell has a thorough shakedown routine for all holster tests, and if this condition existed, we’d mention it, show how it happens, and fail the holster. Please check this issue for our most recent comparison of IWB types. — Todd Woodard

Hi Todd: Read your recent article and was prompted to send you a note. I am a World War II veteran and have always been a firearms person, and Gun Tests is my reading matter when I want to buy a new gun. In reading the November issue, I came across an article where you were testing 9mm pistols. Seems like a lot of old-timers like me are having problems, like I am, racking the gun, so I read the article and was quite surprised to find your choice out of the five guns was the Taurus G2S. It seemed like the selection was the answer to my problem, so I ordered one from Buds and some ammo, and I hung a laser on it. I attached a photo. I couldn’t be happier! The gun is a single stack, and my small hand fits it like a glove.

Well, let’s give proper mention to Contributing Editor Bob Campbell for that story. We added the slide-retraction effort measurement to pistol evaluations a while back, and I’m still adjusting to how important many people consider that line item to be. I shouldn’t be surprised, of course — reasonable folks won’t like (and won’t buy) a gun they can’t operate easily and safely. — tw

Todd, I just heard that Walther is bringing back the PPK and PPK/S for sale in the U.S. once again. I hope you can do an evaluation on the new models and see if they are any better than the one tested in August of this year. I know that in the last test you rated it a “C” and recommended not to buy the Walther, which I understand. But they are sooooo cool. — Carl

They are cool, but I wish the platform would evolve, like the 1911 has. I owned a stainless PPK/S years ago, and I don’t regret selling it. A gunsmith mentioned later in this issue, Ross Carter, had toyed with the idea of updating the PPK-PPK/S handguns with an extended beavertail, better trigger, lighter frame, and better sights, but it never came to fruition. That’s a lot for Walther to fix to make the handgun more competitive. Maybe Glock can buy the tooling and create a Polymer PPK. — tw

Sirs: I just finished reading this article. You recommend the Savage Model 12FV. When I go to the Savage site, I cannot find such a model. What am I doing wrong? I have been receiving your publication ever since the first issue came out. Keep up the good work. — Dr. Les

This time of year, models come and go at a rapid pace, so in the intervening time between when we started the test and when it was published, Savage may have decommissioned the 12FV. I did a DuckDuckGo search for “Savage Model 12FV 18393” and found several retailers offering it. Cabelas.com was the top hit with a sale price for the 308 Win. of $380. — tw

I love my 31-year-old Smith & Wesson 52-2, my old Feinwerkbau 65 MK1, as well as my brand-new Steyr LP10 air pistol at 10 meters, but I am thinking of buying a 1911 for target purposes and upgrading it myself. I think the Springfield Range Officer Elite Target 45 ACP is a great target entry-level 1911 with a great price point. It has been manufactured for target use, so it should be more accurate than the predecessor Range Officer and have a better trigger and better finish. The RO Elite target was launched about a year and a half ago. I have it in my wish list with some nice upgrades, such as an extended beveled magazine well from Ed Brown, a trigger-pull kit for better and lower weight of 3.5 pounds from Cylinder & Slide, a flat recoil spring from Wilson Combat, and a new grip with checkered front strap for better grip. I think that investing no more than $311 plus the online retailer price of $809 for a total of $1120 would be a good investment in a great 1911.

Before I do that, though, I think that Colt’s Gold Cup Trophy, Dan Wesson Pointman Seven, the SW1911 from the Performance Center, or a Kimber Team Match II would be great handguns to match up against RO Elite Target in 45 ACP. Maybe one of those would be a better starting point. Please include trigger-pull weight out of the box. I can’t find one in a local shop to feel it, so I am counting on your test before I would buy it online through my FFL. Have a nice day. — F.

Sorry, we haven’t had a chance to shoot the Range Officer Elite Target PI9128E. It’s been mentioned as a new product, but it hasn’t formally been tested yet. But it’s in the works. — tw

Re “Cowboy Up with Lever Guns From Cimarron, Uberti, Taylor’s,” November 2018

I’m a subscriber, and am looking at purchasing a rifle chambered in 45/70. As you noted in the November 2018 article comparing 38 Special lever-action rifles, the T&C rifle was your top pick, though expensive. I’m wondering if this would hold true for the 45/70? I would consider it if so. — Greg

Hey Greg: I shy away from making generalizations from one gun to another in a company’s lineup. Still, if a firm like Taylor’s & Co. has a good product in a certain style of rifle, it’s worth a look. Contributing Editor Robert Sadowski pointed out that Taylor’s makes a repro Model 1886 in 45/70, and he will attempt to match up some 45/70 rifles and see how they do. — tw

I’m a long-time subscriber. Really like the changes you are making in your publication. I found a typo in your December 2018 S&W Model 637-2 38 Special specifications. It lists the maximum width as 4.1 inches! That would be a hefty firearm to conceal carry. — Rick

Yes, that dimension should 1.4 inches. Thank you for pointing it out. I’ll correct it online — tw